This spring the Cloisters, the branch of the Metropolitan Museum of Art that showcases the art and architecture of medieval Europe, is celebrating its 75th anniversary.  The most famous (and probably most beloved) items in the collection are the Unicorn Tapestries, the seven tapestries that tell the story of the hunt for this elusive animal.  A special exhibit about the unicorn is on display at the Cloisters through August 18th.

Unicorn horns and their purported medicinal uses are described in a variety of early books on drugs and natural history.  One of these, Pierre Pomet’s Histoire generale des drogues, traitant des plantes, des animaux, & des mineraux… (Paris, 1694) contains a detailed section on the unicorn, complete with an illustration of the five types of unicorns: 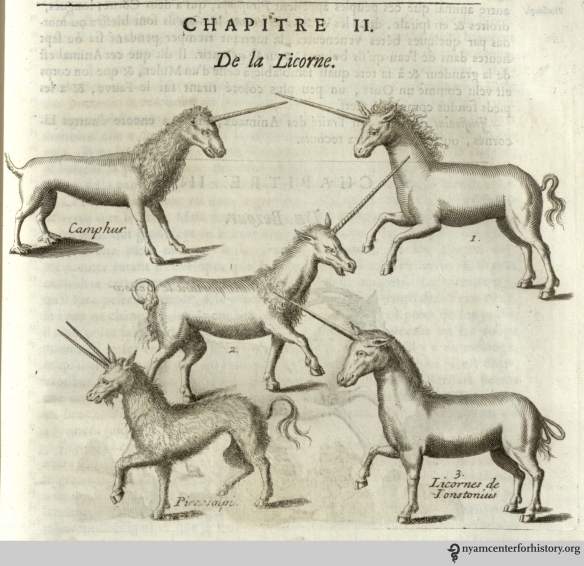 Pomet (1658-1699), a druggist to Louis XIV, also maintained an apothecary shop in Paris.  His Histoire was first translated into English in 1712, and appeared in a second edition in 1725.  The book contains detailed information about plant-based remedies, but also describes the compounding of various cures made from parts of exotic animals, metals, minerals, stones, and a variety of other substances.  In the case of the unicorn, Pomet admits almost immediately that what is sold by apothecaries as unicorn horn comes not from a unicorn at all, but from a fish, the narwhal, whose attributes he describes later in the animal section of the book. Of course, Pomet was wrong to describe the narwhal as a fish, as it is really a species of whale and whales are mammals.

The horns of unicorns and narwhals were believed to be effective as an antidote to all kinds of poisons and to cure various unspecified plagues and fevers.  Some people wore the horns as protective amulets, while others collected complete horns as curiosities for display.  While Pomet offers many details about both unicorns and narwhals, he hedges his bets regarding their efficacy, explaining that while some people believe in their worth, “I shall neither authorize nor contradict, having never had sufficient Experience of it.”

3 thoughts on “Of Unicorns on Land and Sea”