Ellis Island opened on January 1, 1892, a gateway to the United States for 700 immigrants on three steamships that first day.1 By its close in 1924, more than 12 million people had passed through to America.2

Landing at Ellis Island. From “Quarantine Sketches.” Click to enlarge.

About 10 years after Ellis Island’s opening, The Maltine Company, a patent medicine manufacturer, released “Quarantine Sketches: Glimpses of America’s Threshold,” a pamphlet oddly juxtaposing photographs of Ellis Island with advertising for its products. The full pamphlet can be viewed online:

It begins with the text:

Hundreds of thousands—men, women, and children—pass over, or are detained at, the Doorstep of America every year. In this pamphlet are illustrated the various precautions which the Government takes to insure desirable material for future citizenship.

One such precaution described in the pamphlet was the two-day quarantine of all passengers arriving from Cuba between May 15 and October 1, an effort to prevent the spread of yellow fever in the United States. But for all other steerage passengers, the procedure was different. 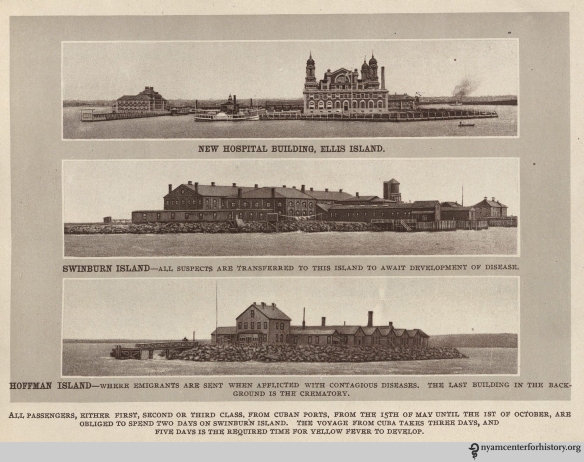 The hospital at Ellis Island. From “Quarantine Sketches.” Click to enlarge.

During the “Line Inspection,” United States Public Health Service physicians reviewed each entrant as he or she walked past. According to a 1917 article, the process typically took two to three hours.3 Those who passed the initial review continued on to the Immigration Service, “who take every means to see that he is not an anarchist, bigamist, pauper, criminal, or otherwise unfit.”3 Those who did not pass the inspection, about 15–20% of immigrants in 1917, were routed to the Public Health Service.3

There, physicians assessed immigrants for “speech, pupil symptoms, goiters, palsies, atrophies, scars, skin lesions, gaits, and other physical signs,” along with “signs and symptoms of mental disease.”3 Some got sent to Ellis Island’s hospital (one of the best in the country), some to a detention room for further assessment.4

Filing past the doctors. From “Quarantine Sketches.” Click to enlarge.

Would-be immigrants could be deported for medical reasons—in 1898, 18% of deportations were medical; this rose to 69% in 1916.4 Even so, most immigrants entered the United States: in 1914, the peak year for deportations, only 2.5% of passengers were forced to return to their country of origin.4

Today, you can visit Ellis Island without going through a Line Inspection. You can even book a Hard Hat Tour to see the previously closed-to-the-public hospital complex. Can’t make the trip? Take a look at Hyperallergic’s recent Ellis Island hospital portraits.