Today, Peter Mark Roget (1779–1869) is best remembered for his eponymous thesaurus. But Roget’s first accomplishments were in the fields of medicine and science. The lauded children’s book The Right Word: Roget and His Thesaurus, which won both a Robert F. Sibert Medal and a Caldecott Honor at February’s ALA Youth Media Awards, inspired me to take a closer look at the man and his achievements. (I highly recommend the book to young readers—and older ones—interested in science and history.)

Roget had many interests. He was a practicing physician, secretary of the Royal Society of London for 20 years, and an original contributor to the Encyclopaedia Britannica. He invented a slide rule, improved the kaleidoscope and other optical toys and tools, studied the use and effects of nitrous oxide, and wrote books on subjects as diverse as phrenology, electricity, and physiology.1,2 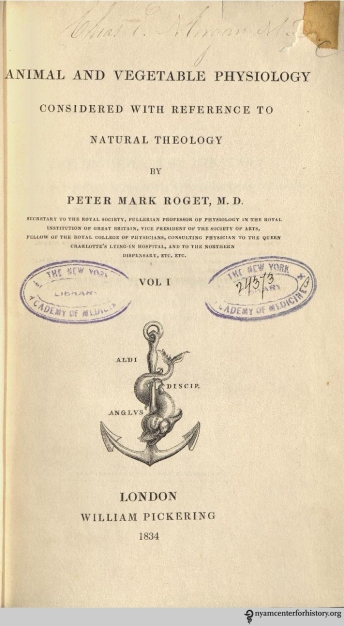 We hold several of his works in our library, including three of the five editions of Animal and Vegetable Physiology Considered with Reference to Natural Theology.

Roget and his peers believed this two-volume work, first published in 1834, would be his seminal achievement and the foundation of his legacy.1,3 The work was the fifth of eight treatises commissioned in the will of Francis Henry Egerton, the eighth Earl of Bridgewater, who endowed the creation of 1,000 copies of work “on the power, wisdom, and goodness of God, as manifested in the creation; illustrating such work by all reasonable arguments.”1

In less than three years, Roget compiled this 600 page work, “a monument to [his] capacity for work—prolonged, resourceful, highly organized labor.” He “[ransacked] his own library, and the libraries and museum collections of most of the scientific institutions in town, and [drew] on his own writings as well as the current work appearing in British and European journals.”3

“All the bones composing the skeleton in other vertebrate animals exist also in the tortoise.” Animal and Vegetable Physiology, 1834, p. 465.

In the first volume, Roget offers a classification scheme taken from the work of French naturalist Georges Cuvier. In the second, he delves into comparative physiology, including an argument—common at the time—that nature’s design proved the existence of God. The volumes contain lovely imagery, though of the 436 illustrations, only about 12 drawings by entomologist George Newport are original to the work.1 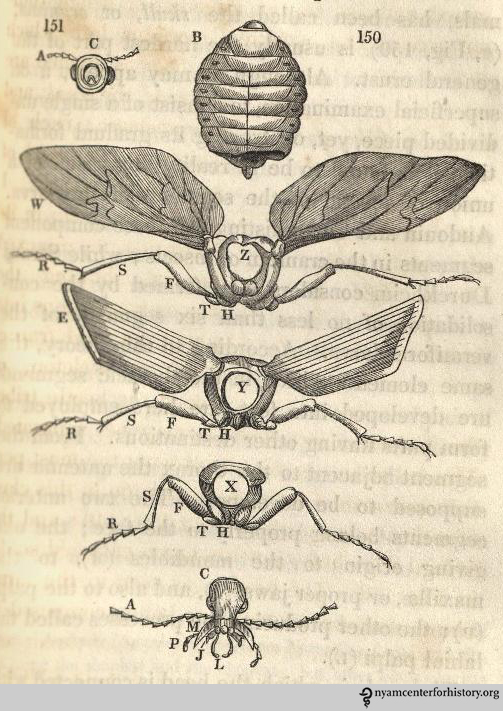 The aim of the work was to bring order to the field of comparative anatomy rather than to present new scientific thinking.3 Roget, a meticulous organizer, wrote in the preface:

“[I] have admitted only such facts as afford manifest evidences of design. These facts I have studied to arrange in that methodized order, and to unite in those comprehensive generalization, which not only conduce to their more ready acquisition and retention in memory, but tend also to enlarge our views of their mutual connexions, and of their subordination to the general plan of creation. My endeavors have been directed to give to the subject that unity of design, and that scientific form, which are generally wanting in books professedly treating Natural Theology…”4

A skeleton of a swan. “In order that the body may be exactly balanced while the bird is flying, its centre of gravity must be brought precisely under the line connecting the articulation of the wings and the trunk…” Animal and Vegetable Physiology, 1834, p. 559.

Only five years after Roget published Animal and Vegetable Physiology, Darwin’s Voyage of the Beagle made its debut, followed in 1859 by his Origin of the Species. Roget’s work became little more than a footnote in scientific history.

But his real legacy-creating work was still to come: In 1852, Roget published the first edition of his thesaurus, the culmination of a lifetime interest in list building. By his death in 1869 at the age of 90, the thesaurus had gone through 28 printings. It has never been out of print.2

3 thoughts on “Roget Beyond the Thesaurus”