So unsuspected violets
Within the fields lie low,
Too late for striving fingers
That passed, an hour ago. 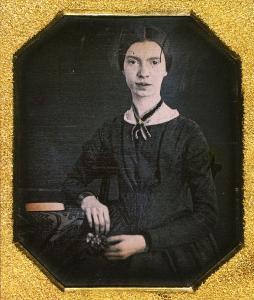 Daguerreotype of Emily Dickinson, from the collection of Amherst College.

Emily Dickinson fell early and fast for flowers. Her poetry is full of the blooms and buds that signal the awakening of spring. There’s her crocus, “Spring’s first conviction” (Letter 891) “stir[ring] its lids,” (J10) her May-Flower, “pink small and punctual,” (J 3) and her “chubby” daffodil with its “yellow bonnet” (J 10 and J4), among an army of many other blossoms that decorate her pages.

As her biographer Alfred Habegger has noted, the poet spent hours as a girl in the 1840s roaming the woods and fields near her Amherst, Massachusetts home, looking for flowers. In many cases, these were sent to friends, but the poet also kept some for herself. Her first assembled collection was not, as one might expect, a collection of writing, but a collection of plant specimens.2

Dickinson likely began her herbarium when she was 14, in 1845.3 It has been fully digitized by Harvard’s Houghton Library (all 66 pages can be viewed here). Several of the texts that influenced Dickinson’s flower collection are available in our library. 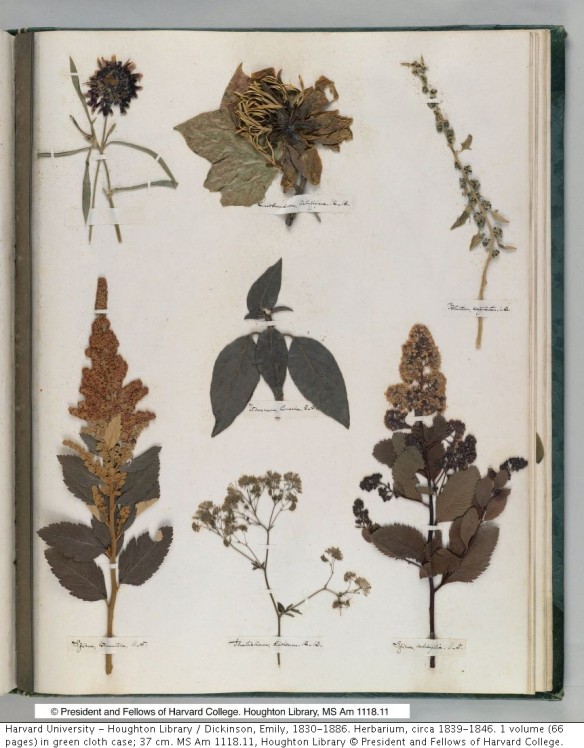 A page of Dickinson’s herbarium, courtesy of Harvard University’s Houghton Library, including specimens of Liriodendron tulipfera and of the rare Chenopodium capitatum (strawberry blite).

In 1845, Dickinson was enrolled in both botany and Latin at Amherst Academy. Coursework in both subjects was instrumental in her identification and labeling of plants.

In use at Amherst during Dickinson’s time was Almira Lincoln Phelps’ textbook, Familiar Lectures on Botany, first published in 1829.4 Phelps, a pioneer educator and only the second woman elected a member of the American Association for the Advancement of Science, was the sister of the American education reformer Emma Willard.5 Phelps probably taught at Amherst Academy for at least one term, using the Familiar Lectures. Her textbook was certainly known and used by Dickinson.6 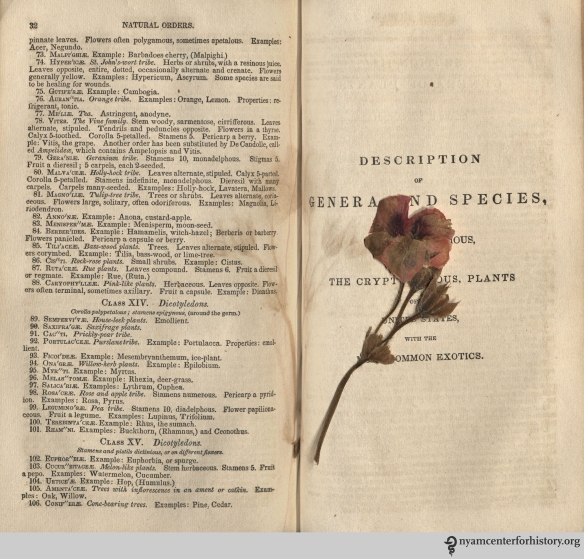 In the prefatory note to Familiar Lectures, Phelps describes how as a teacher of botany she struggled to find suitable textbooks, and composed the lessons within to fill this gap.7 Benjamin Smith Barton’s The Elements of Botany, while beautifully illustrated, was very out of date by the late 1820s, and written in an archaic language unsuitable for young students.8 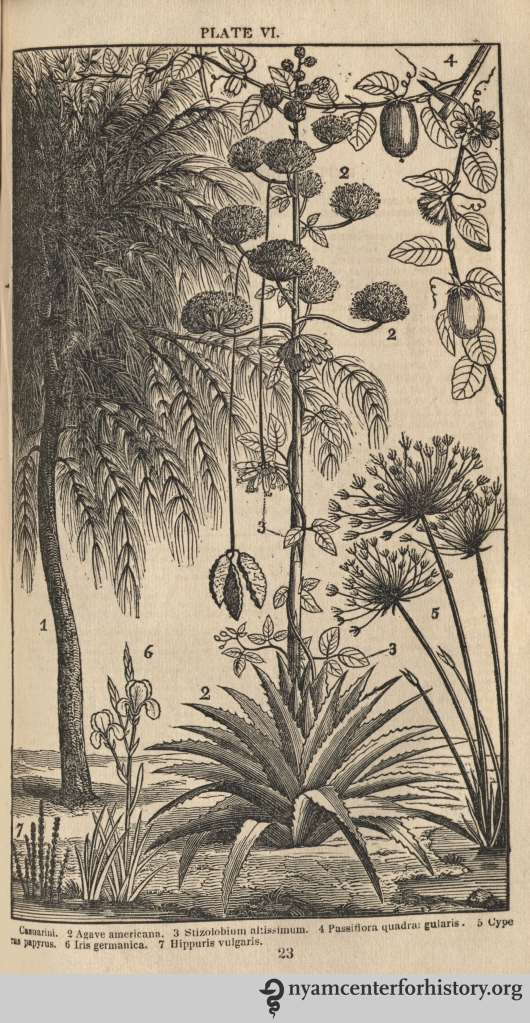 Familiar Lectures, sometimes called Mrs. Lincoln’s Botany, became the standard textbook for young students, and went through at least 39 editions. The volume contains a prefatory note directed at teachers that tells us about Phelps’ pedagogical style, and what Dickinson may have experienced in her classroom:

Each member is presented with a flower for analysis….The names of the different parts of the flower are then explained; each pupil being directed to dissect and examine her flower as we proceed. ..After noticing the parts…the pupils are prepared to understand the principles on which the artificial classes are founded, and to trace the plant to its proper class, order, & c. At each step, they are required to examine their floors, and to answer simultaneously the questions proposed; as, how many stamens has your flower?9

Phelps taught her students the Linnaean system of identifying specimens: the number of stamens in a flower would determine its class, and the number of pistils, its order. Successive editions of Phelps’ text acknowledged the new “natural” system of classification, a system that moved away from stamen and pistil counting, but discarded the new method as too complex for students.10 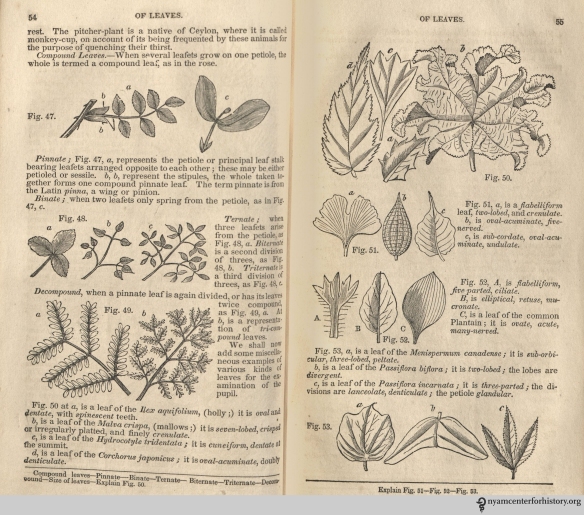 “Of leaves.” In Phelps’ Familiar Lectures on Botany, 1838. Click to enlarge.

Dickinson’s biographer Alfred Habegger emphasizes Phelps’ belief that botany was a subject well-suited to females, and that Dickinson herself characterized plants most frequently as female, and, by extension, as central to the role of playing female:

That the poet thought of flowers as female suggests her love of plants owed more to culture than science….Pressed between the pages of a letter, they became a medium of exchange between her and her friends, those of her own sex especially. Cultivated indoors, especially after a conservatory was added to the Dickinson Homestead, they became a consuming avocation.11

Emily Dickinson seems to have consulted another book for the organization of her specimens. That book was Amos Eaton’s Manual of Botany, for the Northern and Middle States of America. 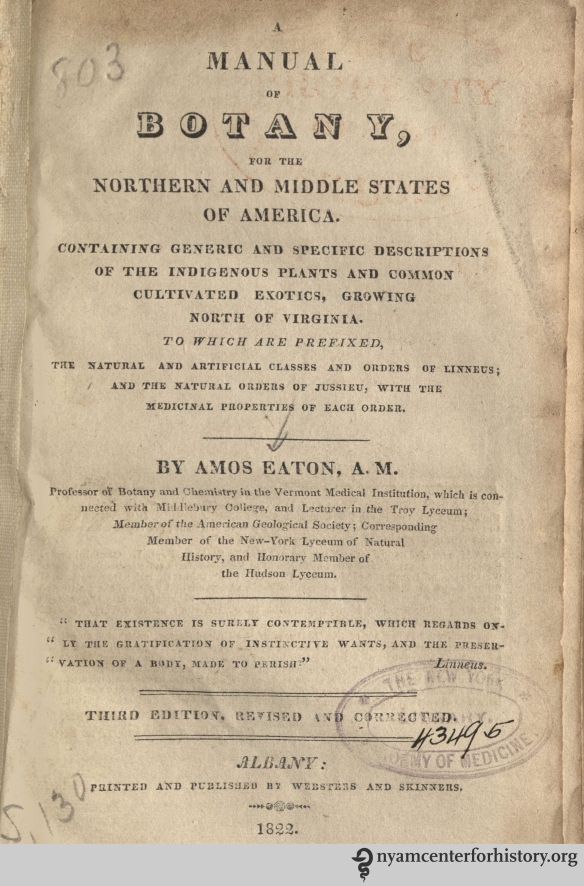 Eaton, a botanist and geologist, had mentored Phelps during her time at Emma Willard’s Female Seminary in Troy. It was Eaton who had first encouraged the publication of Familiar Lectures.12 Dickinson likely used Eaton’s manual to identify the specimens she gathered on walks in the woods. She labelled her specimens in accordance with Eaton’s Linnaean numbering system, in which the class and order correspond to number of stamens and pistils, probably unaware that by this time, the method had been largely discounted.13

Dickinson also consulted Edward Hitchcock’s Catalogue of Plants growing without cultivation within thirty miles of Amherst College in the creation of her herbarium. The text Dickinson used was published in 1829, but our copy, revised by Edward Tuckerman, dates to 1875. Hitchcock was president at nearby Amherst College, and the area’s most eminent naturalist. He’s especially remembered for his geological contributions (Hitchcock led the first geological survey in Massachusetts after studying dinosaur footprints). “Hitchcock’s guide includes many rare plants native to Massachusetts also collected by Dickinson, including the very rare strawberry blite, cancer root (found near Mt. Holyoke), and verbena (found in South Hadley).14 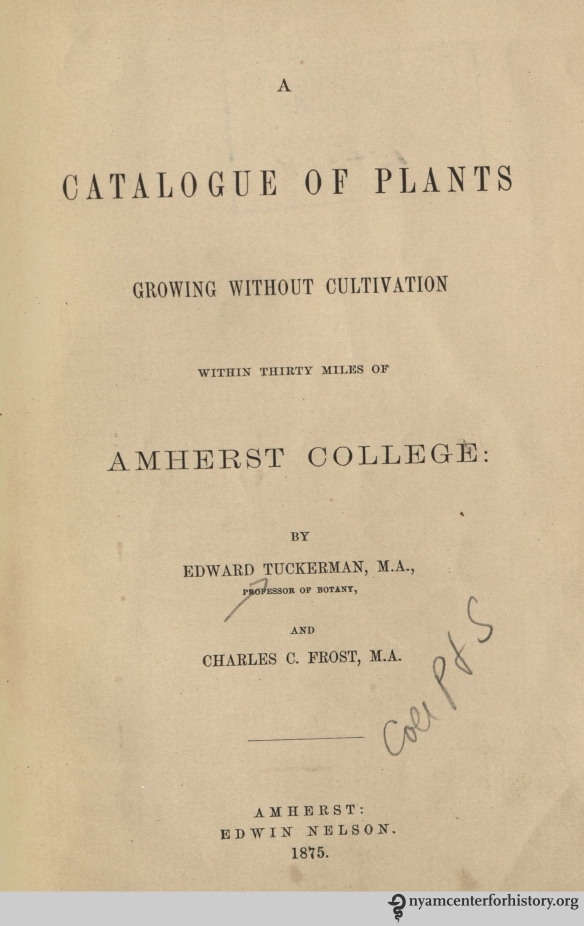 Title page of Tuckerman and Frost’s A Catalogue of Plants, 1875.

Dickinson refers to Hitchcock in an 1877 letter to T.W. Higginson:

When Flowers annually died and I was a child, I used to read Dr Hitchcock’s Book on the Flowers of North America. This comforted their Absence–assuring me they lived.” (Letter 488)15

Dickinson seems to have confused the authorship of the book she mentions above; here, too, she’s likely referring to Eaton’s Manual of Botany for North America.

Phelps, Eaton, and Hitchcock’s texts all influenced Dickinson’s impressions of the natural world in girlhood. As a mature poet, as her physical reach and exploration of the natural world became more and more limited, the plants familiar to her from girlhood stuck, fixing their roots all the more deeply in her mind.

Perhaps you’d like to buy a flower?
But I could never sell.
If you would like to borrow
Until the daffodil

Unties her yellow bonnet
Beneath the village door,
Until the bees, from clover rows
Their hock and sherry draw,

Why, I will lend until just then,
But not an hour more!16

2. Habegger, Alfred. My Wars are Laid Away In Books The Life of Emily Dickinson. New York: Random House, 2001.

5 thoughts on ““How Many Stamens Has Your Flower?” The Botanical Education of Emily Dickinson”