Elizabeth Blackwell’s A Curious Herbal has quite a curious publication story.  We’ve transformed six images from this stunning eighteenth-century botanical first published in 1737 in London into coloring sheets. 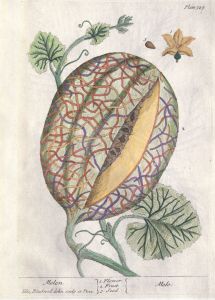 Aberdeen-born Elizabeth Blackwell (1700-1758), the daughter of a successful merchant, married her cousin Alexander Blackwell at age 28.  Though trained in reading Greek and Latin, Alexander practiced as a physician in Aberdeen, without appropriate permissions. The couple relocated to London when his right to practice medicine in Aberdeen was challenged.  In London, Blackwell opened a printing shop—again without the proper credentials, and again with less than stellar results.  When he couldn’t pay his business debts, he was installed at the city’s Highgate Prison.

Elizabeth, by then a mother, needed to find a way to support her family.  The printer’s shop she operated with her husband had made her a savvy observer of the book marketplace.  She realized that a new high quality herbal including New World species didn’t yet exist.  She took a room next to the Chelsea Physic Gardens, which exhibited some of the new American plants.  Later, she ferried the finished drawings to the prison at Highgate, where her husband supplied the Latin and Greek names of the plants and their uses. Some American plants, like sassafras, native to Virginia, were given only the English and Latin names.

Alexander also offered counsel on the plants’ medicinal uses.  The text accompanying sweet gum, here, “sweet cistus of candy” attests that it “Stays Vomiting” and that “the Fume of it Comforts the Brain” (we’re hoping that these same effects can be said about the practice of coloring these images).

Elizabeth was not only responsible for the drawings themselves, but did the engravings of the drawings on copper plates for printing.  In many copies, she hand-colored every single plate.  The images were first published at a rate of four a week, beginning in 1737, but through her own connections and market-savvy, she soon secured a book deal.  With the profits, Elizabeth was able to secure Alexander’s release from Highgate Prison, though their reunion was temporary (later he was put to death in Sweden for treason, though that is another story).

This week, we’re grateful that our own copy of Blackwell’s Curious Herbal is gloriously pristine so that we could transform them into a bouquet of coloring sheets.

In need of color specifics?  Blackwell’s text gives vivid, precise descriptions of the hues of her selected plants.  Great Bindweed (v.1, plate 38), which blooms in the late summer, has leaves that are “a willow green” with “Flowers white,” while her Female Piony possesses “leaves a grass green and flowers a fire crimson.” 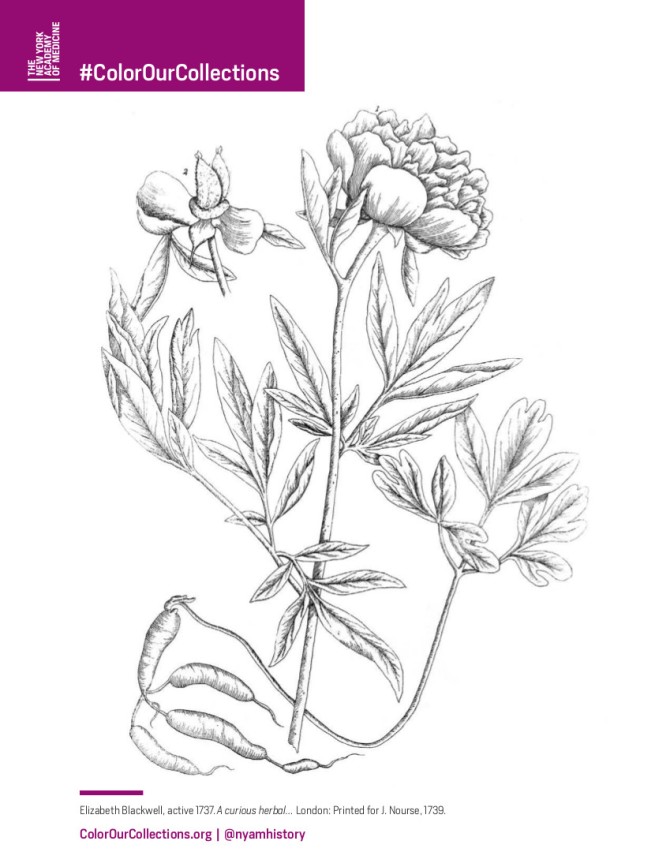 We leave it to you imaginative colorists to fill in these pages in any range of glorious hues you like!

While we’re on a plant theme, let’s take a look at some beautiful coloring pages from participating institutions. 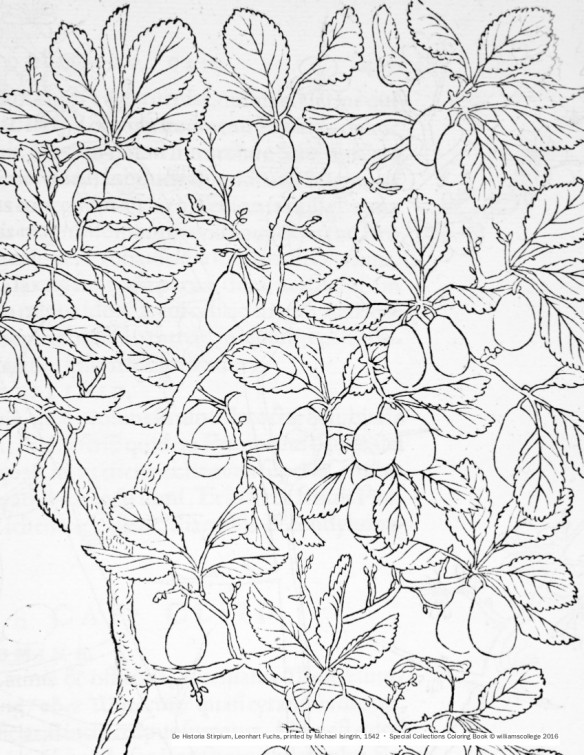 Don’t forget to check out more coloring books at colorourcollections.org!