“Is that page winking at me?”

I said this at the office last week, and it’s actually not the weirdest of the sentences I’ve uttered at work here at the library. Some of those include, “That’s the prettiest hairball I’ve ever seen!” and “Yeah, I do wish garlic cured the plague.”

In this case, the sixteenth–century page in question was winking at me (in a manner of speaking). Page 135 of our 1588 edition of Neapolitan natural scientist and polymath Giambattista della Porta’s Phytognomonica features a woodcut of eyebright. Eyebright is an alpine plant that gets its name for its use treating eye ailments. 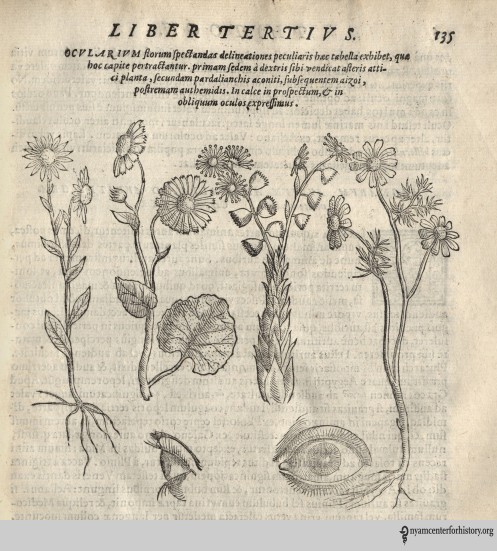 As this woodcut aims to make very clear with the frontal and side views on the bottom of the page, the fully open flower resembles a human eye. Image source: Giambattista della Porta, Phytognomonica (1588).

The resemblance of a plant to the body part or malady that it cures is a concept called the Doctrine of Signatures. Along with other early classical scholars, Roman natural philosopher Pliny the Elder and the Greek physician Dioscorides make reference to the Doctrine, but it was best developed by medieval Swiss physician and alchemist Paracelsus (1493-1591).[1] The Doctrine was widely believed in the West, especially in the sixteenth and seventeenth centuries, though it did persist beyond.[2] Nineteenth century American historian and novelist Edward Eggleston observed, “The wild woods were full of creatures (flora and fauna) whose value was written on each of them in the language of signatures … considerately tagged at the creation.”[3] I love this notion, not for its accuracy–it is not accurate, definitely do not eat a plant with heart-shaped leaves if you have heartburn–but because I think it’s a terrific design concept. Simply put, function dictates form and outward appearance reveals therapeutic value.

I’m not alone in affection for the “much-maligned” theory that biologist Bradley C. Bennett called “the Doctrine.” He argues that in many preliterate societies, the association of plant name with its medicinal uses helped people remember useful plants.[4] Similarly, anthropologist G. H. Shepard Jr. suggested such names or signatures are like a mnemonic device for peoples for whom knowledge transmission is oral.[5] Of course, the Doctrine had detractors. Flemish herbalist Rembert Dodoens declared it “absolutely unworthy of acceptance” in 1583.[6] It is inherently subjective (not a good thing for science)–a leaf that looks like a liver to me might look like a kidney to you. 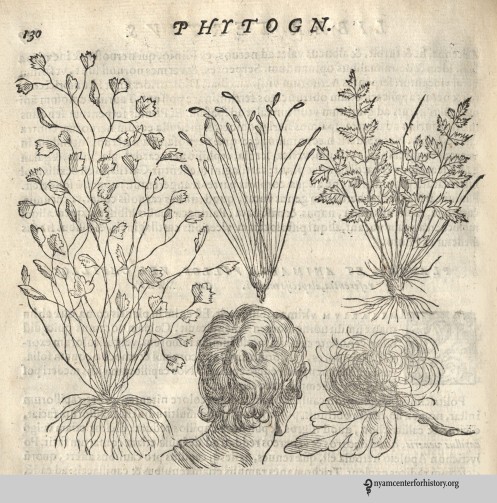 Signatures as a method to remember plants makes sense, particularly with all the scientific advances debunking the medical rationale since della Porta published his book. Bennett conducted an experiment that underscores the memory aid value of the Doctrine “that many valuable herbs were in use before the doctrine and that the organ-plant match was made later to accommodate and validate the doctrine.”[7] Of the over 2,500 plants with heart-shaped leaves, Bennett randomly selected 80. Twenty-one of those were used in medicine, and only three were used in cardiac medicine. So much for every ‘signed’ plant having therapeutic value.

So more accurately, the Doctrine of Signatures is a very human design concept. Indeed, it’s a human-centric design concept; seeing bits of ourselves in bits of plants. This makes sense when you consider that in della Porta’s time it was assumed the universe was created (by God) with mankind at the mortal pinnacle. And remarkably effective, not as a medical truism, but as a memory device.

For what is good design but a simple and powerful solution to a problem, in this case how to remember helpful plants. Not only is 20 percent of our brain devoted to vision, but there is a specific area in the frontal lobe of the brain critical to facial recognition: the fusiform gyrus. “We are hardwired to seek out a round object with two dark bands (one for the eyes, one for the mouth) even before we can see them clearly,” observes neuroscientist Andrew Tate.[8] Is it any wonder that people saw faces (not to mention other body parts) in the plants around them?