As part of the ongoing collaboration between the Brooklyn Institute for Social Research (BISR) and The New York Academy of Medicine Library, I was able to spend the beginning of summer contemplating how material and immaterial infrastructures affect peoples’ daily lives.

Throughout the BISR course titled “The Politics of Infrastructure,” taught by one of my favorite professors, Danya Glabau, we covered everything from why park benches are a certain length (so that people don’t sleep on them), to the United States’ unique economy of technological obsolescence. We took some deep dives into theoretical texts, such as Michelle Murphy’s Sick Building Syndrome and the Problem of Uncertainty and Bruno Latour’s Science in Action: How to Follow Scientists and Engineers Through Society. We were also encouraged to apply what we read to our daily lives. During my morning commutes, I suddenly found myself wondering if an umbrella or a subway car were inherently political objects (and what this might mean for their construction and use).

As always, there were beautiful treasures from the Academy Library that we were able to view during class, thanks to our Rare Books and Manuscripts Curator Anne Garner’s expansive knowledge of our holdings. One item she found for the class that was particularly striking was Stephen Smith’s The City That Was (1911).[1] We used this item as a complement to our unit titled “Infrastructure and Public Health,” where we read critical texts such as Paul Farmer’s “An Anthropology of Structural Violence” and Manjari Mahajan’s “Designing Epidemics: Models, Policy-Making, and Global Foreknowledge in India’s AIDS Epidemic.”

Image from Smith’s The City That Was (1911) showing the “Region of Bone-Boiling and Swill-Milk Nuisances.”

Smith was a New Yorker who many now regard as the father of public health. He founded the American Public Health Association and was the first to attribute the spread of typhus and cholera to environmental conditions around New York City.[2] Without him, New York would likely not have advanced into the public health-conscious city it is today (at least not as quickly). In The City That Was, Smith outlines through detailed illustrations various areas of the city that were public health concerns. I hate to imagine what Nolita’s trendy residents would think of their apartments if they knew they were once next to noxious hide-curing and fat-gathering houses.

Image from Smith’s The City That Was (1911) showing the “Region of Hide-Curing, Fat-Gathering, Fat and Soap Boiling, and Slaughter-Pens, Behind the Bowery Shopping Houses.”

While examining physical infrastructures, past and present, provided us with the tools to critique New York’s metropolitan landscape responsibly, we also learned about more cerebral types of infrastructure. One author whose work particularly struck me was Susan Leigh Star. In her article titled “Power, Technology and the Phenomenology of Conventions: On Being Allergic to Onions,” she examines the power of living in between worlds, and challenges her readers to question the idea of standardization. Of the latter, she brings attention to stoplights, writing: “The initial choice of red as a colour of traffic lights that means, ‘stop’, for example, is now a widespread convention that would be functionally impossible to change, yet it was initially arbitrary.” And it’s true — who decided that red meant stop? Why does red mean stop everywhere now, from stop signs to walk signals? 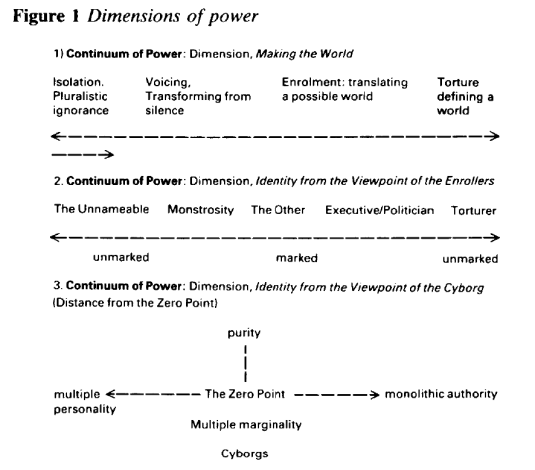 Diagram showing Star’s theory of the dimensions of power, from “Power, Technology and the Phenomenology of Conventions: On Being Allergic to Onions,” 1991.

For me, the power of Star’s scholarship really became solidified throughout her discussion of marginality, though. She writes:

“We are at once heterogeneous, split apart, multiple — and through living in multiple worlds without delegation, we have experience of a self unified only through action, work and the patchwork of collection biography . . . That is, in the case of Pasteur or any executive, much of the work is attributed back to the central figure, erasing the work of secretaries, wives, laboratory technicians, and all sorts of associates. When this invisible work . . . is recovered, a very different network is discovered as well . . . All of these ways of gaining access imply listening, rather than talking on behalf of. This often means refusing translation — resting uncomfortably but content with that which is wild to us.”[3]

As someone who works in the intersection of medicine and the social sciences, the ideas in the above quote seem especially relevant. Biological scientists hate lingering in the unknown, while social scientists get tenure by writing about it. The idea of a library whose collections reflect the chameleonic history of medicine likely exists in a space much like Star’s “multiple worlds.” And, similar to those lab technicians whose names you never read about when a team of scientists win the Nobel Prize, libraries function largely on invisible labor. Thanks to Star, I am getting more comfortable with my own brand of marginality, too.

Glabau lead us expertly down these paths and many more during my time as a BISR student in “The Politics of Infrastructure.” We are currently hosting another one of her classes (“Science, Race, and Colonialism“), so stay tuned for more synopses from the field.