Ain’t no sunshine when she’s gone….as the song goes, or, on a day like today, when the moon encroaches on the sun. With all eyes turned skywards, we’re taking the long view on star-gazing, looking back to many of our great sixteenth-century astronomy books for inspiration.  Last week, in honor of today’s solar eclipse, we hosted Atlas Obscura in our rare book room for a ticketed event highlighting some of our favorite images of the stars, planets and astronomers– those inquisitive heavenly creatures who made great strides in changing what we know about the physical universe.

A pocket-sized French book, Les fleurs et secrets de medicine, published around the turn of the 16th-century, offers this partially covered sun, in the image on the left.  On the right, from the same book, our hero, the astronomer.

After Homer’s Iliad and Odyssey, the most popular poem produced by the ancient Greeks was Aratus’ Phaenomena.  Aratus, born in Soli in Cilicia, lived in the late fourth and early third centuries B.C.E.  As a young man, he studied Stoic philosophy in Athens at the school founded by Zeno. Building on a tradition of didactic poetry exemplified by the epic poet Hesiod, the Phaenomena, Aratus’ only complete extant work, explained the constellations and the effects of the planets and stars on human event in verse. A Latin translation of the poem appears in our 1499 Astronomicae Veteres, a compilation of early astronomy texts printed by Aldus Manutius in Venice.  Many of the woodcut images of constellations accompanying the poem date to an earlier Venetian publication of Hyginus’ star atlas, printed by Erhard Ratholdt. 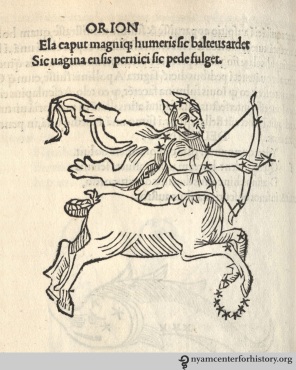 The image of the Pleiades in the illustrated Aratus can likely be attributed to the artist of the famous Hypnerotomachia Poliphili also published by Aldus Manutius in the same year.

The Academy Library has five copies of the Fasciculus Medicinae –a compilation of medical treatises, many from the medieval period first published in 1491 (our earliest edition dates to 1495).  This compiler was probably an Austrian physician named Kircheim, which the Italian publishers corrupted to Ketham.  Kircheim, born in Germany, was professor of medicine in Vienna in about 1460.

The Fasciculus Medicinae contains the earliest realistic anatomical images in print.  The book’s astonishing woodcut illustrations include skilled renderings of medieval prototypes including this one of Zodiac Man, below.  The woodcut offers a visual demonstration of the belief that the planets and stars governed the openings of the body.  The accompanying text advised when bloodletting could be safely done to treat different parts of the body, depending on the dominant sign. A variation of Zodiac Man continues to feature in astrological publications through the early twentieth-century, as a staple feature of the English and American almanac.

The sixteenth-century Spanish physician and surgeon Andrés de León includes this excellent Zodiac Man (below) in his 1590 De Annatomia.

The German monk Gregor Reisch is responsible for the astonishing Margarita Philosophica (Philosophical Pearl), first published in 1503. This early general encyclopedia purported to gather together all of the general knowledge considered mandatory for any real Renaissance man. The Margarita was used as a general textbook both for private study and in universities throughout Western Europe.  Our 1517 copy, published in Basil, includes arresting woodcut images, including a scene of Astronomia aiding Ptolemy in his sky-watching ventures, a Ptolemaic armillary sphere, and an image of celestial phenomena. 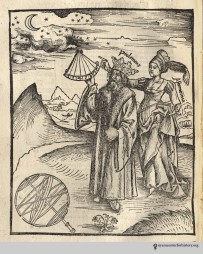 It also includes this timely woodcut (below), illustrating the various positions of the Earth, the Sun and the Moon when eclipses occur.

The Dalmatian author Federico Grisogono’s Pronostica offers readers a working volvelle (below) which could be used to predict the critical days of solar and lunar fevers. Attentive and star-savvy caregivers might be able to determine optimal treatment for their patients using Grisogono’s movable diagnostic tool (but don’t ask us to forecast the day your fever will lift, it’s complicated!). 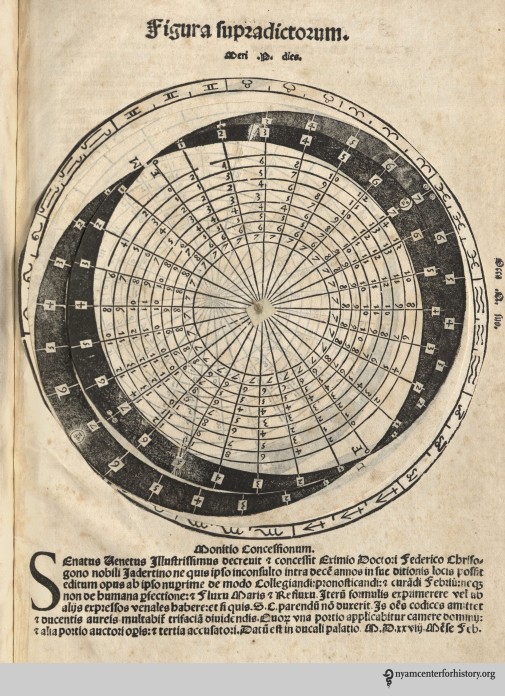 Finally, we’d be remiss if we didn’t include the astronomy publication that causes the big(gest) bang of the century. In 1543, Mikolaj Kopernik (better known to us by his Latin name Nicholas Copernicus) published his watershed De revolutionibus orbium coelestium libri sex, or six books on the revolution of the heavenly spheres, shortly before his death. The book recorded Copernicus’ assertion that the planets revolve around the Sun, and not the Earth.  Copernicus’ ideas are taken by two later Renaissance astronomers who solidify his work. Tycho Brahe uses his heliocentric assertion to collect observations of the sun. Johannes Kepler does the heavy-lifting in terms of calculations, applying Tycho Brahe’s data to Copernicus’ heliocentric assertions and working them out mathematically.

Copernicus’ work created aftershocks for scientific observers attempting to map the physical universe, similar to those produced by Andreas Vesalius when he published his landmark De fabrica humani corporis (thus altering the anatomical map of the body) that same year.  Our edition of De revolutionibus is the second, from 1566.

Incidentally, you can consult another famous astronomer’s work, Cardano’s Libelli quinque, to see this nativity, or astrological chart for Andreas Vesalius’ life (as well as charts for other Renaissance celebrities like Albrecht Durer, Martin Luther, and a Medici or two).

Thanks to attendee Jasmine for this great pic!