The New York Academy of Medicine Library has contributed nine digitized titles (11 volumes) on medical botany to the Biodiversity Heritage Library (BHL) as part of the Expanding Access to Biodiversity Literature project.   It is very exciting to share some of the Academy Library’s botanical resources with the wider public.

While the Library’s collections include a large number of printed botanical books dating back to the beginning of the sixteenth century, for this project we were interested in identifying resources that could be sent to the Internet Archive for external digitization, which meant that we concentrated on our holdings from the second half of the 19th century forward through 1922.  After generating lists from our online catalog, we checked to see if any of these resources had already been digitized by the BHL, Internet Archive, or HathiTrust.  For this process, we developed a set of simple guidelines.

We went through multiple lists and rounds of de-duplication to narrow down our potential submission.  Once we finalized the list, Scott Devine, Head of Preservation, conducted a conservation assessment to determine which resources could be sent out for digitization and which were so fragile that they could only be digitized in house.  We separated these into two lists.  The first list was sent to the Internet Archive for digitization and is our contribution to BHL.   The second list will be a project for our new digital lab and we hope to make them available at a future date. 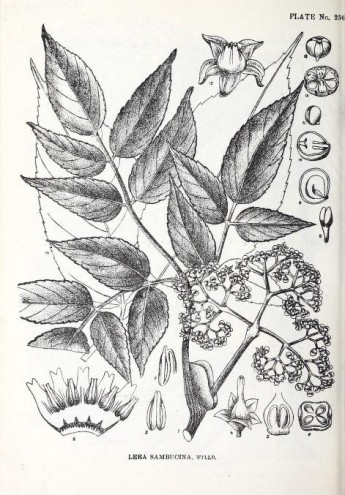 Although Indian medicinal plants did not focus on the use of plants in the development of drugs, this theme can be seen throughout the resources submitted to the BHL. Each author grapples with the role of plants in the creation and production of drugs.

A course in botany and pharmacognosy (1902), plate #1 showing organized cell-contents.

In A course in botany and pharmacognosy (1902), Henry Kraemer, Professor of Botany and Pharmacognosy, defines pharmacognosy as the “study of drugs of vegetable origins.” Kraemer devotes the first part of his text to plant morphology and the second part to pharmacognosy.  In addition, he provides illustrations to aid in the study of both parts so that students can connect the descriptions throughout the text to the visual representations.

Youngken’s Pharmaceutical botany, 2nd edition (1918) was expanded to take advantage of the growing area of botany, including a section on drug-yielding plants.  The text focuses on the morphology and taxonomy of plants used in drug development.

In Pharmacal plants and their culture (1912), Schneider argues that the majority of imported plants used in medicine could already be available in the United States.  He focuses on California and outlines what can be cultivated and grown in the state.  Schneider provides a list of uses and common names.

The medicinal plants of Tennnessee (1894) is an observational inventory of Tennessee’s plants and their descriptions based on a similar project conducted by North Carolina.  Published by the Tennessee Department of Agriculture, the report emphasizes the importance of documenting and understanding the native plants of Tennessee and how they can help increase usage and revenue.

Overall, readers of this collection can begin to understand the role of plants in the creation, development and economic viability of drugs.  Many of the resources provide some form of inventory, index or list that documents the plants and associated drugs.

All titles submitted by the Academy Library to BHL:

The BHL Expanding Access project is funded by the Institute of Museum and Library Services (IMLS).