As children we learn the basics of hygiene, but as adults sometimes we forget how to keep our bodies strong and healthy. The 1922 children’s book The Land of Health teaches how to stay healthy and prevent the spread of disease through a series of stories, culminating in the tale of how children Tom and Sally become full citizens of the Land of Health. It’s one of a number of books for children in our collection.

This book is written as a fairy tale: Dame Nature takes the children on a journey with her five helpers, Mr. Wind, Madam Rain, my Lord Sun, Sir Food, and Lady Sleep. The Christmas Carol/Alice in Wonderland mash-up shrinks the children to a size that fits into Tom’s toy village, where Dame Nature’s helpers take the children on very detailed adventures in the Land of Health. In these chapters, children, and even adults, learn (among a lot of other things) the importance of keeping clothes clean, how waste matter comes out through the skin, and what carrots are made of.

All living things need sunlight to live and vegetables store sunlight. It is this energy “that gives you the power to live and grow and move about.” From Hallock and Winslow, The Land of Health. New York: Charles E. Merrill, 1922.

This journey reinforces that by keeping your “body castle” and your surroundings clean you can help make the world a safer place. If a germ happens to finagle its way in, the Board of Health spends its “time guarding the health of the citizens.” At the end of the journey Tom and Sally are outside the village in “Dirtyville,” where the flies live that carry the germs to the Land of Health. They learn that the best way to control their population is to cover garbage cans and clear dirt and rubbish away so they cannot breed.

In each chapter, verses help us remember the lessons and a series of questions reinforce positive health behavior. In the end, the children must repeat these verses for Dame Nature to grant them citizenship into the Land of Health.

Some verses that stick in your head:

“Every day I must take pride
In cleaning out myself inside.”

“Coffee, alcohol, and tea,
I know are very bad for me.”

“The proper foods for me to eat
Are simple ones and clean.
A pint of milk each day I need
And vegetables green
The time to eat is during meals
And never in between.”

And questions that make you ponder:

“Make a list of the things you have eaten in the last day or two. Are you building your house of straw and sticks or of bricks?”

“Why should you wear loose clothes?”

“What does the skin do for the body?”

“Why should waste matter be cleared out of the body each morning?”

“How do your hair and fingernails show whether you take pride in your body castle?”

A child can become a full citizen of the Land of Health by following these basic tenets:

From Hallock and Winslow, The Land of Health. NY: Charles E. Merrill. 1922.

Certainly, these are good rules to live by in the world today. If each of us follows these simple rules we can create a “Happy Village” in which everyone has a chance to thrive and be free from germs and disease. To do that, we need to avoid “Enemies’ Country” (which, sadly for us adults, is where all the coffee and tea lives. Maybe just adults can drink them and still live in the Land of Health?) . 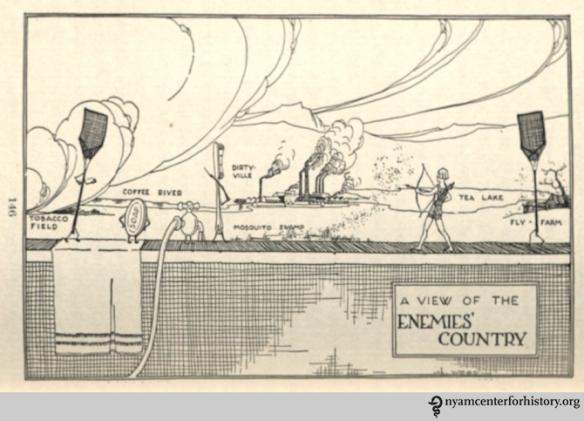 One of the book’s poetic reminders of how to stay healthy is an excellent verse for the coming cold and flu season:

“Sickness germs I must defeat,
And so I wash before I eat;
I never touch my nose or lips
With pencils coins or finger-tips
I keep away from those who sneeze,
For they may have a germ disease;
And when I cough or sneeze or sniff,
I do it in a handkerchief.”

Interested in reading the whole book? It’s available online. Then take the pledge, like Tom, and become a citizen of the Land of Health yourself!

To celebrate National Poetry Month, we are sharing poems from our collection throughout April. 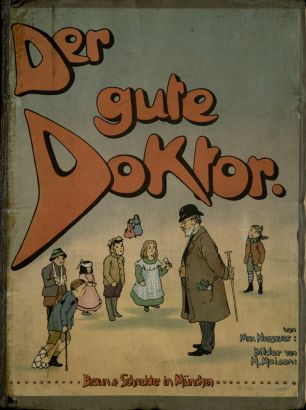 This week, we’re celebrating national poetry month with some medical children’s verse. Der Gute Doktor:ein Nützlich Bilderbuch für Kinder und Eltern (The Good Doctor: a Useful Picture Book for Children and Parents) is a colorful children’s book written by Max Nassauer, a German gynecologist and writer.1  The first edition was published in 1905; our copy is the 9th edition, probably printed in 1926.

The book contains fourteen cautionary tales with medical morals. While the stories, and especially the illustrations, are amusing, they certainly aren’t lighthearted. The consequences of poor health habits are unpleasant. One boy falls ill after walking through the rain and snow. Another gives himself a painful stomachache because he is too embarrassed to use the bathroom at school. Sometimes the repercussions for ignoring the doctor’s orders are far more tragic. In one tale, a stubborn young man refuses the doctor’s medicine and dies the next day.

I found little information on the history of medically-themed children’s tales, but Der Gute Doktor falls into the larger tradition of didacticism in children’s literature. Grimm’s Fairy Tales, translated from oral stories between 1812 and 1857, include cautionary tales, such as Little Red Riding Hood.2 Der Gute Doktor especially brings to mind another children’s book written by a German doctor, Struwwelpeter by Dr. Heinrich Hoffman, published 60 years earlier.2 Struwwelpeter includes similar tales of unruly children suffering for their bad behavior. The tale of Augustus, a boy who refuses to eat his soup and starves to death, would easily fit among the tales of Der Gute Doktor.3 Struwwelpeter was hugely popular and is one of the most well-known German children’s books.2 Undoubtedly, Nassauer was familiar with and influenced by this iconic book.

Here are a few more lessons from the good doctor (translating credit and my thanks go to Mascha Artz):

On the tree
Grows the plum.
In the arcade
hangs the grape,
Apples, pears of all kinds,
cherries grow in the garden.
Oh, how fruit is healthy!
Makes the cheeks red and round.

But there has been Franz,
Who has picked up all,
That was unripe and green.
Well, how bellyache catches him!
Plums, grapes he must snack on,
Without rinsing them.
Dirt and dust he partakes,
Until of cramps he suffered.
But what was the worst:
He cursed the pips in fact!

One time there was a big bawling,
That the mother comes running.
There laid Franz on the ground
And was like dead.

The doctor came, took a tube,
Sticks it into Franz’s tummy
And takes like this, horror of horrors,
Twelve cherry pips out.
If the doctor was not there,
Franz would be living nevermore.
The belly would have burst,
his disobedient tongue

Hans, who teased the animals 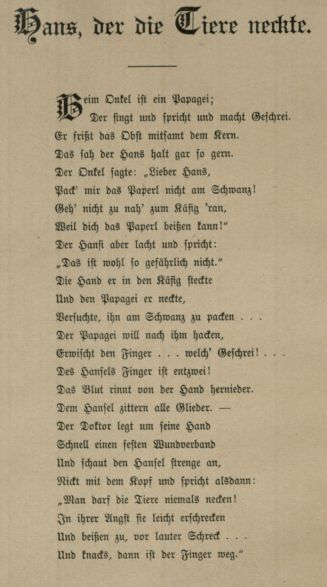 At uncle’s place there is a parrot;
who sings and talks and screeches.
It eats the fruit along with the pip.
Hans liked to watch this.
The uncle said: “Dear Hans,
Don’t touch the parrot by its tail!
Don’t go to close to the cage,
because the parrot can bite you!”
But Hans laughs and says:
“This cannot be that dangerous.”
His hand he put into the cage
and teased the parrot,
tried to grab it by the tail…
The parrot wants to hack him,
catches the finger… what crying!…
Hans’ finger is in pieces!
Blood runs down from his hand.
Hans’ limbs are shaking. –
The doctor put around his hand
Quickly a wound dressing
And gives Hans a severe look,
Nods his head and says:
“One mustn’t tease the animals!
In their fear they easily get frightened
And bite, with shock…
And crack, then the finger is gone.”

Anna who wouldn’t brush her teeth 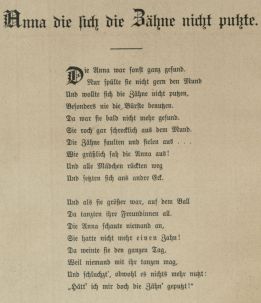 Anna was perfectly healthy.
But she did not like rinsing her mouth
and she did not want to brush her teeth,
especially not using a tooth brush.
And soon she was not healthy any longer.
She smelled awful from her mouth.
The teeth rot and fell out…
How horrible Anna looked!
And all girls moved away from her
And sat down at the other corner.

And when she was older at a ball
all of her girl friends were dancing.
And nobody looked at Anna,
She did not have a single tooth left!
So she cried all day,
because nobody wanted to dance with her,
And sobs, although it doesn’t help now:
“Had I only brushed my teeth!” 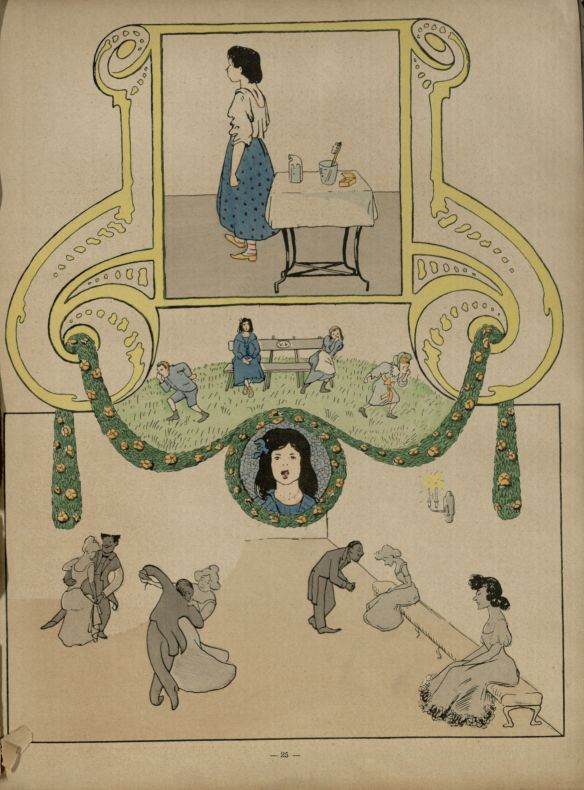 Anna who wouldn’t brush her teeth. Click to enlarge.

Harry A. Wilmer (1916-2005) was a well-known psychiatrist, writer, Jungian analyst, and founder of the Institute for the Humanities at Salado (you can learn more about his achievements at the Salado Institute website). Among his publications—most written or edited with professional psychiatrists in mind—are three health information books for children: The Lives and Loves of Huber the Tuber, Corky the Killer: A Story of Syphilis, and The Mind: First Steps.

In Huber the Tuber, Wilmer gives life to the tiny tubercle bacillus, Huber, and his friends as they embark on the invasion of Lungland. A 1943 book review by Sally Lucas Jean describes the book as “A riotously gay tale of a tuberculosis bacillus and his friends. The entire gang is so personalized as to become real creatures battling against Monosights.”1 The Monosights are the good guys in the story, trying to subdue the tubercle from invading their land (in biology, monocytes are white blood cells that react to infections).

In Corky the Killer, “an articulate microbe of the Treponema pallidum tribe describes what goes on from the start of a syphilitic infection and what may happen if proper treatment is not given.”2 Corky and friends invade the body using the Whirling Dervish Dance of the Spirochetes (a type of bacteria) to spiral through the skin and invade the blood. 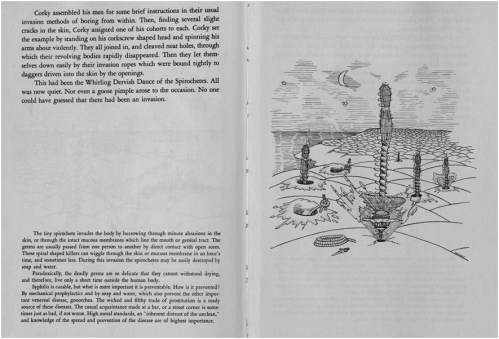 The Whirling Dervish Dance of the Spirochetes. Click to Enlarge.

These two books are great examples of how public health concerns can be brought to public attention in new and dramatic ways in order to curb the spread of disease. Hidden Treasure: The National Library of Medicine devotes a chapter to them, describing them as having “a bit of magic in them: the health message is subordinated to the sheer joy of visual storytelling.”3 This joyful storytelling can be seen in a YouTube video of a young girl reading Huber the Tuber.

“The Author’s Imaginative Model of the Inside World of the Mind.” Click to enlarge.

In The Mind, Wilmer describes perception, emotion, action, and all the functions of the mind in between through the example of a fire engine. When you see a fire engine you perceive a red moving object. Then you classify that image as a warning signal. Anxiety begins to rise and you prepare for fight or flight. Your conscious mind and your conscience work together with your unconscious mind to determine your thought process. Because you have experience with what a fire engine means you know there may be a fire happening somewhere and you determine how it may affect you. A 1965 book review says “All in all, a charming book with unusual ideas.”4

These books remain excellent examples of how an author can present seemingly dense scientific information through illustrations and comic relief.