This is part two of a guest post written by Anna Weerasinghe, a graduate of Harvard Divinity School studying the history and theology of Hansen’s disease. Read part one and part three.

Our last post saw Protestants Robert Louis Stevenson and the Rev. Dr. Hyde in a pitched, public battle for religious missionary Father Damien’s reputation. But what did fellow Catholics think of Damien?

“Good man of religion, good priest,” wrote Father Fouesnel, the vice-provincial of the mission at Honolulu, “but…sometimes indiscreet zeal leads him to say, to write, and even to do things which ecclesiastical authority can only criticize.”1 Damien was constantly at loggerheads with his superiors Fouesnel and Hermann Koeckemann, bishop of the Congregation of the Sacred Hearts on Hawaii, throughout his time at the Molokai leper settlement, and this is was nothing new.

Damien, born Jozef de Veuster on January 3, 1840 to a farming family in Tremelo, Belgium, was driven, strong, and competitive from a young age. He followed his elder brother Auguste into the Congregation of the Sacred Hearts of Jesus and Mary in 1860 and quickly strove to surpass him. When Auguste fell ill and was unable to make the trip to Hawaii to begin his mission, Damien literally jumped at the chance to take his place. He even went over the head of his direct superior by writing a letter to the father-general of the Congregation, much to his superior’s annoyance. By October 1863, he was onboard a ship destined for Hawaii. He was only 23 years old and had yet to be ordained.2 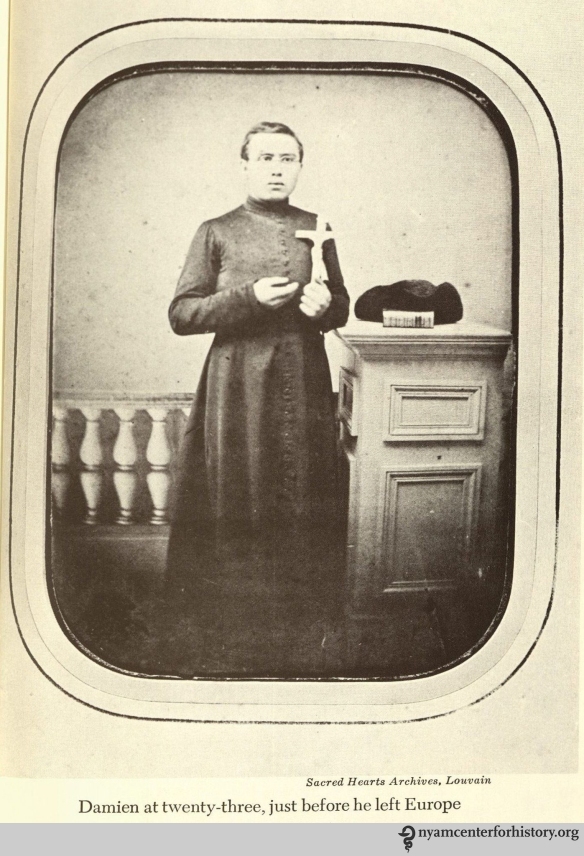 Damien at twenty-three, just before he left Europe. In Daws, Holy man: Father Damien of Molokai, 1973.

This first step towards Molokai set the tone for Damien’s often-fraught relationship with his superiors throughout his life. Damien was impolitic, demanding, and at times even imperious. He did not request supplies or aid, he demanded them; when he got the desired materials or money, he used them as he saw fit without waiting for approval. His intentions were generally good: for example, Damien once took lumber intended for the chapel in Pelekunu, a town on the other side of Molokai, to perform much-needed repairs on the chapel at the leper settlement instead.

But the biggest bone of contention was Damien’s extraordinary international media presence, particularly towards the close of the 1880s when Damien’s terminal Hansen’s disease diagnosis had been confirmed and publicized. This massive surge in popularity was accompanied by an equally vast outpouring in donations, directed not towards the Congregation’s mission, but to Damien himself.

“I see with displeasure,” wrote Bishop Koeckemann in early 1887, “that the newspapers which admire you exaggerate and put things in a false light, without taking account of what the government and others do—the mission also has its share.” Koeckemann and Fouesnel were convinced that Damien was fanning the flames of publicity, writing “to the four winds” about the miserable state of the leper settlement and insinuating that the mission and the government were shirking their duties.3

Damien was taken aback by his superior’s disapproval as much as by the media attention. He believed his actions to be encouraging charity, not publicity—and in fact, only a few letters by Damien were published during his life. His circumstances, rather than his words, were what aroused public interest. The press presented Damien as a hero of self-sacrifice: losing first his freedom of movement, then his health, and finally his life.

Still, after Damien’s death, neither Koeckemann nor Fouesnel were interested in pursuing a sainthood for Damien. All agreed that, after the press had labeled Damien a “hero” and “martyr of charity,” everything had been said. “The rest,” Koeckemann concluded, delicately leaving out all mention of Damien’s personal faults, “only complicates matters.” As Koeckemann’s successor, Bishop Gulston Ropert observed, “Even the beginnings of the process of beatification would have to wait until everyone who knew Damien well was dead.”4

Indeed, the process of Damien’s canonization did not begin until 1977, when Pope Paul IV declared him to be venerable (the first step towards full sainthood). It would take another three decades and two posthumous miracles for Damien to be officially recognized as the patron saint of Hansen’s disease patients.5

The feast day chosen for the new Saint Damien was not the day of his death, as is typical for Catholic saints. Instead, Damien is venerated on May 10, the anniversary of his arrival on the island of Molokai—a moment that many regarded as a death sentence far worse than physical death.6 In the final post, we will look at Hansen’s disease on Hawaii, as well as the progression of Damien’s own illness and death.

2. Philibert Tauvel, Rtather Damien: Apostle of the Lepers of Molokai, Priest of the Cognregation of the Sacred Hearts (London: Art and Book Co., 1904), 29-31.

4. Daws, 245-246. Beatification is the second of three formal steps in the process leading towards sainthood.

6.In fact, at the time when Damien left for Molokai, the government of Hawaii was deliberating a law that would declare confirmed Hansen’s disease victim legally dead. Daws, 73.

Today we have part one of a guest post written by Anna Weerasinghe, a graduate of Harvard Divinity School studying the history and theology of Hansen’s disease. Read part two and part three.

“The simple truth is, [Father Damien] was a coarse, dirty man, headstrong, and bigoted. He was not sent to Molokai, but went there without orders; did not stay at the leper settlement (before he became one himself), but circulated freely over the whole island. He had no hand in the reforms and improvement inaugurated, which were the work of our Board of Health…and the leprosy of which he died should be attributed to his vices and carelessness.”1

So wrote the Reverend Doctor Charles Hyde on August 2, 1889, just months after Father Damien’s death. In just a few weeks on May 11, “Father Damien Way” (33rd Street between First and Second Avenues) will join the ranks of the numerous public memorials named in Saint Damien’s honor.2 Based on Hyde’s colorful description, Damien hardly sounds like the kind of man to be sainted for his charitable work in Hawaii among sufferers of Hansen’s disease (better known as leprosy). Nor does Damien seem like the kind of celebrity whose death would ignite a firestorm of controversy, culminating in a pitched battle of wits between the Reverend Doctor Hyde and world-renowned author Robert Louis Stevenson that would help catapult its subject to enduring international fame.

So just who was Father Damien? A saint or a sinner? A hero or a victim? In this series of blog posts, we will get to know the many sides of Father Damien—the man, the saint, the Hansen’s disease victim—and the divisive forces that shaped his life and legacy.

When Father Damien first arrived at the Kalawao leper settlement on the isolated Hawaiian island of Molokai in 1873, he caught the attention of the press almost immediately. As the first western religious missionary, Catholic or Protestant, to live within the leper settlement despite being free of the disease himself, Damien was something of a sensation. He was praised for his Catholic sense of self-sacrifice and even dubbed a “martyr,” particularly towards the end of his life when it became clear that he had contracted a severe and ultimately fatal form of Hansen’s disease.3

“The priest of Kalawao, with some children of the settlement.” In Daws, Holy man: Father Damien of Molokai, 1973.

So while the Reverend Doctor Hyde only met Damien once during a brief visit to Kalawao in 1885, he had already heard far too much about the priest’s saintliness for his taste. Philanthropic efforts to segregate and support those afflicted with Hansen’s disease in Hawaii were largely funded by wealthy Protestant businessmen and politicians from the United States with a view to future American annexation of the islands. Hyde, an able administrator of these charitable funds, felt that Damien was taking advantage of Protestant charity. “Others have done much for the lepers, our own ministers, the government physicians, and so forth,” Hyde complained. “But never with the Catholic idea of meriting eternal life.”4

Halfway across the world in Sydney, Robert Louis Stevenson read Hyde’s criticism of Damien with mounting rage. Fresh from the success of his best-selling novel Dr. Jekyll and Mr. Hyde, Stevenson wasted no time in raising his pen against the Reverend Doctor: “With you,” he wrote with a certain viciousness, “I rejoice to feel the button off the foil and to plunge home.”5 In February of 1890, he printed his own “Open Letter to the Reverend Doctor Hyde of Honolulu,” a thirty-page rebuttal ripping apart Hyde’s short complaint.

Cover of Stevenson, Father Damien: An Open Letter to the Rev. Dr. Hyde of Honolulu, 1909.

Unlike Hyde, Stevenson had never met Damien personally. But he was a fellow invalid, terminally ill with tuberculosis, and felt a close affinity for the priest and his country despite their religious differences. Stevenson had travelled to Hawaii for his health in the summer of 1889 and visited the island of Molokai just after Damien’s death. Interviewing both Damien’s compatriots and Protestant critics, he found they “build up the image of a man, with all his weaknesses, essentially heroic, and alive with rugged honesty, generosity, and mirth.”6 Was he coarse? Dirty? Headstrong? Even bigoted? Stevenson admitted he probably was, but asserted that these faults didn’t diminish his bravery or achievements. To Stevenson, Damien’s failings simply made him a human, rather than superhuman, hero.

The response was immediate. Hawaiian newspapers were flooded with responses to Stevenson’s letter ranging from gleeful to indignant. Headlines bloomed across the United States, from San Francisco to Omaha to New York. “Damien Defended!” declared the Omaha Daily Bee. “A Reverend Gossip Rebuked,” taunted The New York Times.7 Hyde didn’t stand much of a chance in this battle of the printed word. Stevenson’s impassioned defense of Damien triggered an outpouring of charity from around the world dedicated to the deceased Damien’s cause. Hyde never backed down from his position, but he retreated from public view. “I leave it to any candid mind to judge which side lies the calumny and slander,” the beleaguered Hyde concluded. “There let it lie.”8

Damien’s greatest public critic and most famous defender have had their say, but the man himself remains a mystery Next time, we’ll hear more from those who knew the best and worst of Damien personally—his religious superiors.