Today’s guest post is written by Ann-Sophie Barwich, Ph.D., scholar in the Presidential Scholars in Society and Neuroscience program at the Center for Science and Society, Columbia University. Her work is on current and past developments in olfactory research (1600 to today). On Wednesday, April 26, Barwich will give her talk, “Scent Track: What can the History of Olfaction tell us about Theorizing in the Life Sciences?” To read more about this lecture and to register, go HERE.

Scientific interest in the senses has always been preoccupied with vision and its underlying mechanisms. In comparison, smell is one our least understood senses. This may sound surprising given the importance of smell in flavor perception. Human cuisine represents one of the most central elements of human culture. While the cultural history of scent has gathered sufficient attraction in the humanities and social sciences, its scientific history has yet to be told.

Many of the central research questions about the characteristics of olfaction remain unresolved even to date. How do we classify smells? How many smells are there, and is there such a thing as olfactory primaries? Modern research on smell was revolutionized with the discovery of the olfactory receptors by Linda Buck and Richard Axel in 1991. Their discovery presented the key causal entity to model the molecular basis of smell and granted them the 2004 Nobel Prize in Physiology of Medicine. Since then, olfaction started to emerge as a modern model system in neuroscience.

Nonetheless, records of scientific theorizing about the material basis of odor reach much further back. These hidden experimental records of research on smell offer us an intriguing, yet untold, history of creativity in scientific reasoning. For large parts of the history of science, scientific approaches to smell were faced with its apparent lack of testability. An inherent difficulty for odor description and classification is that sense of smell is incredibly hard to study in a controlled setting. How do you visualize and materialize odor to turn it into an object of objective measurement and comparison? In reply to these questions, several answers were developed from various disciplinary perspectives throughout the past centuries. These ideas present a hidden heuristic source for widening our theoretical understanding of smell even today.

Linnaeus’ classification of odors in medicinal plants in his Clavis Medicinae (1766).

My talk reconstructs a conceptual history of materiality that has informed scientific approaches to smell, and I analyze this material history of olfaction by three stages. First, smells are investigated as “objects in nature,” drawing on 18th-century expertise in botany and horticulture that arranged odors according to their diverse plant origins. Botanical classifications, such as in Linnaeus’ Odores Medicamentorum (1752) and Clavis Medicinae (1766), conceptualized odors as objects in nature. Here, the affective nature of smell was investigated with regard to the medicinal powers of plants. Meanwhile, perfumers have always experimented with odorous plant substances but their knowledge was a well-kept secret. Some records, such as George William Septimus Piesse’s The Art of Perfumery (1857), illustrate that these practices addressed the various possibilities for the material manipulation of odorous substances (e.g., through mechanical force, solvent extraction, distillation). They further conceptualized the psychological effects of odor by analogy with other sensory qualities such as taste, color, and sound. Can we blend odors like colors? Can we understand the harmony between odor notes in parallel with musical chords? 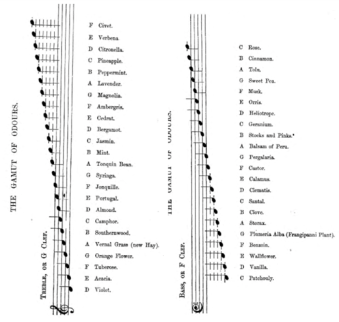 Analogy of odors with sounds to define harmonic chords in perfumery. Source: Piesse 1857, The Art of Perfumery.

Second, smells are framed as “objects of production” in light of the industrialization of perfumery after the rise of synthetic chemistry at the end of the 19th-century. In earlier chemistry, smells were modeled as immaterial spirits that represented vital forces, such as in the Spiritus Rector theory by Herman Boerhaave. This theory was soon abandoned by a more mechanistic causal understanding of odorous particles, especially after Antoine-François de Fourcroy’s extraction of urea as the ‘smelling principle’ of horse urine. This discovery of the chemical basis of odors and its subsequent exploration with the rise of synthetic chemistry presented a fundamental conceptual liberation of smells from their plant origins. New scents, sometimes even unknown in nature, were now produced in the laboratory.

Vanillin was first synthesized by Ferdinand Tiemann and Wilhelm Haarmann in 1874. It’s synthesis, illustrated above, was further refined by Karl Reimer in 1874. Source: Wikipedia (Yikrazuul).

Third, the introduction of molecular visualization and computational techniques in the 20th century abstracted smells further from their natural origins, and this advancement laid the foundation for smells to turn into what Hans-Jörg Rheinberger calls “epistemic objects.” This transformation signifies the integration of smell into the growing scientific domain of biochemical science. Confronted with the sheer diversity of chemical structures responsible for odor qualities, the classification of smells now required the integration of two seemingly separate data sets: a stimulus classification of chemical similarity on the one hand and an ordering of perceptual classes on the other. In this context, the food scientist John Amoore proposed a classification of five to seven primary odors in the 1960s and 1970s.

While this classificatory strategy was soon rendered too simplistic, it provides one of the earliest expressions of a central question in modern olfactory research: How does the chemical basis of odors relate to their perceptual quality? Can we predict smells from the molecular structure of their stimuli? Notably, this question remains open but of central scientific interest today.

Join us on Wednesday, April 26 to learn more about this topic. To RSVP to this free lecture, click HERE.