In the November 1915 issue of The American Magazine, the “Interesting People” section profiled an unusual physician. The article described Dr. William Edmund Aughinbaugh (1871–1940) as being “round like the earth; and he has rolled around it often. He has sawed bones and prescribed pills in every degree of latitude on both hemispheres.”1

As the article, and his autobiography, I Swear by Apollo, make clear, Aughinbaugh lived a life of adventure, traveling the globe for decades. Cuba, Venezuela, India, Peru, and Mexico were all early destinations where he treated lepers, studied the plague, and set up hospitals. He was a founder or early member of the Explorers, Adventurers, and Circumnavigators Clubs; taught courses about foreign trade at New York University and Columbia; and spent many years writing about and helping negotiate foreign trade agreements in Latin American countries and for South American natural resources.

The Academy’s manuscript collections contain a small album of photographs donated by the New York Public Library in 1952 (NYPL began sending items of medical interest that were given to them to the Academy in 1900). NYPL has a small collection of Aughinbaugh’s papers, mostly related to his work as the foreign editor of the New York Commercial. Aughinbaugh probably assembled the album between 1897 and 1906. Most of the photographs are unlabeled and trying to contextualize them has presented interesting challenges, demonstrating both the ways in which the written record helps us uncover more information and how much will probably remain forever unknowable.

It’s pretty clear that the first couple of photographs date to around 1895–97, when Aughinbaugh was a medical student at Columbian University (now George Washington) in Washington, D.C., and then an intern at Emergency Hospital there. 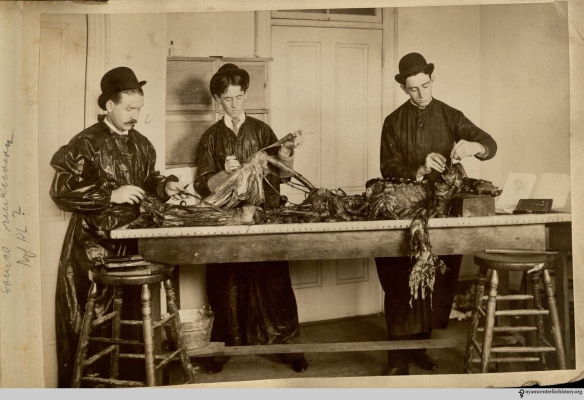 As both Aughinbaugh’s autobiography and his New York Times obituary attest, he helped finance his medical education by founding, with several other students, the Hippocratic Exhumation Corporation, essentially a grave-robbing operation. Aughinbaugh justified the less than savory labors of the corporation by assuring his readers that “care was always taken to undress the corpse and return the clothing to the grave…” as, according to court decree “a naked body belonged to no one—no crime would be committed by taking it.”2

Aughinbaugh insisted that he and his friends were not alone in this enterprise. Most medical students were desperate for bodies to dissect, and few legitimate ways to procure them existed. John Harley Warner and James Edmonson, in their recent book, Dissection: Photographs of a Rite of Passage in American Medicine: 1880-1930, corroborate this assertion, noting that in Washington, D.C., as well as in many states, there were no legal ways of obtaining bodies at that time, even though students were required to complete dissections to graduate. These two photographs, of Aughinbaugh (on the left) and two other students dissecting a body, and of Aughinbaugh and a fellow physician with a skeleton companion, fit right into the tradition of medical students posing with their cadavers in dissecting rooms.3

The album also contains posed portraits of patients suffering from diseases or showing the results of surgical operations. In some cases, Aughinbaugh pasted multiple photographs of the same patient into the scrapbook. The album dates from a time that witnessed the expanded use of photographs to document treatments and disease. While there is no way to be certain, these photographs may have been taken by Aughinbaugh himself.

Another group of pictures shows groups of people that include Aughinbaugh himself (here in a white coat and hat). These images must date to Aughinbaugh’s years in Cuba. Having been denied the opportunity to enlist during the Spanish-American War in 1898 because of a heart condition, Aughinbaugh signed on as the ship’s surgeon for a vessel ferrying sick and wounded soldiers between Cuba and the United States. After the signing of the Treaty of Paris, he jumped ship while the boat was docked in Havana and stayed on as a civilian surgeon, working at the largest hospital in Cuba devoted to the care of leprosy patients, which, although he does not name it, must have been the hospital at San Lazaro, on the outskirts of Havana.4

Aughinbaugh’s autobiography provides real documentation for only a single photograph in his album. Aughinbaugh spent about four years (ca. 1902–1906) in India during a bubonic plague epidemic, working for the Indian Plague Commission. The picture shows an Indian ascetic suspended upside down over a fire. “I photographed one man who hung suspended by his feet from a banyan tree, while his youthful assistant built a fire of dried cow dung within a foot of his head,” Aughinbaugh writes, “When he was lowered, I… could not detect one sign of a burn”.5 He later submitted the photograph to a contest run by the New York Herald, won a prize, and added the clipping to the album. 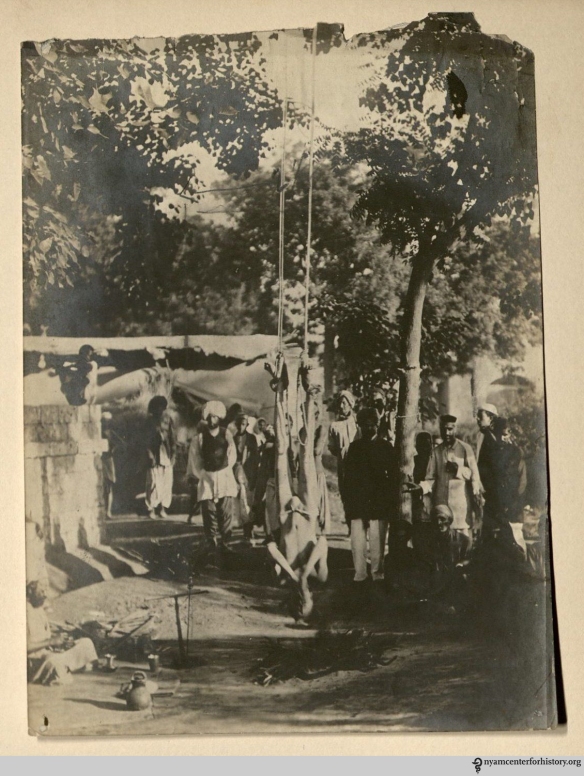 This album raises many questions, both about the use of photography by physicians to record information about medical practice and about the ways in which individuals choose to save images that document their own life experiences. Aughinbaugh’s choice to conflate the personal with the professional is part of what continues to make the album an intriguing part of our collections.

Heidi Knoblauch, the author of today’s guest post, is our 2014–2015 Klemperer Research Fellow. She is a Ph.D. candidate in the History of Science and Medicine Department at Yale University.

Tucked away in the New York Academy of Medicine’s special collections is a small green metal box, simply labeled “daguerreotypes.” The box contains twelve photographs and one painting. A few are images of doctors, but most are of patients.

You would not necessarily know these photographs were of patients unless you looked closely for a misshapen nose, outline of an excision, or nondescript facial scars. The subjects’ posing more closely resembles 19th-century photographic portraits circulated between family members than the poses we currently associate with a clinical image. These poses are accentuated by the fact that most of the photographs are housed in hinged frames with gold matting.

These photographs straddle the line between the medical and the personal that was becoming more defined during the 19th century. They blend intentional subjectivity with a new technology used to make what contemporary physicians described as a “more perfect record.”

During the 19th century, medical men collected photographs of patients and pasted them into personal scrapbooks, case records, and put them on display. These personal collections of notable cases represent not only the use of photographic technologies in consultation, but also the continuation of an engrained practice of collecting that began long before the advent of the daguerreotype. Like all archives and collections, they highlight the inclusion of things meant to be remembered and exclusion of things meant to be forgotten.

Another view of the special collection. Click to enlarge. Photo by Heidi Knoblauch.

Tracking the social practices associated with amassing medical collections is crucial for understanding this small box of photographs, almost all of which lack identifying information. These photographs have the potential to help us sketch out the formation of communities of collecting and exchange during the middle of the 19th century and to think about how doctors interpreted their relationships with their patients.

The famed surgeon Valentine Mott was one of many physicians who collected surgical and pathological specimens—including the images in the small green box. His museum, which was located at the University Medical College, was composed mainly of pathological specimens from surgical operations, collected in part from his students, who submitted dissections through an annual competition. Like many of his contemporaries, Mott thought collecting would advance the surgical art. In 1858, he declared that his collection was “believed to be the largest that any American surgeon had the occasion to form.”

Mott also sought photographs from his students. Although most of the examples in the small box are unmarked, one of Mott’s students, Edward Archelaus Flewellen, labeled a photograph he sent Mott: “A.P Jackson, Thomaston, Georgia. A supposed case of subcutaneous aneurism by anastomosis. Referred to Dr. Mott by E.A. Flewellen.”

In 1856, Flewellen sent a letter with this daguerreotype to his instructor to obtain a consultation for his patient. Flewellen told Mott that he “did this reluctantly” because he was sure that Mott was “taxed by frequent consultation by many of the thousands of students who have had the pleasure and benefits of [his] instruction.” But, Flewellen added, he believed that Mott would find this an interesting and rare case. 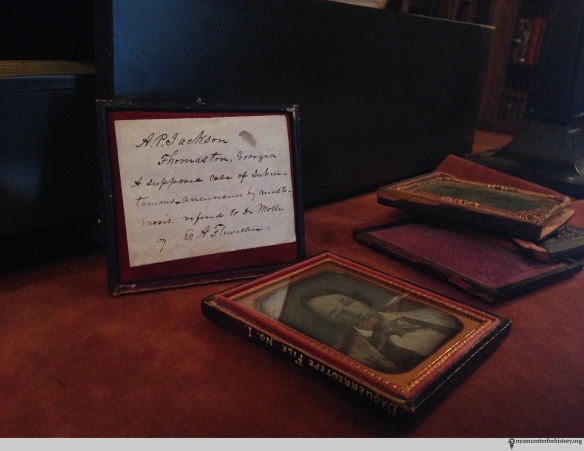 Flewellen’s patient, A.P. Jackson, was a 33-year-old mechanic from Georgia who developed a tumor over his right eye when he was very young. Flewellen described the case in great detail, saying that he had watched the tumor grow for the past five years. Flewellen asked Mott what surgical treatment he would recommend to “rid this poor young man of this hideous deformity” and then promised to send Mott another daguerreotype of Jackson if the surgery was successful so Mott could contrast the before and after photographs. There is no record of Mott replying to Flewellen.

Patient photographs began to represent a new type of scientific aesthetic practice, aligned with graphs and charts, during the 1870s. Patients contributed photographs to their case records during the 19th century, but by the 1890s patients became less willing to actively participate in creating a photographic record of their disease. Today, many patients—especially in genetics, plastic surgery, and dermatology departments—have their photographs taken by a physician or technician (with a digital camera of course) to include in their electronic medical record. Yet employing a professional photographer to take a photograph with the express purpose of mailing it to a physician would seem odd to most people today.

Concerns about privacy surfaced at the end of the 19th century, which changed the way patients thought about photography in the clinic. Standards for clinical photography emerged during the 1920s and, because of this, we would find it strange to have a clinical photograph taken with a piece of bone or a bullet. Photographs are now more sterilized than they were in the 19th century and, unlike in the case of Flewellen, patients are rarely told to dress up before being photographed. The culture of photography has changed and, with it, the way physicians use photographs has shifted.