The French army barber-surgeon—and later master surgeon to four French kings and Catherine de Medici—has many accomplishments to his name.1 In 1537, he discovered that dressing gunshot wounds was more effective than the accepted practice of cauterizing them with boiling oil.2 He championed the use of ligatures to control bleeding post-amputation, which became more successful with the gradual adoption of tourniquets. He also developed an early “flap amputation,” saving skin and muscle during surgery.2,3 He authored 25 books with topics ranging from medicine and obstetrics to natural history and demonology (we hold many editions of his works).2 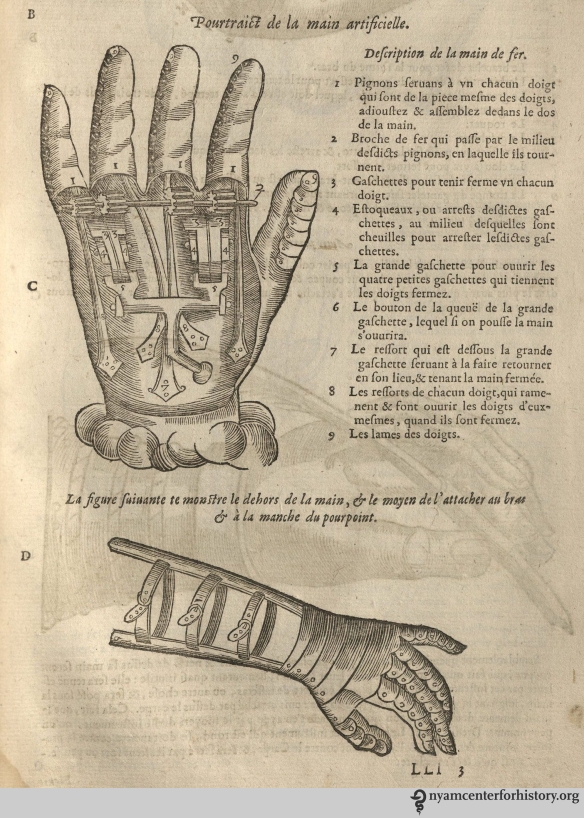 Artificial arm in use. From our 1633 edition of Les oeuvres d’Ambroise Paré. 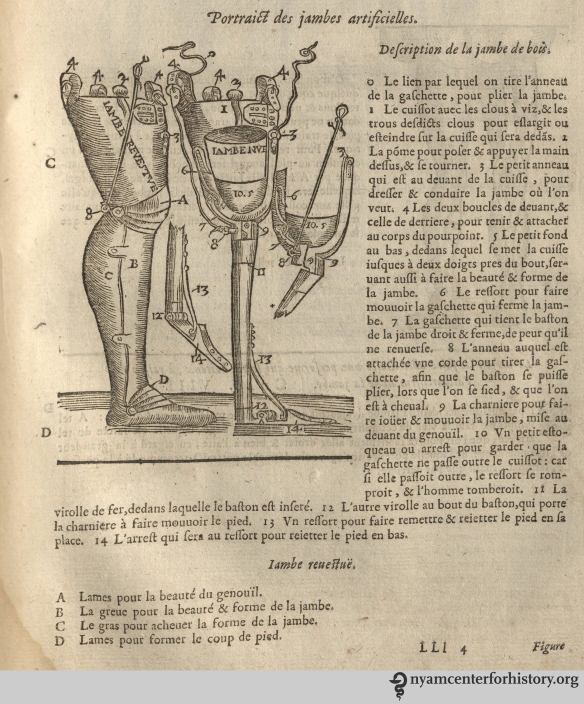 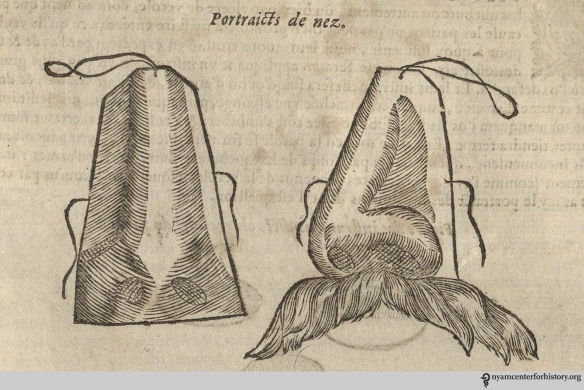 Artificial noses. From our 1633 edition of Les oeuvres d’Ambroise Paré.

To celebrate Paré and his contribution to the field, we are featuring images of prosthetic devices throughout the centuries from items in our collection. 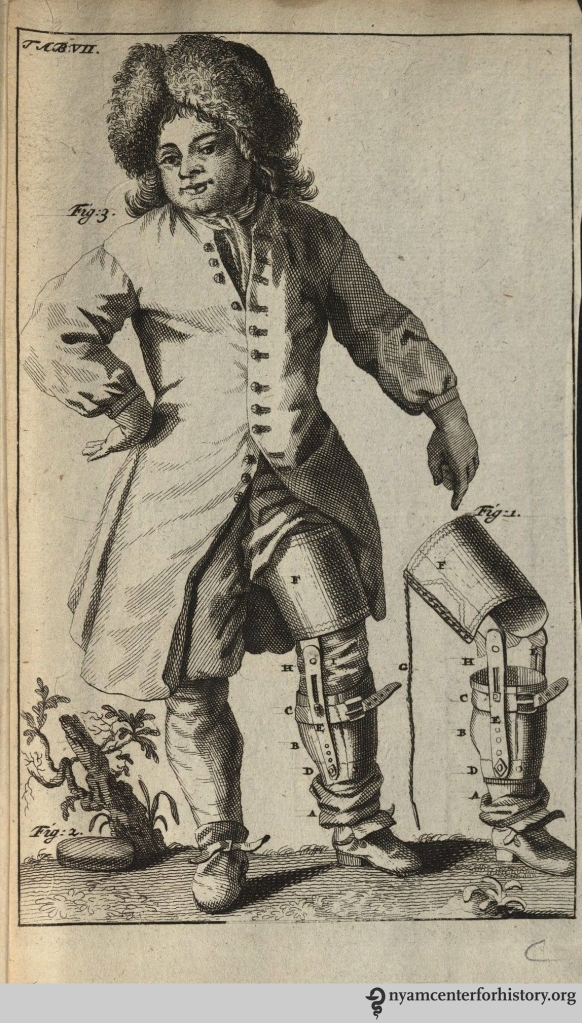 In 1718, French surgeon Jean-Louis Petit (1674–1750) developed an effective tourniquet, allowing for more successful control of bleeding during and after amputation.3 He wrote about his achievement in Traité des maladies chirurgicales, et des opérations qui leur conviennent. 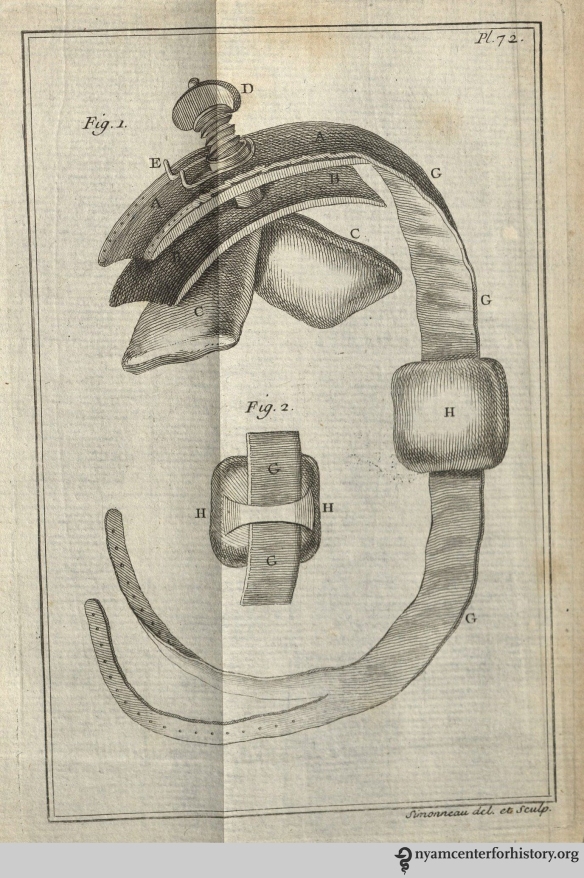 Douglas Bly’s new and important invention, advertised in pamphlets from 1859 and 1862, offered a “ball and socket ankle, which were made of an ivory ball resting within a rubber socket,” and allowed for increased mobility.4 Bly publicized his leg throughout the Civil War, but the U.S. government found it too expensive to provide to wounded soldiers. Instead, the government offered to pay the difference between a government-issued limb and Bly’s higher-end model.4 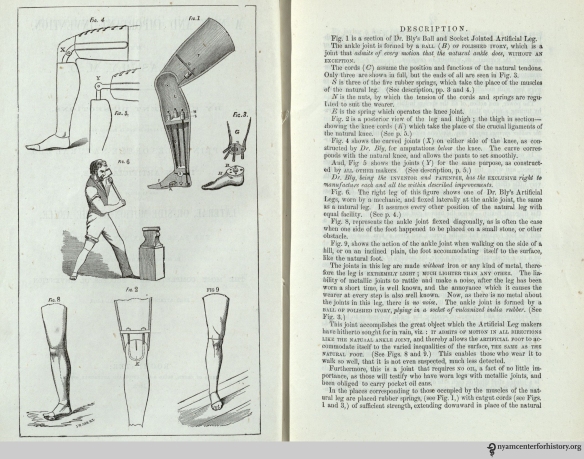 Pages one and two of Douglas Bly’s “A New and Important Invention,” 1862. Click to enlarge. 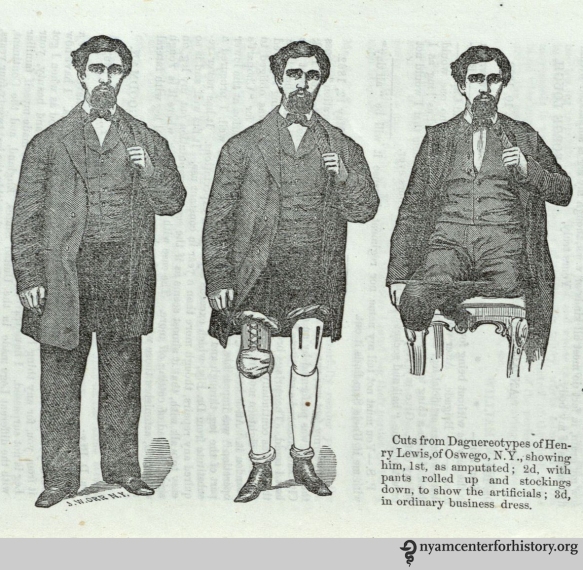 Amputated, in stockings, and pants rolled up to show the artificials. In Douglas Bly,  “A New and Important Invention,” 1862, p. 24. Click to enlarge.

Henry Heather Bigg published Artificial Limbs and Amputations in London in 1885, almost exactly thirty years after the Crimean War (1853–1856). Our library holds the 1889 edition. Bigg illustrates advances he witnessed at the Royal Hospital at Netley. 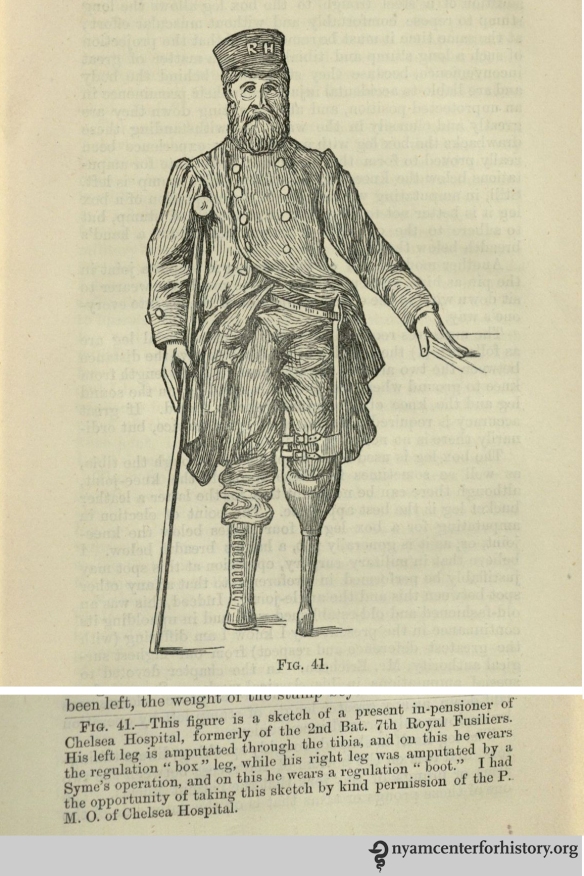 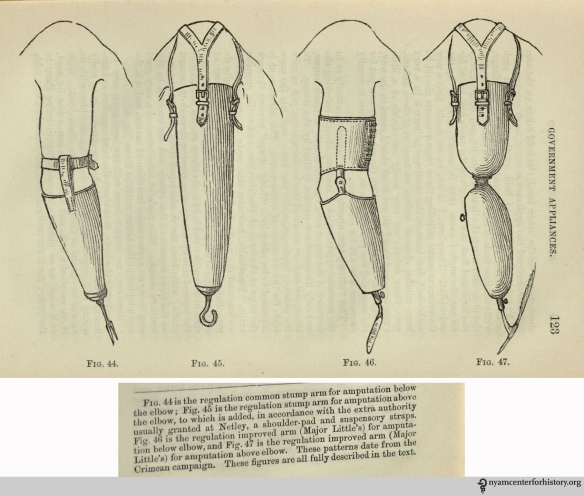 The A. A. Marks Company of New York regularly released A Manual of Artificial Limbs—our library holds seven editions, published from 1906 to 1926. There are only slight variations in the volumes, most notably the mention of services for Great War veterans in the later editions. The manuals aim to convince customers of the value of the devices throughout a person’s daily tasks and career (even when performing a magic show). 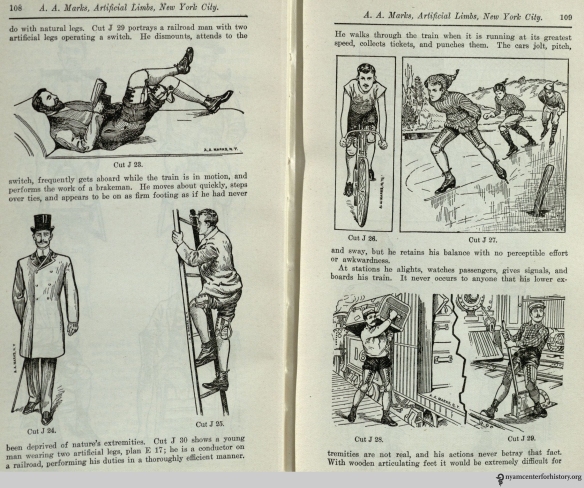 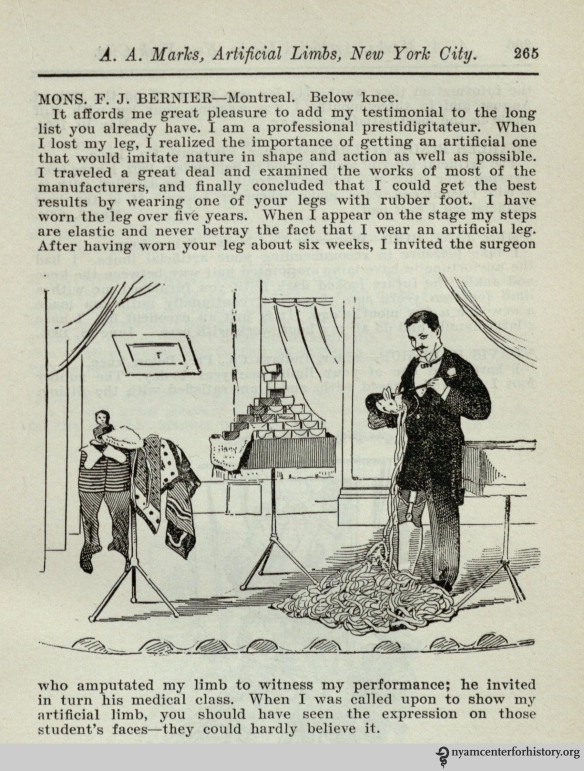 Atha Thomas, associate professor of orthopedic surgery at the University of Chicago School of Medicine, and Chester C. Haddan, president of the Association of Limb Manufacturers of America, co-wrote Amputation Prosthesis, published in 1945 and heavily influenced by both world wars. They conclude their first chapter: “Where amputations were once considered only as a life-saving measure they are now performed yearly by the hundreds in a deliberate attempt to substitute a useful prosthesis for a useless, unsightly, or hopelessly deformed extremity” (12). 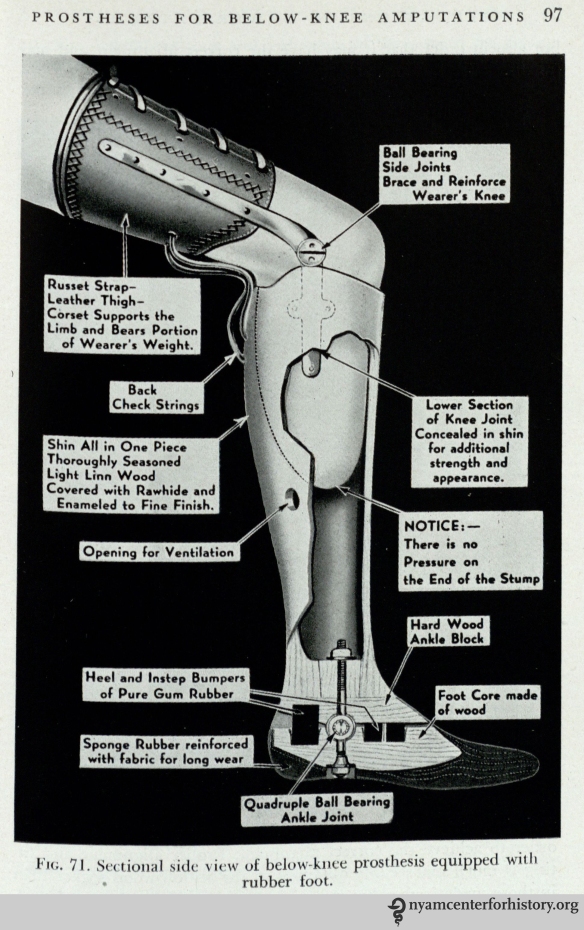 “Great dexterity is possible also with this type of mechanical hand.” In Thomas & Haddan, Amputation Prosthesis, 1945, p. 212-213. Click to enlarge.

In 1945 the U.S. National Research Council established the Committee on Prosthetic Devices, later called the Advisory Committee on Artificial Limbs. The Committee published Human Limbs and their Substitutes in 1954, describing such progress as the electric arm, new methods of knee stabilization, and advances in suction sockets. 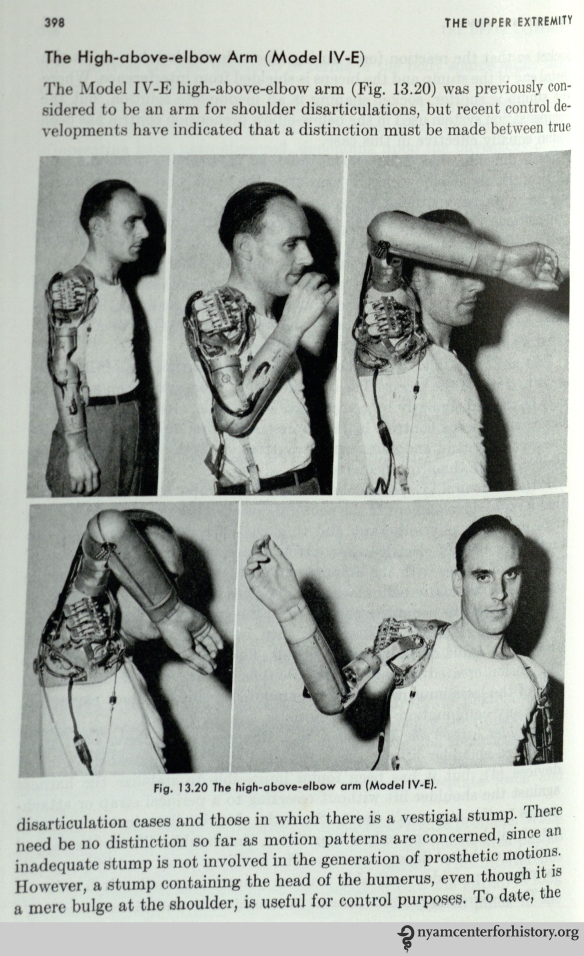 An electric arm. In National Research Council, Human Limbs and their Substitutes, 1954, p. 398. 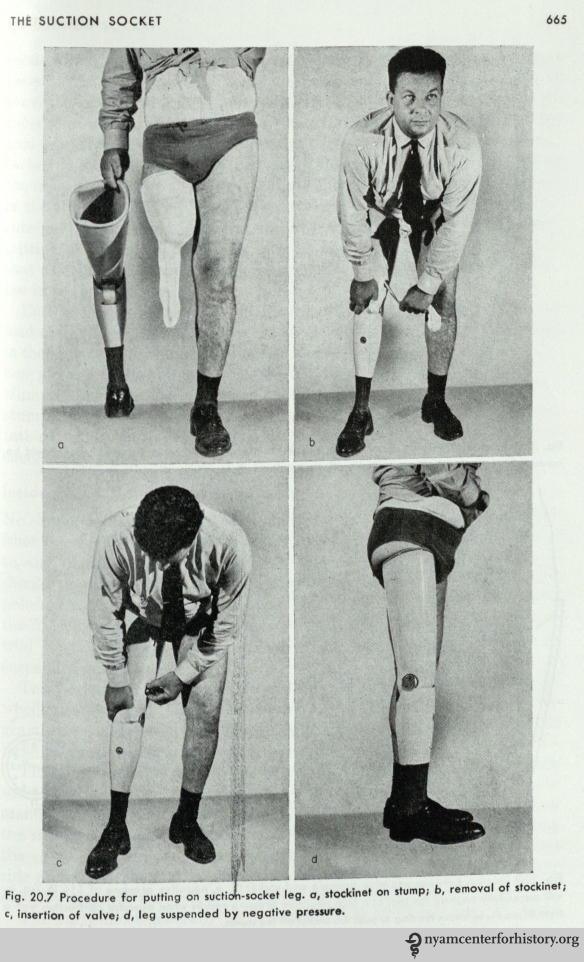 In Upper and Lower Limb Prostheses (1962), author William A. Tosberg includes a brief history of the materials used in prostheses: after WWII, plastics predominated. The post-WWII era also lead to professional certifications and education programs for prosthetists (no longer called “limbmakers,” as they are by Thomas and Haddan) and orthotists. 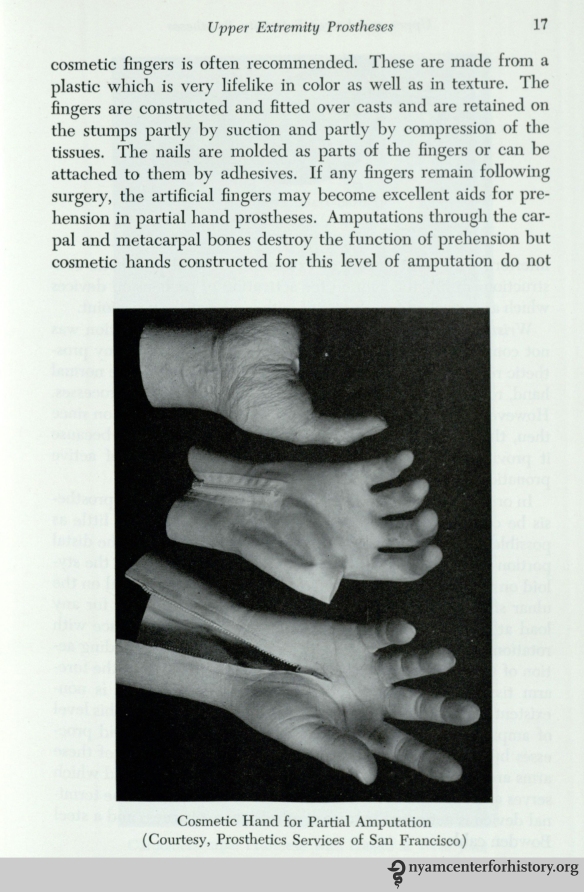 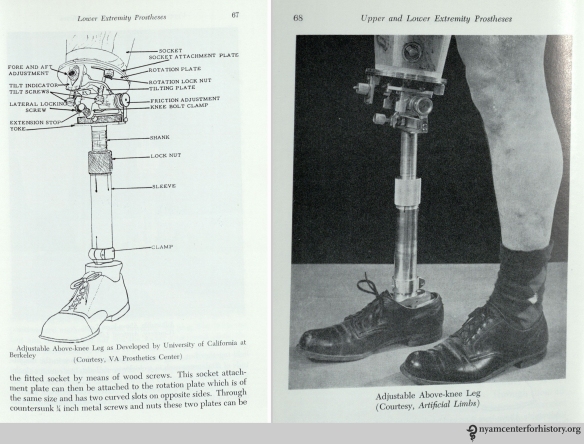