This post is one of a series from participants in the Innovation in Digital Publishing in the Humanities session at the American Historical Association 2015 Annual Meeting in New York, co-presented by the Wellcome Trust and The New York Academy of Medicine’s Center for the History of Medicine and Public Health.

Experimentation
By Martin Eve, Lecturer in English Literature at the University of Lincoln and Open Library of Humanities

It is always impossible to single out the single biggest opportunity or challenge in any field. Benefits or difficulties depend upon who you are and how you look at them. For instance, for some large, existing publishers, the biggest challenge for innovation is how they can adapt their business models to allow free access to academic material, while still paying their staff. Conversely, for some publishers, this new potential publishing-as-service model makes it easier to predict the degree of income in advance. In other words: opportunity and challenge are not universal.

Speaking from my position, the biggest challenge that I perceive for innovation in digital publishing lies in the conservatism of the academy. The university is extremely stuck in its ways and uses publisher brands for its hiring, firing, tenure, and assessment mechanisms. In other words, rather than re-evaluating work when we hire someone, we say “who published it?” and use that as a shorthand. This creates markets for academic publishing in which a limited number of players hold a high level of power. It also means that academics who are dissatisfied with the current offerings from existing publishers often have nowhere else to turn if they are to play the games that will get them jobs and recognition.

In turn, this concentrates the ability and responsibility for innovation into the hands of an ever-decreasing number of publishers, who must balance any acts of innovation against their corporate interests. In other words, the fact that we have “effectively outsourced to journals and publishers the function of assessing academic quality,” as an executive editor for the humanities at Harvard University Press noted in agreement with a former editor of the British Medical Journal, makes innovation and improvement the responsibility of a market-driven publishing industry, rather than an aspect that researchers should consider part of their practice. The economic mess is then only intensified when we consider that learned societies often receive revenue from libraries through subscription revenue from commercial publishers. 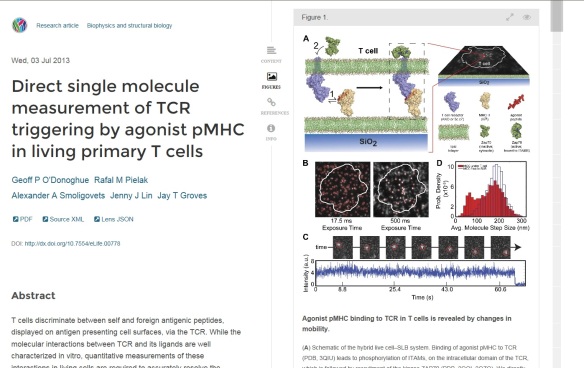 An example of article viewed through the eLife lens platform

More optimistically, this links to my belief that the biggest opportunities for innovation are often the ones that we can’t see as individuals or companies working in isolation. This is one of the reasons why I have been a supporter of open licensing for academic research. We should allow others to exploit the potential in our work that we, ourselves, cannot perceive. A good example of this is eLife’s Lens viewer, which radically re-presents work in ways the original publisher never considered. Instead of surveying “what researchers want,” they built something that they thought would work and could operate on existing content. It’s brilliant. This ties in to the fact that when researchers are asked what innovation they need/want in publishing, they can be unimaginative in their responses for new technology. They know what has worked up until now and they don’t know what they don’t currently have that would improve those practices. Instead, when people are legally free to just “have a go,” good things can happen that would otherwise be impossible.

The end result of such experimentation, to my mind, is that the biggest opportunity for innovation in digital publishing could be a move towards a re-integration of society and the academy. In disseminating academic research freely and openly on the internet and by opening feedback channels to the wider public, it seems clear that the societal benefits of mass higher education, across all disciplines, will be more easily realized. By implementing novel economic strategies to fund widespread access to research, such a mission could be achieved. Longer-term, however, the challenge is to overcome the fear that simply reinforces what already exists within practice. Once economic challenges have been addressed, finding ways to let others experiment with work seems key so that instead of all working within echo chambers that amplify the present, we cooperatively experiment to find a better future.