This guest post is by Matthew Davidson, a doctoral candidate at the University of Miami and the 2019 Paul Klemperer Fellow at the New York Academy of Medicine. His research examines public health in Haiti during the 1915-1934 U.S. occupation.

During the nineteen years of the early twentieth century that the United States occupied Haiti (1915-1934), U.S. officials liked to claim that they had brought modern medical thought to the Caribbean country. Their contention was bunk, but it apparently felt very real when the Haitian physician, Dr. François Dalencour, received a letter from a French colleague asking for copies of any Haitian medical publications. “I was ashamed,” Dalencour later wrote, “of being obliged to tell the truth, to say that there were none. [i] He would have been able to send along reports authored by the occupation medical service, but there was apparently nothing current otherwise. Haiti, Dalencour decided, needed a medical journal.

Soon after, he established one. 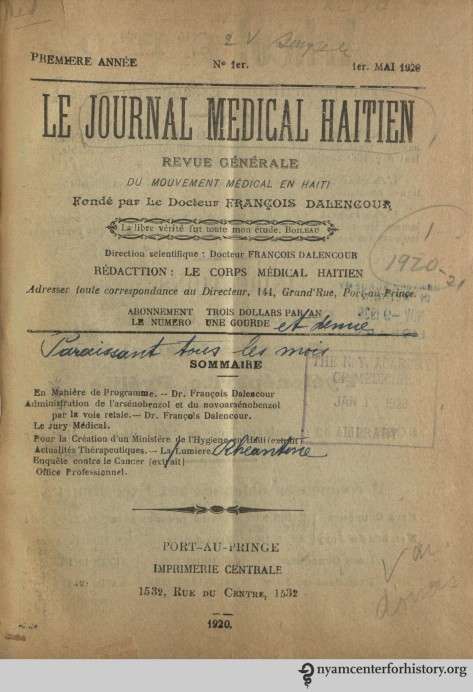 The occupation, it turns out, was indeed an important period for Haitian medical thought. As was the case in other fields, it provoked a flurry of intellectual production. Consequently, whereas doctors such as Dalencour lamented the lack of Haitian medical publications at the start, by the end the local medical establishment could boast of several. U.S. officials claimed this was a sign of how far medicine in Haiti had “progressed” under their tutelage, but it was truly more the product of Haiti’s own medical tradition. [ii] Meant to advance medical practice and public health policy, the journals provided a forum for Haitian practitioners to debate and discuss all sorts of matters related to health and medicine in the country.

Dalencour’s periodical, Le Journal Médical Haïtien, was arguably the most important of the occupation-era publications. Not only was it the first, founded in May 1920, but it also did the most to open up space for the Haitian medical profession to articulate ideas and positions about their field. With U.S. personnel otherwise completely dominating all aspects of medicine and public health in Haiti, Le Journal Médical Haïtien was the only venue (outside of individual private practices) actually controlled by Haitians. It accordingly brought together “all members of the Haitian Medical Corps, without any distinction”: doctors, pharmacists, dentists and midwives. [iii] In doing so, the journal bridged longstanding divisions within the medical corps and laid the foundation for further independent initiative.

As Le Journal Médical Haïtien facilitated the reorganization of the Haitian medical profession, it also laid bare the lie that the occupation brought medical modernity to the country. After all, it was not because the U.S. introduced “scientific medicine” or any other set of ideas to Haiti that the journal appeared. Rather, it had its genesis in the pre-occupation period. As Dalencour wrote in the first issue, the project was first conceived in 1903. He was still a medical student at the time, so establishing a journal for medical reform was a “somewhat pretentious idea.” [iv] Nonetheless, it was then, well before the Americans landed, that the first steps were taken to establish a “general review of the medical movement in Haiti” (as Le Journal Médical Haïtien was later billed). The principles laid out by Dalencour and his collaborators in 1920 were even the same as those declared in 1903. All that had changed was the name. Dalencour had originally chosen the title Haïti Médicale, but – further reflecting the strength of Haiti’s pre-occupation medical and intellectual traditions – another journal had taken that name in 1910. [v]

The next to emerge was Les Annales de Médecine Haïtienne. Established in 1923 by two young doctors, Drs. N. St. Louis and F. Coicou, Les Annales was associated with a newly reorganized union, le Syndicat des Médecins. Much more oppositional in outlook, the journal was conceived as an “organ for the expansion of medicine in Haiti and for the defense of the interests of the medical corps.” [vi] Explicitly anti-occupation, it actively contested the U.S. health project in Haiti and worked to organize Haitian doctors against it under the auspices of le Syndicat des Médecins. It was not merely a political publication, though, for it also carried articles dedicated to public health education and research in the medical sciences. Over time, such articles became more and more prominent, and as the occupation ended Les Annales de Médecine Haïtienne essentially transitioned to purely scientific journal. U.S. medical sciences, however, continued to be received coolly.

The last of the occupation-era publications was the only one that owed its existence to the occupation health project. The Bulletin de la Société de Médecine d’Haïti, founded with that society in 1927, was the sole journal fostered by U.S. officials, and it was the only one to have U.S. practitioners on its editorial board or to publish articles authored by occupation doctors. The society itself was organized and controlled by the occupation health service, the Service d’Hygiène. Accordingly, most independent doctors (i.e., those not directly employed by the Service d’Hygiène) tended to find the Société “too American” and remained outside of it. [vii] Nonetheless, the Bulletin was more than just an American journal based in Haiti. 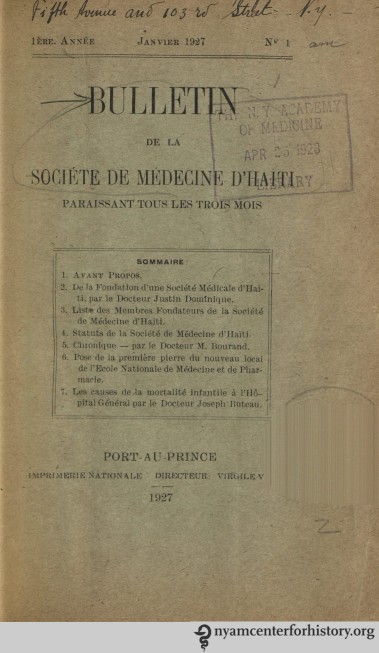 The Bulletin de la Société de Médecine d’Haïti was an important register for the medical sciences in Haiti. From 1927 until the end of the occupation, it published an impressive array of scholarship, much of it by Haitian practitioners. With an emphasis on medical specialization, it tended to be more concerned with the medical sciences than with public health policy or practice, and it accordingly developed a reputation for being the most scientific of the journals. As a project, however, the Bulletin mostly just brought to fruition ideas and proposals first put forth in the pages of Le Journal Médical Haïtien (or by the 1890 Société de Médecine de Port-au-Prince before that). In form as much as in content, then, the Bulletin was as Haitian as it was American. Consequently, when the American editors shuttered the journal in 1934 with the end of the occupation, the Haitian medical establishment remained committed to the project: it lived on as the Bulletin du Service d’Hygiene et d’Assistance Publique – Medicale et Sanitaire.

Each of these journals have largely been overlooked by historians, despite being incredibly rich sources. With their debates about public health policy, research on various health matters, clinical notes, correspondence between doctors and medical officials, translated articles from abroad, social commentary, and more, they offer significant insight into the state of medical care and the politics of health during the occupation. They would also be of interest to anyone thinking about Haitian social and intellectual history more generally. Few copies of each journal still exist, but they – with the exception of Les Annales – can be found at the New York Academy of Medicine library.

The history of the New York Academy of Medicine (NYAM) includes many great figures, including Samuel Smith Purple, a founding Fellow as well as advocate for our Library, author of a large number of medical works, and the ward physician under the Board of Health during the NYC cholera epidemic of 1849 (“Dr. Samuel Smith Purple”, 1900); Valentine Mott, an eminent surgeon who helped to found Rutgers Medical College and was chair of surgery at Columbia College (“Obituary: Death of Dr. Valentine Mott”, 1865); and Abraham Jacobi, a pioneer in pediatrics and President of the Academy from 1885-1889 (Watson, 1896). These doctors all had one thing in common (besides, of course, being physicians): they were all men. Until 1880, there had never been a female NYAM Fellow. The woman who managed to break this glass ceiling? Mary Putnam Jacobi – by one vote (U.S. National Library of Medicine, 2015).

Mary Putnam was born on August 31, 1842, in London. Her parents, who were both Americans, returned to the States in 1847, and settled in New York City. In 1859, she began studying medicine, first receiving a diploma from the New York College of Pharmacy in 1862 (the first woman to do this) and then graduating with her MD from the Woman’s Medical College of Pennsylvania in 1864. In 1866, she traveled to Paris to enroll in the École de Médecine – once again, the first woman to be admitted – and graduated from there in 1871 (Watson, 1896).

Just these accomplishments would have been enough to put Putnam in the history books, but she hadn’t even begun to make her mark. Women’s education at the time was often separate from men’s, and she argued that higher education, particularly medical school, should be co-educational, as women’s medical colleges did not have the same resources as those affiliated with large hospitals. Returning to New York, she organized the Association for the Advancement of the Medical Education of Women and served as its president for almost 30 years (U.S. National Library of Medicine, 2015).

In 1876, Jacobi (now married to Abraham Jacobi) published an important essay: “The Question of Rest for Women during Menstruation”, which won the Boylston Prize at Harvard University (U.S. National Library of Medicine, 2015). Why was that so significant?

Jacobi was a stickler for rigor in scientific research. She believed that many other doctors did not live up to these expectations and allowed their biases to color their research. One of these biases was the widespread belief, specifically argued for in Edward H. Clarke’s Sex in Education; or, a Fair Chance for the Girls, that women who exerted themselves during menstruation could face serious health issues. This belief was used to justify separating women from higher education and certain professions. Relying heavily on statistics and empirical evidence, Jacobi thoroughly debunked this notion (Bittel, 2009).

Jacobi continued her work in fighting for equality for women throughout her lifetime – she wrote in favor of suffrage and taught at the Women’s Medical College of the New York Infirmary for Women and Children until 1889, assisting in elevating educational standards (U.S. National Library of Medicine, 2015).

Jacobi even considered her own life as a means to advance medical research – when diagnosed with a brain tumor, she wrote a paper about it before passing on at the age of 63: “Description of the Early Symptoms of the Meningeal Tumor Compressing the Cerebellum. From Which the Writer Died. Written by Herself” (U. S. National Library of Medicine, 2015).

NYAM’s collection of Mary Putnam Jacobi’s productions can be found in our catalog.

Watson, I. A. (Ed.). (1896). Physicians and surgeons of America: A collection of biographical sketches of the regular medical profession. Concord, NH: Republican Press Association.