By Dr. Paul E. Sampson, Assistant Professor of History, The University of Scranton

2020 Audrey and William H. Helfand Fellow in the History of Medicine and Public Health

Over the course of the past year, I have had the privilege of spending four weeks researching in the spectacular rare book collection of the Library of the New York Academy of Medicine. My book project is entitled “Ventilating the Empire: Environmental Machines in Britain, 1700–1850” and comprises a scientific and social history of ventilation in Britain and the British empire during the long eighteenth century, roughly 1688 to 1815. By examining the design and deployment of ventilating machines in slave and naval ships, prisons and public buildings, I ask how devices designed to protect human beings from environmental hazards became a means of dividing British society along class and racial lines. 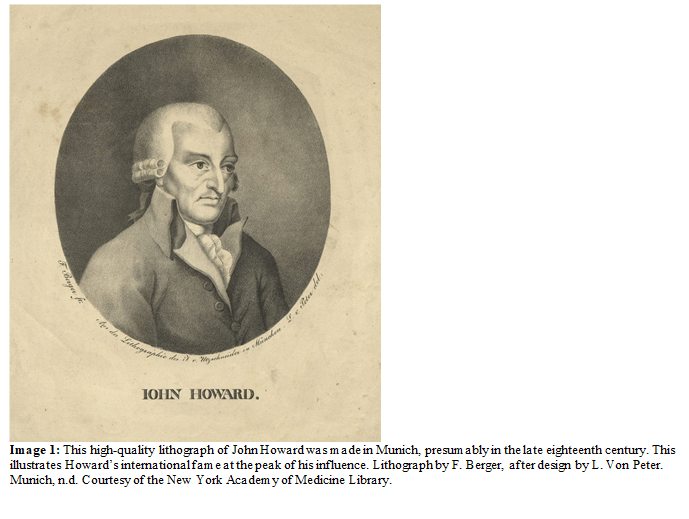 The primary subject of my research has been the life and career of prison reformer John Howard (1726–1790). I examine Howard’s career through the context of his work on “Jail Fever” (AKA typhus) which contemporary physicians and medical experts understood as an airborne disease. I argue that a key feature of Howard’s celebrity was his perceived invulnerability to airborne diseases. In addition, his influence helped to shift the discourse of prison reform away from overall institutional sanitation and towards methods intended to control the hygiene and morality of individual prisoners.

For those unfamiliar, John Howard was a noble-born, intensely religious man who was appointed sheriff of Bedfordshire in 1773. One of his duties was to inspect local prisons. Unlike many of his genteel contemporaries, he took this job seriously. He was appalled by the conditions of the prisons in Bedfordshire, and to spur reform and gather ideas for improvement, he made a series of lengthy tours to visit as many prisons as he could throughout the British Isles and continental Europe. His first published book, The State of the Prisons in England and Wales (1777), detailed his visits to dozens of county jails and bridewells (workhouses), including careful notes of the fees charged to prisoners, their daily workload, the prison diet, and the overall sanitation.

One of the primary goals of Howard’s travels was to find the best means of preventing the spread of disease. By the 1750s, prisons were increasingly perceived as public health hazards. The filthy and diseased condition of prisoners in London’s Newgate prison became a public scandal after the Lord Mayor and 56 others died of jail fever in the weeks following an audience with prisoners. Following the contemporary etiology of fever, the outbreak was attributed to the “putrid effluvia” exhaled in the breath of sick prisoners that had imparted a “poisonous quality” to the air in the courtroom.1 By 1774, Howard had achieved celebrity status by helping to author the “Act for Preserving the Health of Prisoners in Gaol.” This act stated that jail fever was caused by the “want of cleanliness and fresh air” and mandated that all interior walls and ceilings be scraped and white-washed annually and “constantly supplied with fresh air, by means of hand ventilators or otherwise.”2

However, in the wake of this achievement, Howard’s attitudes about preventing fever had begun to shift. During his tours of European prisons, he was puzzled that he rarely encountered “jail distempers” there. To explain the disparity between these and disease-ridden English institutions, Howard developed a theory of jail fever based entirely on his own “experience.” He argued that prisoners could only be infected if privation, filth, and personal intemperance weakened them enough for the contagion to take hold. Young and healthy convicts who were used to “vigorous exercise” quickly became infected due to the “sudden change of diet and lodging” that “so affects the spirits of new convicts, that the general causes of putrid fevers exert an immediate effect on them.” As a counter-example, Howard pointed to himself. During his first tours, he wrote, he had attempted to avoid breathing in contagion by “smelling to vinegar… and changing my apparel…constantly and carefully.” A few years later, however, he wrote that he “entirely omitted” such precautions. In his opinion, the real protection against infection were his habits of “temperance and cleanliness” as well as the power of “divine providence.”3

By the time the second edition of State of the Prisons came out in 1780, Howard had visited hundreds of disease-ridden institutions and avoided contracting a serious infection. While friends privately cautioned him against such continual risk-taking, Howard’s superhuman invulnerability to disease had become a key feature of his celebrity.4 Celebratory poems about Howard became, in the estimation of two literary scholars, “nearly ubiquitous in the 1780s and 1790s” as poets from Erasmus Darwin to William Cowper celebrated his arduous travels and selfless virtue.5 William Hayley’s 1780 Ode, Inscribed to John Howard attributed Howard’s “matchless fame” to his “valor’s adventr’ous step” through “malignant cells” where “fierce contagion, with affright, repels.”6

This vision of Howard as a heroic and invincible figure appeared in numerous prints and lithographs and was captured evocatively in an unfinished work by famed painter George Romney, who depicted a defiant Howard striding confidently into scenes of melodramatic suffering and disease.7

Despite his reputation, Howard wasn’t able to evade contagion forever. While travelling through southern Ukraine in the winter of 1790, Howard contracted a serious fever and died two weeks later.8 Notwithstanding his untimely death, Howard’s emphasis on invigorating labor, self-regulation, and instilling personal hygiene in convicts exerted an enormous influence. By the heyday of the modern penitentiary in the mid-nineteenth century, Howard was lauded as the founder of “prison science.”9 While jails designed during Howard’s life reflected the eighteenth-century emphasis on eliminating effluvia via ventilation, their nineteenth-century successors focused instead on insuring that each inmate was placed in solitary confinement and given a strict regimen of work and moral instruction.10

In my larger project, I argue that this is partially due to a shifting locus of responsibility for preventing airborne disease. The attention of reformers shifted from the condition of the institution to the character of the individual, who became responsible for his or her own cleanliness and ventilation. To briefly illustrate this point, I will conclude with a quotation written several years after Howard’s death by naval health reformer Gilbert Blane:

Those only whose duty leads them to consider the subject, are aware how much the welfare of the human species depends on ventilation and cleanliness; and no one could render a greater service to his fellow creatures, than to impress on their minds the necessity of cultivating them as moral and religious duties.11

7. George Romney, John Howard Visiting a Prison or a Lazaretto, 1790–95, courtesy of the Museum of Fine Arts, Boston, MA.

The 1830s and ’40s were years of ferment in the United States. Politically, a sea change began in 1828 with the election of Andrew Jackson to the presidency and a break with the political elites of the Eastern seaboard. Socially, the years were ones of great transformation, as new immigrants promised to alter the country’s makeup. The decades saw huge technological innovations as well, with the spread of railroads making new regional and national connections, and the newly invented telegraph shrinking information gaps. Science took on a new cultural value across the western world, manifested in the United States with the founding of the Smithsonian Institution in 1846 as a scientific research institute, followed two years later by the American Association for the Advancement of Science.

The founding of the New York Academy of Medicine was part of this ferment. A group of prominent physicians in the city met informally on December 12, 1846, to see if there were interest in creating a new organization dedicated to promoting “orthodox” medicine. On January 6, 1847, the group met again to adopt a Constitution and By-Laws, to which 132 physicians affixed their signatures. At the group’s next meeting, a week later, the donation of Martyn Paine’s Medical and physiological commentaries (1840) began the Academy Library. That venture was one of the avowed purposes of the Academy: It was organized to separate “regular” from “irregular” medical practitioners such as homeopaths and other unorthodox physicians, and to provide for intellectual growth and sociability.

The Academy stood apart from the different medical societies that had arisen in New York City. Briefly, the New York County Medical Society and other county and state societies chiefly, though not exclusively, were concerned with credentialing and the business of medicine. These concerns were not absent from the Academy, or from others like the Philadelphia College of Physicians (1787), and the Richmond Academy of Medicine (1820). But the academies were more about mutual regard, professional development, and, in the tradition of the grand academies of Europe and our own National Academy of Sciences (1863), advising government on technical matters. This NYAM did throughout its history: helping to establish the city’s Metropolitan Board of Health in 1866, assisting in the creation of a chief medical examiner’s office in 1915, advising on city sanitation in the 1920s and ’30s and on maternal mortality in 1933, and providing expert opinion about marijuana as a “gateway drug” in 1944.

By the end of the 20th century, the Academy had moved beyond advising government to jump-starting its own programs for healthy aging, schoolchildren’s health, and healthy cities overall, and promoting urban health studies around HIV/AIDS and 9/11. By the early 21st century, working toward health equity became the goal, with a multitude of paths forward. Most recently the Academy has added its efforts to combatting the COVID-19 pandemic.

Throughout 2022 the Academy is celebrating its 175th anniversary. Today we launch a new online timeline of Academy milestones, exploring these and other high points of our history. A new series of programs, “Then and Now,” will look at signature areas of Academy work in current and historical context. We are planning a Celebration of the Library open house for the fall. Throughout the year we will be mounting blog posts on highlights and figures in Academy and Library history. We invite you to read, visit, and participate . . . so stay tuned here and on the website for more to come.