As the United States experiences high flu activity, we thought we’d look back on the 1918 flu pandemic, which lead to the deaths of 50 million people worldwide, including nearly 675,000 people in the United States.1

The first case of the so-called Spanish Influenza in the United States originated at Boston’s Commonwealth Pier on August 28, 1918.2 On September 3, it landed in nearby Brockton, Mass., where the disease became widespread by the middle of the month.

Ernest A. Burrill detailed the efforts of the city in Brockton’s Fight Against Influenza. One problem faced was a lack of food—sick parents could not cook for children, and residents were afraid to enter infected homes. A well-organized food department came to the rescue, preparing food at a community kitchen and delivering it to 388 sick people at its peak on October 10.2

Brockton officials established a field hospital to centralize medical staffing. “A tented city grew up over night,” and within days of its opening, patients moved from area hospitals to the tents. During its two weeks of operation, the field hospital treated more than 300 patients. The food department provided the makeshift hospital with “5 dozen ham sandwiches, 3 quarts chicken stew, 2 dozen cakes, 32 quarts of gruel, 27 quarts of broth, 35 quarts of milk, 9 loaves of bread, in addition to jellies, preserves, etc.”2

The flu peaked in Chicago in mid-October. A month earlier, an ambitious public health campaign instructed residents to cover their mouths when sneezing and coughing.  In a 1918 report, Commissioner of Health John Dill Robertson wrote, “The danger of uncovered coughing and sneezing has probably been so thoroughly impressed upon the people of the City of Chicago that fruit will be borne from this source for years to come.”3 (Chicagoans, is this fruit still being borne?) 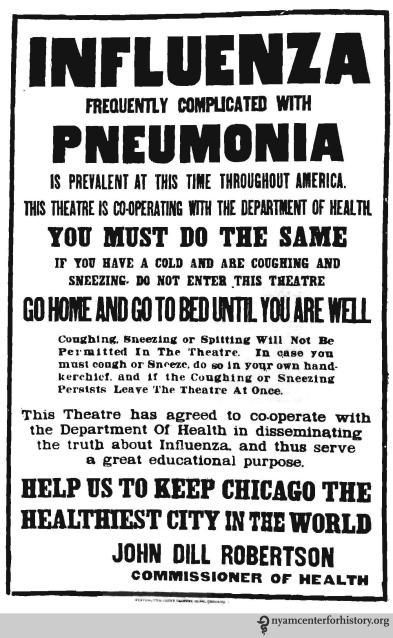 A poster from Chicago’s Public Health campaign, presumably released prior to the Health Department closing the theaters.

In Chicago as in much of the country, “places of amusement were closed” at the peak of the pandemic. “This included theaters of all kinds, cabarets, dance halls, athletic meets, and everything of this kind. People were advised to go home and to get nine hours of sleep, on the theory that rest was the best preventive medicine that could be had. In fact, by cutting out all these night assemblages there was no place for the people to go and they had to remain home.”3

In addition, Chicago and other cities banned public funerals. In Chicago, only 10 mourners, not including clergy, could attend for fear of spreading the disease from the family of the deceased and through contact with infected premises.

Chicago churches, schools, and workplaces remained open, although clergy were instructed to keep services short and officials closely monitored school conditions. “Nothing was done to interfere with the morale of the community,” wrote Dill.  The Health Department did require closing, thorough cleaning, and subsequent inspection of places of public assembly.3

A selection of captions from Chicago newspapers.

Scientists had developed a vaccine for pneumonia, which often co-occurred with the flu in 1918, and health officials distributed 174,264 doses in Chicago once determining the severity of the pandemic.3  The Brockton report indicates that the New York City Health Department prepared a vaccine for the flu strain, but it was not yet available to them.2

While the current flu outbreak does not compare to the 1918 pandemic, we can learn from earlier experiences. Cover your mouth, do what you can to avoid contact with sick people, and be grateful that you can get vaccinated. 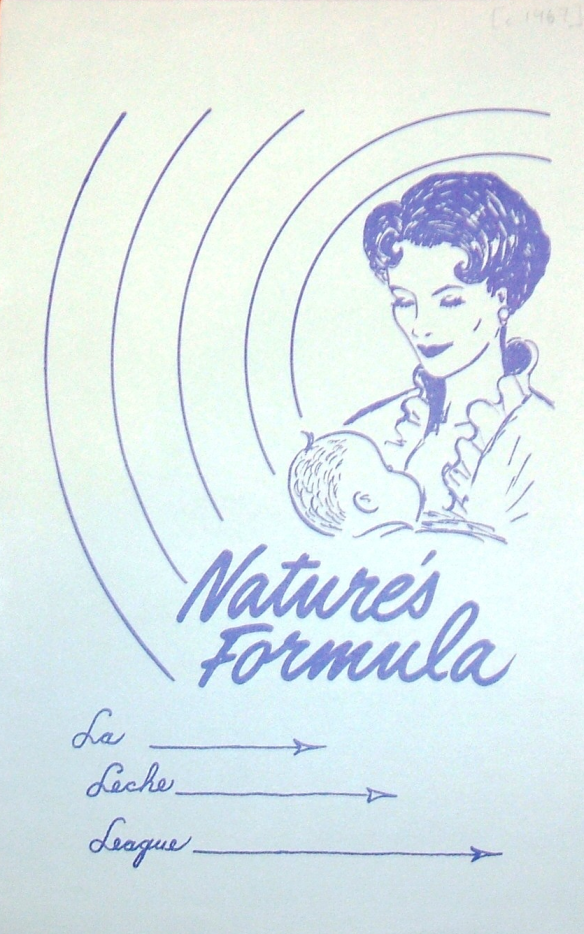 Our special mini-series issues related to environmental history, A World Not Quite Fatal: New Views on the History of Environmental Health, continues this Thursday, January 17, 2013, with a talk by Jessica Martucci from Mississippi State University about breastfeeding and fears of environmental contamination. Both human and animal studies from the mid-20th century suggested that toxins such as DDT might be concentrated in mother’s milk and could be transmitted to their babies. The La Leche League published a pamphlet called “DDT and Mother’s Milk” in 1972, encouraging mothers to continue to breastfeed their babies despite these concerns. Professor Martucci will look at how discussions surrounding the possible transmission of toxins through breastfeeding formed part of a larger conversation about both the “nature” of motherhood and infant feeding and a developing movement of environmental activism.

Jessica Martucci is an Assistant Professor in the History Department and Gender Studies Program and is associate member of the Center for the History of Agriculture, Science, and the Environment of the South at Mississippi State University. She received her B.A. in Biology and Environmental Studies at Oberlin College, and her M.A. and Ph.D. in the History and Sociology of Science at the University of Pennsylvania. She is currently finishing her first book project, Back to the Breast: Natural Motherhood and Breastfeeding in the 20th Century.

The New York Academy of Medicine (NYAM) Section on the History of Medicine and Public Health is pleased to announce its Third Annual History Night to be held on April 8, 2013, 6:00 pm – 8:00 pm. The event will take place at NYAM located at 1216 Fifth Avenue at the corner of 103rd Street.

We are inviting all those interested in presenting to submit papers on topics in the history of medicine and public health for consideration. Papers submitted previously at other educational events are eligible for submission. The time allotted for those papers chosen for presentation will be 15 minutes, with an additional 3-5 minutes for Q & A.

A panel of members of the NYAM Section on the History of Medicine and Public Health will select the papers to be presented.

The submission deadline is February 1, 2013. Papers may be submitted electronically to Donna Fingerhut at dfingerhut@nyam.org. Questions may be directed to Donna at 212-419-3645.

By Johanna Goldberg, Information Services Librarian Forget the articles: Advertisements can be the most interesting part of medical journals from decades past. The ads below, published in the American Journal of Obstetrics and Gynecology between 1940 and 1970, show how … Continue reading →

We are renovating! Due to a project to improve the environmental conditions in the Drs. Barry and Bobbi Coller Rare Book Reading Room at The New York Academy of Medicine, the Reading Room will be closed to readers from February 1, 2013. We anticipate that the room will reopen for use on June 1 2013.

While some materials will continue to be accessible for use, portions of the rare book collection will not be available throughout the renovation period, and readers will be relocated to another space in the building. We will do our best to accommodate readers and reference requests, but please note that response times will be slower and appointment times may be limited.

If you have plans to use the collections this spring, please contact Acting Curator and Reference Librarian for Historical Collections Arlene Shaner at history@nyam.org or 212-822-7313 as soon as you have information about your plans, to verify whether the materials you would like to see will be available for use.

We are looking forward to welcoming readers back to a much-improved space in the early summer and thank you in advance for your patience during our renovations. We will post updates here on the blog throughout the project.