The recent death of physician and epidemiologist Donald Ainslie (D. A.) Henderson (1928–2016) brings to mind the heady days of the 1950s, ’60s, and ’70s. With the advent of vaccination, insecticides (for cutting down disease vectors), sanitation, and the full research armamentarium of microbiology, eliminating dread diseases once and for all, worldwide, seemed possible.  D. A. Henderson did that for smallpox. And in the collections of the Academy library, we have a small memento of that eradication campaign. The two-pronged (“bifurcated”) needle became the quick and easy vaccination device used to protect susceptible populations from that disease. 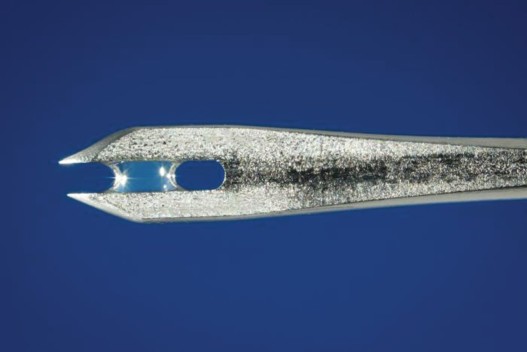 Here is Henderson’s recounting of the needle’s development, in about 1972:

I visited Wyeth laboratories …and they showed me this wonderful device which they developed. A little needle about ‐ well, about so long. There are two little prongs on the end. They called it a bifurcated or sort of two fork needle. The idea was you put the needle into the vaccine and you just withdrew it. Between those two prong[s], the little bit of vaccine would be held and then they thought you press it through the skin. In this way the amount of vaccine you could get from a vial was 100 doses rather than 25 doses. . . .We took it to the field into Kenya and Egypt and did several 100 children and we did it very vigorously. . .  Every single one of them was successful. So this was incredible. All of a sudden we were going to have four times as much vaccine than we thought we had or we are getting, with these wonderful needles.1

In the course of the smallpox eradication campaign, public health workers used needles such as this to vaccinate millions of people—the goal was 80% of the population. In 1979, the World Health Organization declared that natural endemic smallpox had been eliminated from the globe.2

This was a great feat. Smallpox has been infecting humans since before recorded history. It was so virulent, especially among the inhabitants of the new world, that providing smallpox-infected blankets to Native Americans during the French and Indian War of the mid-1700s became one of the first examples of biological warfare.3 Famously, in the late 18th century, Edward Jenner found that cowpox could be used to vaccinate against smallpox, and in the western world, cases subsided thereafter.

In the developing world, smallpox was still endemic and often fatal. Prior to its eradication, smallpox killed nearly 300 million people world-wide in the 20th century alone.4 And those who survived carried disfiguring scars.

The decision to mount a world effort to eliminate smallpox was not taken lightly. In 1966 the World Health Organization took up a funding proposal for a smallpox eradication campaign. Four other efforts had already failed: hookworm, yellow fever, yaws, and malaria.5 Public health officials were beginning to think that eradication campaigns were too expensive, too time-consuming, too technically-challenging, and too “top-heavy”– the externally mandated efforts pushing aside the building up of public health infrastructure in developing countries. Nonetheless, WHO narrowly passed the ten-year, $24M plan. Henderson had had a role in drafting it: some years before, in charge of the surveillance section at the Centers for Disease Control in Atlanta, he had played a role in adding a smallpox vaccination program to a fledgling measles vaccination program for West Africa, funded through the U.S. Agency for International Development (USAID). Thus he already had practical experience in mass smallpox vaccination, and after the WHO passed their plan, he was named to head the effort.

According to Michael Oldstone:

Henderson used two principal strategies. First, international vaccine testing centers were developed to ensure that all vaccines met the standards of safety and effectiveness. This guaranteed that only active vaccines would be used. Second, reducing the number of smallpox cases to zero became the established goal rather than documenting the number of vaccine doses given. With this goal, effective surveillance teams were set up to both report and contain outbreaks of smallpox.6

Success was beyond expectation. As Henderson recalls:

About 4–5 years into the programme, we had begun thinking that eradication within another 3–4 years might be feasible. The West African programme had proceeded so well and so rapidly that it stunned everyone. Most of East Africa also became smallpox free only a few years later. From 1967 to 1973, the number of smallpox endemic countries dropped dramatically—from 31 to only five—India, Pakistan, Bangladesh, Nepal and Ethiopia. South Asia was a formidable problem. . . .7

World Health: The Magazine of the World Health Organization (May 1980), cover.

The WHO effort finally eradicated smallpox in these few remaining countries. “In 1975 [smallpox was eliminated] from the entire Asian continent, in 1976 from Ethiopia, and in 1977 the last case was reported in Somalia [having spread from Ethiopia].”8 For two more years, surveillance continued, with rewards offered for reports of active cases. None was found. WHO set up a Global Commission to review the reports, and on December 9, 1979, certified worldwide eradication. Smallpox was gone.9

Henderson attributed his success to three factors: “surveillance-containment, . . . a heat-stable vaccine of assured potency, and a better technique for vaccination.”10 Oldstone had noted the first two, but clearly Henderson felt the third was just as important, the bifurcated needle!11

Our needle came into the collection quite recently. In 2010 Dr. Henderson gave a lecture at the Academy, for the Malloch Circle of the Friends of the Rare Book Room.12 At the conclusion of his talk, Dr. Henderson asked if anyone would like a smallpox vaccination needle to keep.13 Historical Collections Librarian Arlene Shaner claimed one for our collections. It remains a symbol of that eradication campaign—a testimony to the possibility of global effort achieving enduring relief from suffering and death from smallpox.

The Academy’s smallpox inoculator. The needle is 2 inches (5 cm) long.

1. Paul O’Grady (Interviewer), “DA Henderson Oral History,” The Global Health Chronicles, accessed August 29, 2016, pp. 10–11.
2. D. A. Henderson, “A victory for all mankind,” World Health: The Magazine of the World Health Organization (May 1980), pp. 2–4.
3. Michael B. A. Oldstone, Viruses, Plagues, and History, revised and updated ed. (New York: Oxford University Press, 2010), p. 53.
4. Oldstone, Viruses, Plagues, and History, p. 53.
5. Henderson DA, Klepac P., 2013, “Lessons from the eradication of smallpox: an interview with D. A. Henderson.” Phil Trans R Soc B 368: 20130113, accessed August 29, 2016.
6. Oldstone, Viruses, Plagues, and History, p. 83.
7. Henderson and Klepac, “Lessons.”
8. Oldstone, Viruses, Plagues, and History, p. 84.
9. Henderson, “A victory for all mankind,” pp. 2–4.
Not entirely gone: stocks of smallpox virus remain for study. In December 2002, the U.S. Government began smallpox vaccination for select military personnel to protect against biological attack. John D. Grabenstein, RPh, PhD; William Winkenwerder, Jr, MD, MBA, “US Military Smallpox Vaccination Program Experience,” JAMA. 2003;289(24):32783282. doi:10.1001/jama.289.24.3278.
10. Henderson and Klepac, “Lessons.”
11. Though eradication has a strong public appeal, the smallpox project was more the exception than the rule. Henderson remained quite skeptical of other proposed eradication efforts, notably those for polio. He went into some of his reasons in Henderson and Klepac, “Lessons.”
12. The New York Academy of Medicine, 2010 Annual Report (New York: The Academy, [2011?]), p. 13.
13. It seems a curious practice. The only thing similar of which I am aware is the military habit of “coining”: where superior officers mint commemorative coins that they dispense to colleagues and those lower in the ranks as a sign of approval for work done. As head of the quasi-military Commissioned Corps of the U.S. Public Health Service, Surgeon General C. Everett Koop followed a similar practice. John S. Halamka, “The Tradition of Coining,” Life as a Healthcare CIO, April 17, 2008, accessed August 29, 2016.