For the third year running, we are partnering with our neighbor The Museum of the City of New York for a three-part series: “Who Controls Women’s Health?: A Century of Struggle.” Marking the centennial of New York State suffrage law, Century of Struggle is a free, three-part talk series that examines key battles over women’s ability to control their bodies, health choices, and fertility. The series reflects the Academy’s long history of involvement with improving maternal and infant mortality, and complements the forthcoming exhibition at MCNY Beyond Suffrage: 100 Years of Women and Politics in New York.

Next in our special series, “Legacies of War: Medical Innovations and Impacts”—how the experience of war prompts medical innovation—we welcome Professor Beth Linker on September 28 to speak on World War One and veteran care, and Professor John Kinder on October 17 to explore the history of American war through the bodies of five veterans.

Starting in mid-September, Kriota Willberg will lead an Embroidering Medicine Workshop. This workshop is the culmination of a six-month artist residency –the first ever such at the Academy Library- dedicated to the intersections between body sciences and artistic practices. The workshop explores the relationship between medicine, needlework and gender. Willberg focuses on the areas of the collection invoking the ideals of femininity and domesticity, as well as needlework (in the form of ligatures, sutures, and stitching of the body.)

Our collaboration with Atlas Obscura continues this year with topics like Anatomical Illustrations, Astronomy and Astrology, Cookery, and Women’s Medicine. The intimate sessions in our beautiful Drs. Barry and Bobbi Coller Rare Book Room offer a chance to be enlightened by early alchemists, philosophers, scientists, mathematicians, physicians, and midwives. You’ll leave with the wisdom that they penned, including the ancient secrets of how to turn metal into gold, what fruit to eat to delay labor, and how the Zodiac Man guided medical practices. 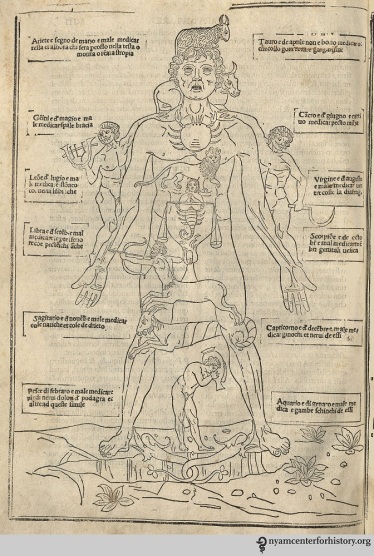 Later in the fall, socio-medical scientist Ijeoma Kola of Columbia University’s Mailman School of Public Health presents “Unable to Breathe” on November 14. As asthma hospitalization rates skyrocketed, researchers shifted their focus from psychosomatic explanations to the toxicity of black urban locales. This talk explores how emerging asthma research in the 1950s and 1960s bolstered broader African American struggles for equity.

Download the Summer/Fall Catalog for more details. To register, click the names of events in the catalog, or visit www.NYAM.org/events. You can keep up to date on our events and activities by following us on social media, @nyamhistory.

We look forward to seeing you throughout the second half of this year.