This week and next, two recipes will go head to head, vying for your votes. The following week, the winners of the first two rounds will duke it out for the honor of being named the champion of our first Food Fight Club.

The smackdown begins with Snail Water versus Pear and Tomato Chutney.

This lovely snail water recipe comes from A Collection of Choise Receipts, a late 17th-century English manuscript written in exquisite penmanship, perhaps written by a professional scribe. Snail water was thought to treat ailments including “sharpness in [the] blood” and appetite loss. Learn more about snail water in our blog archives. 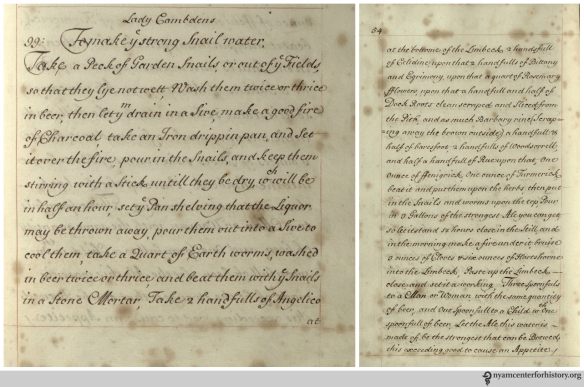 From A Collection of Choise Receipts. Click to enlarge.

It takes a bold competitor to go up against this beauty. But we have one: Pear and Tomato Chutney from the American Can Company’s undated Relishes from Canned Food pamphlet. As early as the 1850s, commercially canned goods—especially sardines, tomatoes, condensed milk, and fruits and vegetables—found an eager consumer audience in the Western United States. Their popularity only increased over time; by the 1930s, foods from supermarkets were increasingly prepackaged (learn more in our 2015 April Fool’s blog—the food history facts are true!).

Pear and Tomato Chutney from American Can Company, Relishes from Canned Foods, no date. Click to enlarge.

Which recipe should move on to the next round? Vote for your favorite—be it the most appealing, least appealing, or one that just tickles your fancy more—before 5 pm EST on Monday, March 14.