This post title is not strictly true. Or remotely true, actually. Bezoars are not found in rams’ eyes (to the relief of sheep everywhere, I’m sure). Maimonides, the 12th century Sephardic Jewish philosopher, reported an Eastern belief that bezoars could be found “in the eyes of rams,” though he then went on to note that “it is found in their [rams] gallbladder and this is true.”[i] Bezoars are in fact found in goats’ stomachs and gastrointestinal tracts, as well as that of other animals such as sheep, cows and us humans.

A bezoar is a mass of undigested or inedible material found in the GI tract. Today, they are typically grouped into four categories: phytobezoars (made of vegetable or fruit fibers), lactobezoars (made of milk proteins), trichobezoars (made of hair and food particles) and pharmacobezoars (aggregates of various medications).[ii] Nowadays, if a bezoar doesn’t pass through the digestive system on its own they can be treated through medication to dissolve the mass, lavage therapy, and even surgery.

Once upon a time you may have wanted one in your system. I referenced this in Poisons, Pirates, and Professors in September for National Talk Like a Pirate Day. If you had been poisoned by an attacking pirate, you’d want to swallow a bezoar to cure yourself. Pierre Pomet, 17th century French druggist, wrote of bezoars curing all manner of things from smallpox to epilepsy, ending with its ability to work as an antidote to poison.[iii]

The word bezoar comes from the Arabic bazahr or badzehr, meaning counterpoison[iv] and it is also mentioned in ancient Hebrew texts as bel zaard, “master” or “master of poison.”[v] Its power to counteract poison may come from a near eastern goat, the markhor. In Persian, mar is snake and khor means to eat. Snake-eater. So presumably immune to venom. Except that the markhor is an herbivore dining upon grasses and leaves. Misnomer alert! The name may have to do with their corkscrew-like horns (reminiscent of a winding snake) or that they are known to kill snakes on occasion.[vi]

This handsome markhor is clearly eating carrots or yam, not a snake.  Source: A. Savin, A Markhor in Berlin Tierpark, Wikimedia Commons.

Whatever the origins of the belief in curing poison, bezoars were popular in the Middle Ages and into the 17th century as antidotes. They were carried as charms, included as decor or attached to drinking and eating vessels to protect the diner, and tests were even designed to detect fakes –the selling of which was a punishable offense.[vii] 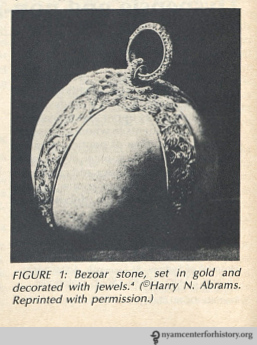 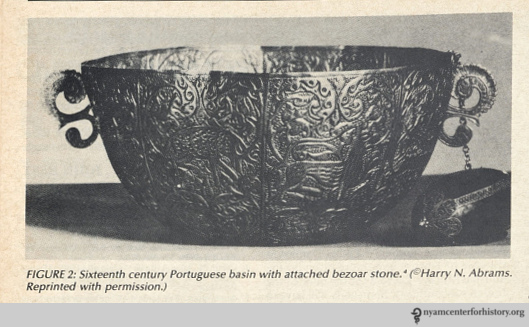 Another Frenchman represented in our collections’ holdings, barber surgeon Ambroise Paré, conducted an experiment to test the healing properties of a bezoar stone in the 1500s.[viii] A royal cook caught stealing silver had been sentenced to death. The cook was offered the alternative of being poisoned and then being given a bezoar under Paré’s supervision. If the cook survived the poisoning, he’d be spared. The cook lived only seven hours after the poison was administered, and Paré concluded the bezoar could not cure all poisons.

Still, the bezoar as antidote and mythical token lives on in the popular imagination. In J.K. Rowling’s Harry Potter stories, Professor Snape quizzes Harry on where he’d find a bezoar in his first potions class and later when his friend Ron Weasley is poisoned with mead –intended for Professor Dumbledore- Harry quickly shoves a bezoar down Ron’s throat.

Box of bezoars and Half Blood Prince movie still.  Source.

Join us for a free First Mondays lunchtime tour in our Drs. Barry and Bobbi Rare Book Reading Room for a chance to see our bezoar in person. It’s well worth a visit even if poison and goat guts aren’t high on your to-do list; the Rare Book Room is pretty much the real life Hogwarts.

2 thoughts on “Found in the Eyes of Rams: The Bezoar and its Powers”