Last week I had the pleasure of hosting renowned chef James Kent in the Rare Book Room.  Chef Kent is interested in the history of American cooking, and as I was selecting highlights for his visit, I was reminded–again!—of the depth and variety our American food holdings.  Here are a few of our favorite early American cookbooks from our stacks (a later post will look at late 19th and early 20th-century highlights.) 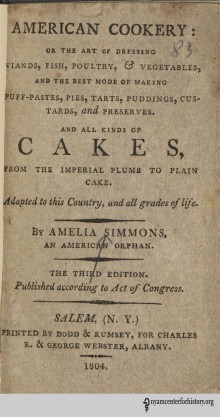 The Academy library has one of only four copies in the United States of the slim third edition of Amelia Simmons’ American Cookery, long considered the first homegrown American cookbook. The book’s intriguing title page, modified only slightly from the 1796 first edition, credits the book’s authorship to one “Amelia Simmons, an American orphan.”  The author’s nod to her Americanness is one of the earliest to occur in print—and possibly the earliest in culinary sources.

American Cookery likely drew from manuscript cookbooks with recipes known for some time, and now appearing in print. The recipes in these pages were known throughout the colonies and appealed to Americans living both north and south; they made use of thriving American crops, including corn, peas and beans. Recipes for pumpkin pie, American citron, and an adventurous chowder, composed of fried pork, fish and crackers, were recorded here in print for the first time.

Another early and influential American cookbook was authored by Mary Randolph, a Virginia housewife turned entrepreneur whose culinary creations drew generously on local crops. Before the publication of Randolph’s The Virginia Housewife in 1824, many home cooks in Virginia relied on English cookbooks, but found these sources lacking in recipes drawing on local plant sources.  Randolph earned her culinary chops—and her nickname, “the Queen” —while supervising the cooking in the kitchen of her boarding house in Richmond.  When she retired, she collected her recipes and published them. Randolph had a soft spot for bread; recipes for cakes and biscuits occupy a lengthy section of the book, and include instructions for making batter cakes (using hominy and cornmeal), “Apoquiniminc Cakes” (beaten biscuits), and corn bread.  Other favorites include classic southern dishes like sweet potatoes, peach pie, boiled turnip tops, ham, and apple fritters. 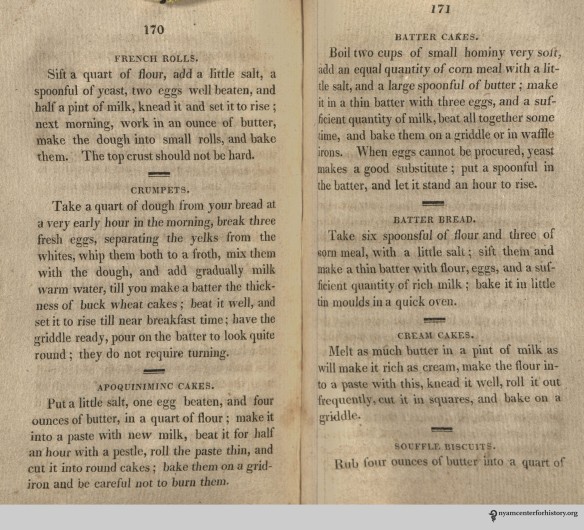 Pages from The Virginia Housewife by Mary Randolph.

A number of cookbooks published during the 19th-century in America targeted immigrant audiences, hoping to minimize their anxiety about maintaining their own food traditions while embracing their new country’s agricultural resources and culinary influences. A favorite of these is Henrietta Davidis’ Praktisches Kochbuch. First published in 1844, Praktisches Kochbuch, or Practical Cookbook, was easily the most popular cookbook of the nineteenth century in Germany.  It was republished in innumerable editions well into the twentieth century, including a number of American editions, which were brought out by a Milwaukee publishing house seeking to tap the large German-American community in Wisconsin. In our 1897 edition, Davidis clarifies her intention to write a cookbook that combines German and American elements in her preface:

Ein deutsches Kochbuch in Amerika soll nicht dutsch oder amerikanisch, sondern deutsch-amerikanisch sein.  [A German cookbook in America should not be German or American, but German-American.]

For easy reading, the introduction and recipes were published in German, with English translations next to the name of the dish. Indexes in both German and English made it easy for new students of English to use the book. 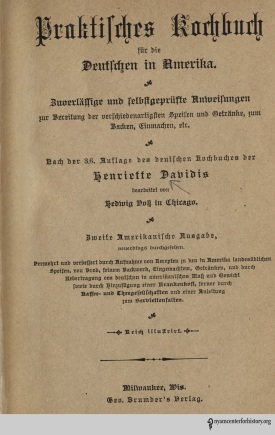 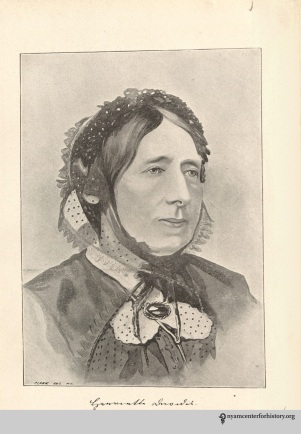 A number of manuscript cookbooks in our collection add dimension to the many American stories of cooking in the immigrant kitchen. A handwritten collection of recipes kept by the Hoffman family, papermakers by trade who opened their first mill in 1766 in what is now Hoffmanville, Maryland, dates between 1835-1850.

The manuscript contains a fascinating mix of ethnically German recipes, many suggestive of the regional culinary style now called “Pennsylvania Dutch,” and then-standard American recipes, some of which show the writer, apparently a German immigrant, struggling to master an unfamiliar cuisine.  Recipes for “sowar crout” and “soft rivals” (small dumplings) in milk soup suggest that the Hoffman household continued to eat German dishes, while recipes for pound cake, pumpkin pie and ketchup attest to a desire to incorporate the influences of their new country at the table.

In 2017, we are working with our volunteer Chef Curator, Matt Jozwiak, on a variety of projects to increase awareness and use of our culinary collections. Matt is exploring historical recipes, helping us develop food-related events, and coordinating outreach to the culinary community to help them access the resources we hold. Two of his adapted recipes featured at the Academy’s 2016 Gala.

Matt also works with the Academy’s food policy group, which focuses on better food procurement for East Harlem community based organizations.  He is also currently developing his own nonprofit, which is focused on the better use of food waste.

We’re looking forward to serving up a number of collaborations with Matt this year, continuing a long tradition of great American food.