Today’s guest post is written by Dr. Margaret Humphreys, Josiah Charles Trent Professor in the History of Medicine at Duke University. She is the author of Yellow Fever and the South (Rutgers, 1992) and Malaria: Poverty, Race and Public Health in the United States (Johns Hopkins, 2001), Intensely Human: The Health of the Black Soldier in American Civil War (2008) and Marrow of Tragedy: The Health Crisis of the American Civil War (2013). On Tuesday, February 21 at 6pm, Humphreys will give The John K. Lattimer Lecture: “The Marrow of Tragedy: Disease and Diversity in Civil War Medicine.” To read more about this lecture and to register, go HERE.

In a memorable scene from the movie Gone with the Wind, Southern belle, Scarlett O’Hara, picks her way through the battle-wounded men lying on the ground near the train station in Atlanta, frantically seeking Dr. Meade to help her with her sister-in-law Melanie’s imminent delivery.  Meade brushes her off and turns to a screaming soldier, telling him that his leg would have to come off, and without anesthesia.  The man’s screams echo as Scarlett heads back to Melanie’s bedside.  This cinematic portrayal of Civil War medicine reflects a wide belief that there was no anesthesia at that time.  Indeed, it was said that the war occurred “at the end of the medical middle ages.”  (This quotation is widely attributed to Union Surgeon General William Hammond, but without citation). 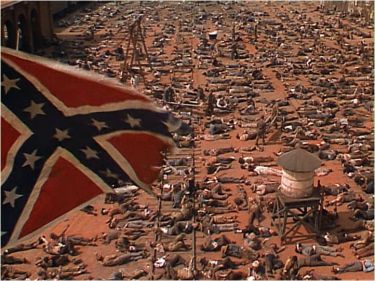 In my book, Marrow of Tragedy: The Health Crisis of the American Civil War, I begin from a different perspective, recognizing that there was such a thing as “good medicine” and “bad medicine” during the War.  Medical care could be effective, and it could make a difference in disease and injury outcomes.  For example, chloroform and ether anesthesia meant most surgery occurred with the patient unconscious (although Confederate surgeons did run out of these supplies in desperate circumstances, such as the siege of Atlanta near the end of the war).

Alarming as the notion of amputation completely without anesthesia, are the revealing mortality rates from disease at this point in the war. Put simply, for every one white Union soldier who died of disease during the War, a little over two black Union soldiers died, and almost three Confederates succumbed.[i]

How can we account for these differences?  A major factor was the quality and quantity of food, a core ingredient of the modern concept of “social determinants of health.”  White Union troops also received better hospital care, calling on part of the strong social networks of the folks back home and their political impact.  The Union hospital system was much better funded, with full access to important medicines, such as quinine, opiates, and anesthetics; and the technology of cleanliness, which included clothing, soap, and disinfectants.  Nursing care was key, as well, with northern hospitals staffed by volunteer nurses, while those in the south were often civilians or slaves challenged by lack of formal training as well as lack of resources.

To learn more about Civil War medicine, join us on Tuesday, February 21 at 6pm. Register HERE.