Today’s guest post is written by Kriota Willberg, New York Academy of Medicine’s Artist-in-Residence researching the history of sutures and ligatures.  Through graphic narratives, teaching, and needlework, Kriota explores the intersection between body sciences and creative practice. This past September, Kriota taught a four-week workshop entitled “Embroidering Medicine,” which explored the relationships between medicine, needlework, and gender.

Historically, needlework has been used to enforce stereotypes of women as docile, obedient, and incapable of creative or original thought.  Embroidery as a skill and a decorative medium was a required part of a woman’s education for centuries.  Across different periods of time, embroidery techniques (stump work, black work, etc.) and themes (religious, botany, etc.) in vogue provided only very narrow focus for creative outlets for women.  From the 16th century onwards, embroidery publications encouraged the use of pre-drawn patterns.  Images generally included geometric stitch motifs, flowers, plants, and animals. Many women, including Mary Queen of Scots translated images from books such as the Icones Animalium (1560) and La Nature et Diversité des Poissoins (1555).[1]

The cultural pressure to recreate existing patterns and images has been the basis of the argument that a craft such as embroidery is inherently unoriginal. In the 16th century and later, many people considered women incapable of original creative thought, proved by the adherence of women to unimaginative media such as embroidery.

As the Academy’s Artist-in-Residence, I wanted to facilitate an embroidery workshop that connected the histories of women, medicine, and embroidery. In my own work I have done this by looking at the broad scope of health and medical literature available at the Academy Library, exploring feminist histories of medicine and of needlework, and using drawing and needlework to identify and describe intersections of medical and textile arts. In the workshop I encouraged participants to re-imagine the tradition of embroidery pattern translation by using historical medical imagery mostly created by male artists. 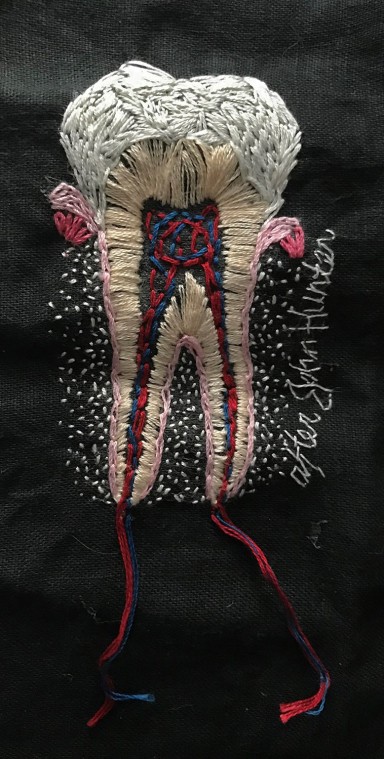 Dental anatomy after an image by John Hunter by Stephanie Russell.

The workshop was a great way to explore history on one’s own terms. Cultural forces limiting women’s economic and artistic independence have been at work for centuries in Europe and the United States. The establishment and regulation of craft and medical guilds in Medieval Europe began the limitation of women from the professional practices of medicine and needlework.[2] While working with materials from the historical collection, the status of women as medical professionals during different periods was a topic of conversation as we stitched our embroidery. 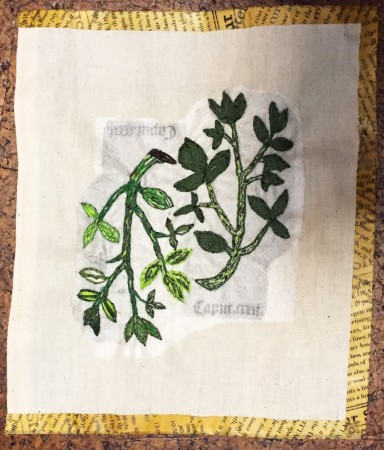 An embroidery in progress by Abby Tannenbaum, stitched from an image in the Hortus Sanitatis.

Our group (coincidentally all women) explored the library images, learned about the history of medicine, examined books about home economics and sciences, found images to work with that were interesting or personally relevant, explored historical descriptions of medical needlework (i.e. suturing the body), and practiced embroidery stitches. The products of this workshop embody the stitcher’s process and creative experimentation combining the history of medicine with the histories of feminism and the decorative art of embroidery.

There is a lot of creativity that can go in to re-imagining a pre-existing image. In addition to working with line, filling, and color, embroidery can add texture and depth through its use of various types of threads and yarns. The embroiderer studies the image she is recreating. Is it educational? Entertaining? Are certain anatomical structures or pathological states emphasized? The embroiderer interprets the original artist’s intentions, determines her own interests in the image, and re-works the image using color, texture, stitch variety, and fabric, to create a new work. To practice basic stitches, an embroiderer might choose to follow an original pattern closely or experiment and make “mistakes,” as one might when drawing in a sketchbook.

Anatomized genitalia from an anatomy book by Adriaan van de Spiegel (aka Spiegalius) and Giulio Cesare Casseri (aka Casserius) published in the 17th century. Stitched by Susan Shaw.

Embroidery is becoming a popular medium again and still provokes associations with hominess and winsome imagery. I was delighted to see workshop embroiderers re-imaging pictures of dental anatomy and dissected genitalia into images that are simultaneously comforting and disturbing. The embroiderers in this workshop are taking needlework in new and exciting directions!

Endnotes:
[1] Swain, Margaret. The Needlework or Mary Queen of Scots. New York, London: Man Nostrand Reinhold Company, Inc., 1973.
[2] I recommend reading The Subversive Stitch by Rozsika Parker and Women and the Practice of Medical Care in Early Modern Europe, 1400-1800 by Leigh Ann Whaley. Reading these books simultaneously has been a revelatory experience!