Alcoholics Anonymous first issued The Grapevine in June of 1944, seventy-four years ago this month.  In the journal’s inaugural issue, an uncredited author recounts the founding of the publication “in a big, smoke-filled room” where “six ink-stained wretches sipped at their Cokes … a cashier, a radio script writer: an author: a bookseller: an art director: a wife and mother of two.”  When questioned on the journal’s purpose, the mother of two explains.  It’s about “A.A.’s whole design of living.  There’s going to be a big, full-page on local group doings … and we’re planning to get all the big general stuff on alcoholism into the paper.  Best of all, we think, is the Servicemen’s Letter page…”[1]

While managed by senior advisor and Alcoholics Anonymous founder Bill W., The Grapevine was conceived and established by a handful of New York “A.A.” women. In “–the story of your magazine – – ” published in the December 1948 issue, the initial idea for the serial publication was credited to “Lois K., a New York member,” who suggested a trial run. A preliminary meeting between Lois K. and three other women in the program, Priscilla P., Grace O. and Marty M. (the latter was the founder of the National Committee for Education on Alcoholism) solved initial questions about content and funding.  They also decided that male representation was needed, and added two men to their staff, Chase H. and Abbott T. Alcoholics Anonymous founder Bill W. gave the plan his blessing, and in his first editorial for the publication, called The Grapevine, “a lighted lamp.”[2]

The initial print run was 1,200 copies, and demand was steady. Members voted on October 3, 1945 to designate The Grapevine as the initial periodical of A.A.  In 1944 and 1945, the journal was produced entirely by non-paid volunteers; by 1948, The Grapevine was supported by four paid staff.  In September of 1948, a smaller, pocket format was conceived (the earliest editions bear a fruit-heavy vine on the cover with the issue information but no title, in an instance of design safeguarding anonymity.) 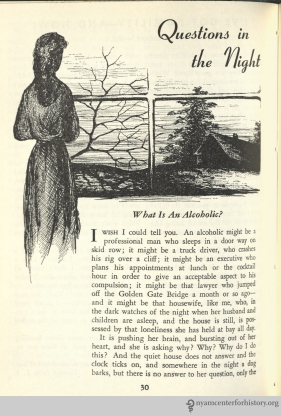 The first edition of “Alcoholics Anonymous,” or “the Big Book,” (1939) included only one essay about a female in recovery.  But from the beginning, The Grapevine was more inclusive of women’s stories.  An early article by founding member Grace O. focused on female membership and the perceived challenges by men of women at meetings.  Here, she ticks out some of the complaints expressed by male members, who believed “women talk too much,” “many women form attachments that are too intense,” “women’s feelings get hurt too often,” and that they frequently “are attention demanders;” she concludes that the way forward is with patience and acknowledgement of common purpose.[3]  As Leslie Jamison writes in her 2018 book, The Recovering, “Describing the ‘traditional beliefs’ that inflect how male and female drinking have been understood differently, one clinical textbook puts it like this. ‘Intoxication in a woman was thought to signal a failure of control over her family relationships.’”[4] 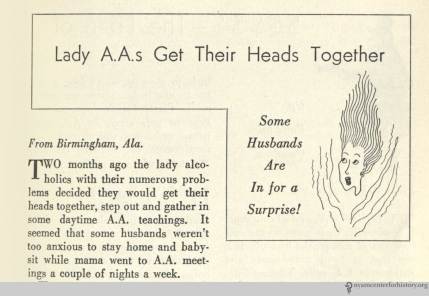 Pnina Levy demonstrates that in the earliest years of the organization men and women shared editorial and writing responsibilities for the serial, though the organization wasn’t always able to shake the entrenched cultural and social gender stereotypes of the early post-War period.[5] A May 1949 article, “Lady A.A.s Get Their Heads Together” acknowledged the challenges of “scurrying to fix dinner, wash dishes, prepare kids for bed, dress yourself and make the meeting across town by 8 o’clock.”[6]  In a “Vino Vignette” published in a 1946 issue, Esther E. tells of the difficulties of moving to her new town of San Antonio to kindle a regular meeting because she’s a woman. She’s successful assembling a group of three females and one male; eventually, as she says, “‘evah-thing’ caught fire.”  The December 1955 issue has no less than five articles by women, including articles about co-ed sponsorship, a narrative of a former female prisoner in recovery, and “My Son and I and AA,” written by a New York program mother.[7]

Today, The Grapevine is still in print, along with La Vina, for Spanish audiences.  Current information about subscriptions and excerpts from past issues can be found here.