We tend to take labor laws for granted nowadays. There are limits in many jobs to how many hours one can work, minimum wage determinations, and other protections for those in the workforce. However, this was not always the case, particularly for certain kinds of workers. In the early twentieth century, for example, these laws had nothing to say about women in many professions, such as those working in restaurants. This resulted in long, grueling hours for many women, without respite or protection from exploitation. 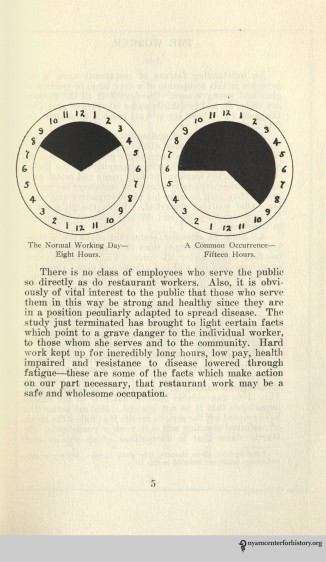 The Consumers’ League of New York City was alarmed by this, and decided to conduct a study, which turned into the pamphlet “Behind the Scenes in a Restaurant: A Study of 1017 Women Restaurant Employees.” The study had three aims: to find out the actual labor conditions in New York State restaurants; to determine whether these labor conditions led to a “wholesome, normal life” for the workers in these restaurants; and to see how these conditions impacted society as a whole (1916, pp. 3-4).

One thousand seventeen women were surveyed for this over the course of five months, in different locations such as their homes, their workplaces, and employment agencies. In New York City, all the interviews were given at the Occupational Clinic of the Board of Health (Consumers’ League of New York City, 1916, p. 3).  The workers came from all types of restaurants, allowing the League to get a representative sample of participants. Women of all ages were asked, as well as women of different nationalities (though women of color were noticeably absent). The largest group interviewed here was “Austro-Hungarian” (39%), followed by “American” (presumably meaning non-immigrants) (33%), German (8%), Irish (7%), Russian (4%), “Other”, (4%), English & Canadian (3%), and Polish (3%). While there is clearly an effort to be inclusive, there is still racist/ethnicist ideology that creeps in:

The largest single group is made up of Austro-Hungarians. The demand for cheap, unskilled labor in this occupation calls for the kind of service which these girls and others of the European peasant class can give. The outdoor life in the fields of their native land fits them for the hard labor required in a restaurant kitchen (Consumers’ League of New York City, 1916, p. 8).

Despite this language, the League was extremely concerned over the exploitation of these workers, noting that many worked 15-hour days (Fig. 1). Seventy-eight percent of workers exceeded a 54-hour week (Fig. 2), which was prohibited for women who worked in stores and factories. One of the participants, a 20-year old woman, worked 122 hours a week (Consumers’ League of New York City, 1916, p. 13)! 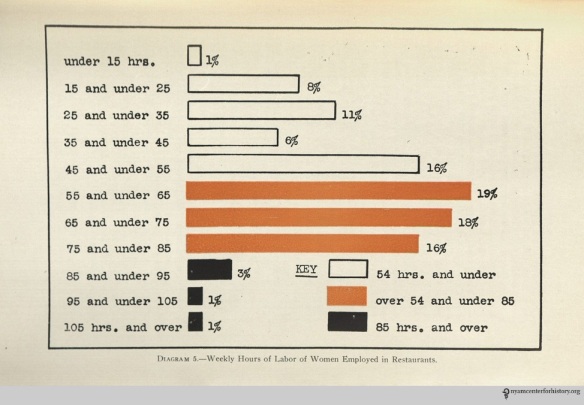 Fig. 2. Weekly hours of labor of women employed in restaurants. Behind the scenes in a restaurant… (1916).

The long hours (Fig. 3) were not the only thing this report examined. Other issues included tipping, irregularity of work, and the low wages earned by many in the profession. Such practices prevented these women from having regular social or family lives and had deleterious effects on their health.

The Consumers’ League argued that because of these conditions, a regular working day for restaurant workers was “not only reasonable, but…essential to the best welfare of their people as a whole” (1916, p. 28). They recommended a legislative amendment under the already-existing Mercantile Law. 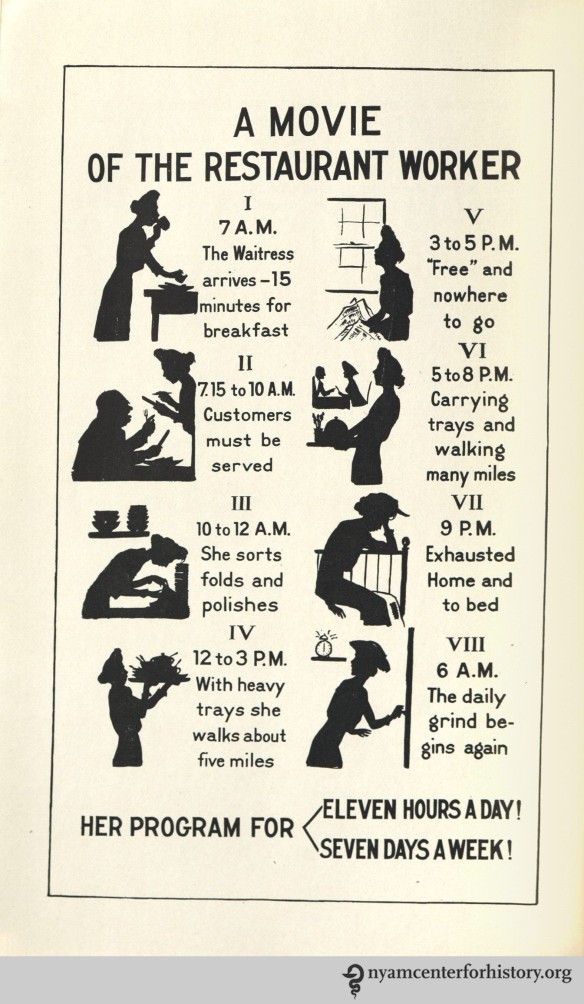 Did restaurant workers in New York State get the protections they so desperately needed after this report was published? Not immediately. By 1933, a New York law limiting the amount of hours women could work was passed, but then it was struck down by the Supreme Court in 1936. Women restaurant workers had to wait until the federal Fair Labor Standards Act was passed in 1938 to have the right to a minimum wage and overtime (Hart, 1994).

Although it did not instantly better the situations of women working in restaurant positions, this report and others like it raised awareness of what it was like to be working in these conditions, and they remain as a testament to those who toiled for long hours to clean, prepare, and serve food to so many others.

This book and other recent acquisitions will be on display and available for “adoption” at the Celebration of the Library night, also featuring a lecture by New Yorker author John Colapinto. Join us on April 11th at the Academy!

Consumers’ League of New York City (1916). Behind the scenes in a restaurant: A study of 1017 women restaurant employees. New York, NY: Author.