On Saturday, January 11, 1964, fifty years ago this past Saturday, the U.S. Surgeon General released a report that took the country by storm: Smoking and Health: Report of the Advisory Committee to the Surgeon General of the Public Health Service.

While surgeons general had made statements regarding cigarette dangers as early as the 1920s,1 this report marked the beginning of the Office of the Surgeon General’s practice of releasing “authoritative scientific statements,”2 which continues to this day. It also marked the first time a surgeon general report received enormous media attention.1 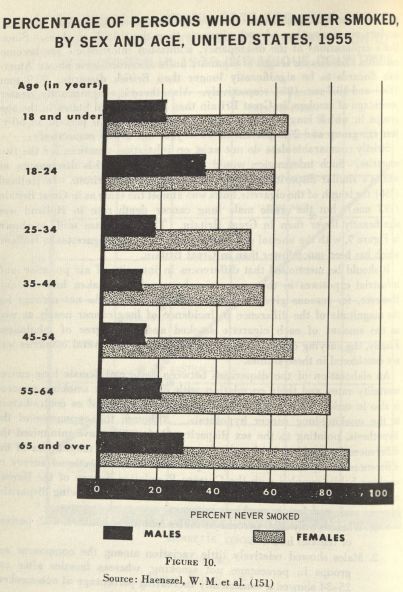 “Percentage of persons who have never smoked by sex and age, United States, 1955.” A chart from Smoking and Health. Click to enlarge.

To produce Smoking and Health, Surgeon General Dr. Luther L. Terry assembled a committee of 10 doctors from a variety of disciplines, none of whom who had previously spoken publicly about tobacco use, to review more than 7,000 publications, including articles, reports, statements from tobacco companies, and conference proceedings. The committee did not carry out original research, instead performing a thorough review of the literature, completed in just over two years.3

“Trends in Age-Adjusted Mortality Rates for Cancer by Sex.” A chart from Smoking and Health. Click to enlarge

The 387-page report made some dire conclusions:

On Sunday, January 12, newspaper front pages and other media sources  around the country featured the report.4 The New York Times alone published 10 articles mentioning the report that day,5 with one on reporters and government employees (including the surgeon general’s assistant for information) smoking in front of the nine no-smoking signs outside the news conference auditorium.6

The report had an immediate impact. In New York, the cigarette tax revenue was 5% lower in January 1964 than the previous year, and 18% lower in February. Cigarette consumption dropped 3.5% nationwide; while it rose in coming years, it never again reached its 1963 peak. One week after the report’s debut, the Federal Trade Commission (FTC) released plans to require health warnings in cigarette advertisements and packaging. In place of the FTC’s plans, Congress passed the Cigarette Labeling and Advertising Act of 1965, followed by additional labeling laws.7 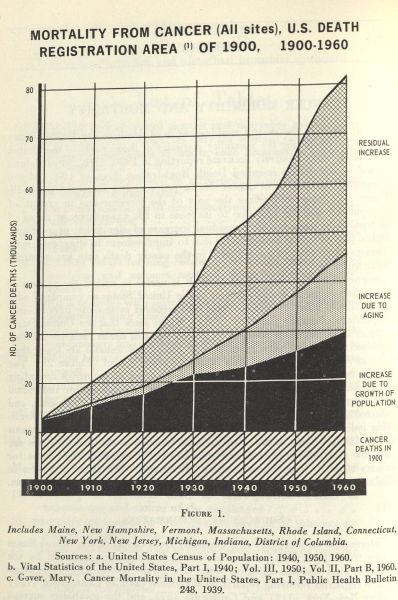 How far have we come? In 2011 (the most recent year available from the CDC),  about 19% of adults in America smoked, compared to the approximately 40.3% in 1964.8,9 Looking for information on how to quit smoking and reduce this percentage further? Visit smokefree.gov.

1.The Reports of the Surgeon General: Brief history. (n.d.). Retrieved January 7, 2014, from http://profiles.nlm.nih.gov/ps/retrieve/Narrative/NN/p-nid/58.

2. The Reports of the Surgeon General: Changing conceptions of public health. (n.d.). Retrieved January 7, 2014, from http://profiles.nlm.nih.gov/ps/retrieve/Narrative/NN/p-nid/59.

7. Sullum, J. (1998). For your own good: The anti-smoking crusade and the tyranny of public health. New York: Free Press.