With the celebration of Presidents’ Day in February, it’s an apt time to look at what related materials can be found in our special collections. Among our dental artifacts are two casts of Grover Cleveland’s upper jaw, received in 1929 from Mrs. Kasson Gibson, the widow of Grover Cleveland’s long-time dentist. The casts came with a typescript copy of a letter from Cleveland to her husband dated October 14, 1893 reporting on his successful use of a hard rubber prosthesis Dr. Gibson had sent him the day before.

An 1893 letter from President Cleveland to his dentist, Dr. K.C. Gibson. Click to enlarge.

Only five months earlier, on July 1, Cleveland boarded the yacht Oneida and sailed out into the Long Island Sound with a group of physicians including Joseph D. Bryant, William W. Keen, R. M. O’Reilly, and Ferdinand Hasbrouck. In mid-June, O’Reilly discovered a suspicious rough patch on Cleveland’s upper palate and suggested that it should be removed. Dr. Bryant, Cleveland’s personal physician, performed the surgery on the yacht with the help of several assistants. By July 5, Cleveland was recuperating at his summer home, Grey Gables, until Bryant performed a second brief surgery, again on the yacht, on July 17.

The first cast of Cleveland’s jaw, made in 1893, shows the extent of the damage to his upper palate and jaw while the second cast demonstrates how much healing and regeneration of tissue took place over the course of the next several years. Bryant operated through Cleveland’s mouth in order to minimize any external signs of injury, especially since Cleveland and his physicians were determined to keep the severity of his illness as quiet as possible. Gibson was not present at the surgery, but treated Cleveland as he recovered and took care of his other dental needs.

Cleveland’s physicians and friends released no information about the surgery to the public, telling visiting reporters at first that the President was suffering from rheumatism and then that he had only a mild dental ailment. When The Press, a Philadelphia newspaper, published a much fuller account of the operation later in the summer, it stunned the public. The country was in the middle of an economic depression and Congress held a special session on August 7 to vote on the repeal of the Sherman Act, as arguments between the advocates and opponents of free silver exacerbated the country’s economic problems in 1893. The suggestion that the President might be seriously ill could have created a serious panic.

As a manuscript letter to Gibson from 1896 in the NYAM collections shows, Cleveland was not without a sense of humor regarding his continuing dental maladies and their relationship to his political sympathies. “This morning about an hour ago there came out of a tooth on my right under jaw next to the dead tooth you fixed up a piece of gold the size of a small pin,” Cleveland wrote to Gibson on June 9, 1896. “This shows how completely I have been on the gold standard. I’ve got the gold in my possession. What shall I do with it?” 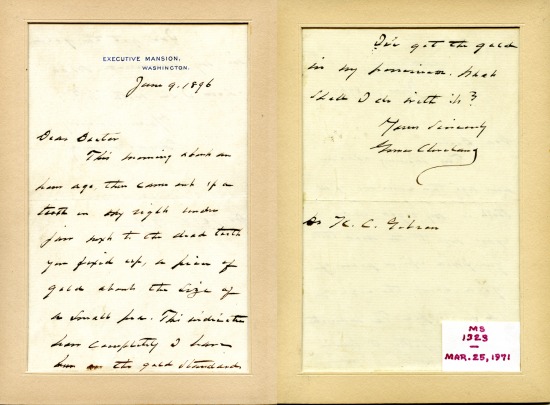 An 1896 letter from President Cleveland to his dentist, Dr. K.C. Gibson. Click to enlarge.

Joseph Bryant intended to publish an account of the Cleveland surgeries himself, but never completed one. After he died in 1914, Dr. William Keen, who assisted at both surgeries, wrote and published his own first-hand account of the operations, which can be read here.

2 thoughts on “The Secret Surgeries of Grover Cleveland”