This is one of several posts leading up to our day-long Performing Medicine Festival on April 5, 2014, which will explore the interrelationships of medicine, health, and the performing arts. Register for the festival here.

Dr. Luther Halsey Gulick (1865–1918), best known today as a father of basketball, was an ardent physical education educator and promoter. In 1903, he became the New York City public schools’ first director of physical education, a position he held for 10 years. He may have been one of the busiest men in the city; while holding the position, he co-founded the Campfire Girls with his wife, founded several physical education associations, wrote five books, and served as president of the Playground and Recreation Society of America.1 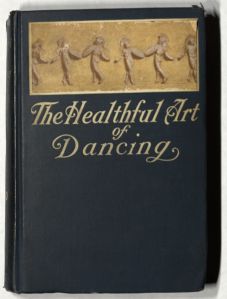 The Healthful Art of Dancing

In his 1910 book, The Healthful Art of Dancing, Gulick devoted a chapter to dance in education. Average New York City children, wrote Gulick, spent “Five hours a day in the schoolroom, and then the crowded, ill-ventilated tenement or apartment house, with perhaps a game of tag or hop-scotch or jump-rope in the midst of the hubbub and dirt of the street.”2 In 1905, a partnership with the Girls’ Branch of the Public Schools Athletic League allowed schoolgirls the same opportunity as boys: “Interesting and helpful recreation that would have a real part in their lives outside of school hours.”2

So began after-school folk dance classes for girls on city school rooftops, in gymnasiums, and in school basements. After one year of the program, 2,000–3,000 students were participating.2 Gulick paints an evocative picture:

These classes come after school. The roof playground, high above the chimneys and dangling clotheslines of the neighborhood, is a favorite place for them, unless the weather forbids. There is a piano up there that can be rolled out, and clean open air and sunshine—good things in New York—are all about.2

“The roofs of the New York Public Schools being used for dance,” a photograph from The Healthful Art of Dancing. Click to enlarge.

He goes on to describe the students’ enthusiasm:

One has to see [the dances] to get an idea of the kind of spell they possess for the children—how every muscle of their bodies responds accurately and eagerly to the exhilarating, well-cadenced rhythm of the music; how the dancers move back and forth, gliding, hopping, or tripping, crossing and recrossing, now fast, now slow, according to some intricate scheme at which an outsider can only stare in wonder.2 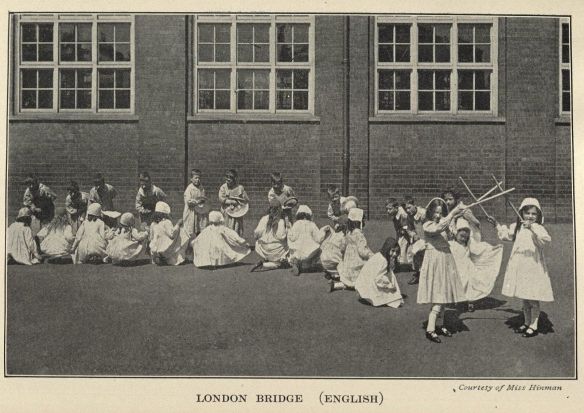 “London Bridge,” a photograph in The Healthful Art of Dancing. Click to enlarge.

And this joy did not end at school:

The noisy, crowded street and the dingy tenement will be happier places because of the healthy, full-blooded rhythm that still pulsates through their bodies—and their souls, too; for it means that they have a new feeling about life; it is ‘the little white bird’ that is going to keep on singing in their hearts.2

On the Lower East Side? Visit the Luther Gulick playground and dance in his honor.

1 thought on “The Healthful Art of Dancing”