The relationship between medicine and public health could be a complex one at the turn of the last century. In particular, the question of how to deal with infectious disease epidemics demanded that medical professionals and city officials grapple with sanitation and cleanliness, city infrastructure, water supplies, and garbage and sewage. Epidemics also raised questions of individual autonomy and the proper role of government. In response to these issues, Boards of Health emerged in many American cities in the second half of the 19th century. The New York Metropolitan Board of Health was the first, founded in 1866 after a campaign by Dr. Stephen Smith and The New York Academy of Medicine. 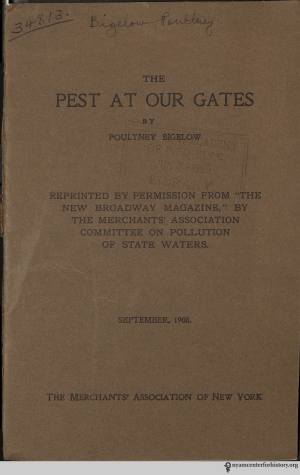 Relations were often fraught between the different groups responsible for the city’s health. Many physicians resented the interference of city-nominated health officials (many of whom they considered corrupt and/or incompetent) into the medical domain; health officials blamed doctors for failing to report cases of infectious diseases; and families regarded hospitals with suspicion and did their best to keep their ill relatives out of them.

The diseases most feared by New Yorkers included cholera, typhus, and typhoid fever. Between 1898 and 1907, at least 635 New Yorkers died from typhoid, with cases of the disease in the thousands.1 Typhoid spreads through water supplies contaminated with infected fecal matter. It can be transmitted via contaminated food or water, and more rarely, through direct contact with someone infected with the disease. As such, sources of the illness in late 19th-century New York were many and largely invisible, as the investigative journalist and author Poultney Bigelow described in 1908 in “The Pest at Our Gates”: typhoid sources ranged from the “placid, perilous Potomac” to “the deadly house fly,” “the fish and oyster menace” and the “perils that lurk in ice.”2 Fear of typhoid pushed public health initiatives and legislation to ensure safe water and food, adequate plumbing, and proper sewage control. 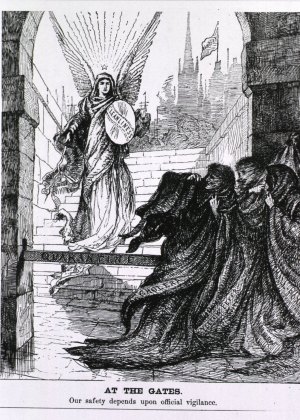 Cholera, yellow fever, and smallpox recoil in fear as a quarantine barrier and an angel holding bearing a shield of cleanliness blocks their way through the Port of New York. Image courtesy of the National Library of Medicine.

Fear of infectious disease often overlapped with fears about the changing face of the city and nation. As Alan M. Kraut explores in Silent Travelers: Germs, Genes and the Immigrant Menace, the relationship between immigration and public health in the United States has historically been informed by nativist debates about the identity of the nation and its ethnic makeup, fears about the potential limitations of scientific medicine, and the public health impact of immigration.3 As the gateway to America for hundreds of thousands of new immigrants, New York City became a focus for questions of quarantine and infectious disease. Epidemics, particularly of cholera, prompted many public health reforms in the city, especially increased scrutiny of immigrant arrivals at quarantine stations, including Ellis Island, where officials assessed arriving immigrants for their physical and mental health between 1892 and 1924.

In the case of typhoid, the specter of the foreigner as the reservoir of disease came to be personified by the Irish-born Mary Mallon, so-called “Typhoid Mary.” Mallon was a cook whose employment history in the kitchens of wealthy New Yorkers matched a spate of typhoid outbreaks in those same households in 1906. Mallon was a healthy carrier of typhoid, and was put under enforced quarantine by the Board of Health, which she vigorously resisted. On her release in 1909 she took multiple aliases and continued to work as a cook until 1915, when she was again detained and kept in isolation until her death in 1932. To some, Mallon was “the most dangerous woman in America”; to others, she was a symbol of the undermining of individual liberties by the government.4

In the case of typhoid fever, a combination of new vaccine technology and improved sanitation measures (particularly water chlorination) saw cases in the United States drop dramatically in the early 20th century. However, as is the case for many preventable infectious diseases, typhoid remains a problem in parts of the world with less developed public health infrastructure. On a global scale, medical and governmental responses to public health issues continue to exist in an uneasy tension with broader political and social concerns.

2 thoughts on ““The Pest at the Gate”: Typhoid, Sanitation, and Fear in NYC”