To celebrate National Poetry Month, we are sharing poems from our collection throughout April.

Anyone who has read a Jane Austen novel or seen an adaptation knows about taking the waters at Bath for medicinal benefit and societal gain. But Dr. Robert Bongout would not be considered decorous company for the genteel gentlemen and ladies in her works.

Bragg (not credited in print) describes the characters thus:

Pages 5 and 6 of The Journey of Dr. Robert Bongout and his Lady, to Bath. Click to enlarge.

Over the course of their trip, Dr. Bongout spends copious funds on enormous amounts of food behind his wife, Lady Bongout’s, back. At the same time, she attempts to convince him to save money and eat less, but to no avail.

An example of his gluttony: After agreeing to a light supper at his wife’s bidding, he makes the following request to a cook once she is out of sight:

“Friend cook, quoth he, (first half a crown

Pop’d in his hand) are there in town

Such things as ducklings to be got?

The price I value not a jot.”

“Sir, quoth the cook, I have not less

“Then, quoth the Doctor, if you please,

Stew half a dozen down with pease;

And when enough, where I shall lie,

He tucks in after his wife has gone to bed; half asleep, she stumbles upon him eating the stewed ducklings, thinks him a ghost, and faints (so true to life).

At first, it seems that Lady Bongout’s maladies—the real reason for the trip to Bath—are psychological effects of her many years of dealing with her husband. But soon after the Bongouts reach their destination, they take physical form. Her illness offers a satirical look into the services of physician and apothecary, who are “well-pleas’d to hear she was not dead; / Such welcome tidings cou’d but please, / (For what, alas! were one day’s fees).”

Pages 66-69 of The Journey of Dr. Robert Bongout and his Lady, to Bath. Click to enlarge.

Her maladies lead to blindness, which does nothing to slow her charming husband: “Then while she’s blind, I wou’d know why / I may not live in jollity” (78). Despite her lack of vision, she still suffers the knowledge of his ever-increasing girth: “For tho’ she could not with her eyes / Distinguish his enormous size; / Yet she cou’d feel to what a bulk / His worship had increas’d his hulk” (80).

Dr. Bongout himself goes through a medical crisis after eating “for dinner half a stone in weight” (93). Be warned, gentle readers: these verses are not for the faint of heart. 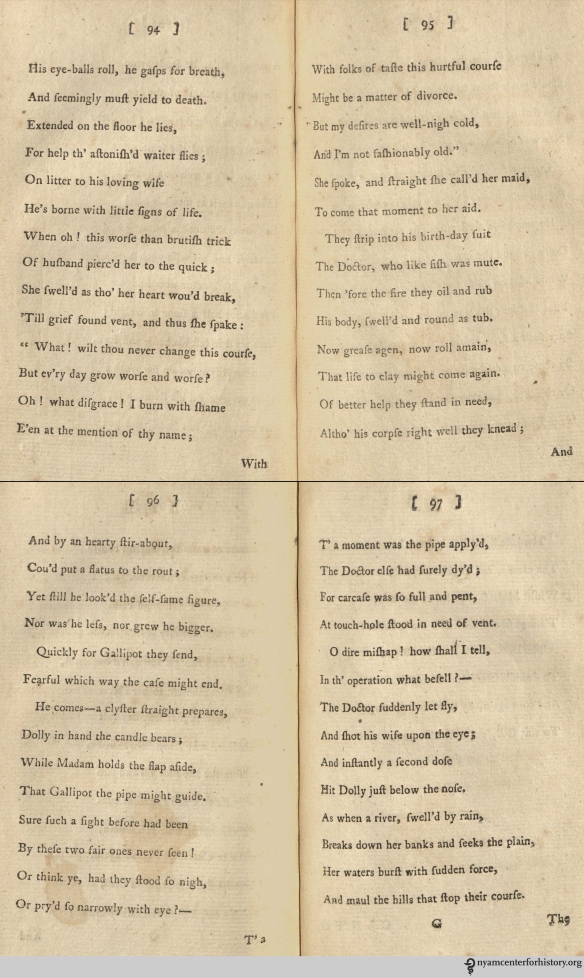 Pages 94-97 of The Journey of Dr. Robert Bongout and his Lady, to Bath. Click to enlarge.

Even this incident does nothing to slow Dr. Bongout’s appetite. At the end of the poem, news of his imminent departure from Bath brings tears to the eyes of the local pastry chef and causes him profound worry about the future of his business:

“To lose of customers the chief

Was matter of the greatest grief:

Quoth he, “And must you then depart?

The very thought will break my heart!

But if you must—I cannot stay—

The Journey of Dr. Robert Bongout and his Lady is part of a larger tradition of satirical writings related to gout (though Bragg only refers to Dr. Bongout’s condition through the character’s name). Perhaps because gout was a disease of the wealthy, its merits “have been extolled over the centuries by physicians and laypersons. In the past, gout was regarded as a badge of nobility, a talisman against other afflictions and an aphrodisiac, and these beliefs were preserved in 16th-to 18th-century literature.”2 In addition, writers often approached the painful disease with humor. “Gout was…a diverting disease,” one that inspired new uses of language and playfully coined words.3

Bragg’s playful look at gluttony does not end with a moral, only the expectation that Dr. Bongout’s enormous gut will continue its expansion. Nor does it seem that his gluttony will have tragic consequences, only humorous ones. Clearly, he’s called Dr. Good Gout for a reason.