“After [John] Hunter’s death, his great rambling mansion, three blocks thrown into one, passed through many hands. Till 1806 the Museum was still filled with his collection. … And there is a tradition that Stevenson drew from them his picture of the house and museum of Dr. Jekyll.” (Paget 1897, 155)1

Author Robert Louis Stevenson’s description of Dr. Jekyll’s fictional residence caused some of his contemporaries to suspect that he had used the real home and museum of the pioneering 18th-century Scottish surgeon John Hunter as a model; whether or not this was really the case is up for debate. 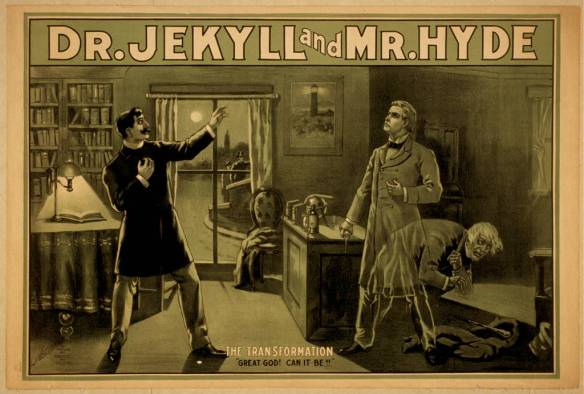 Stevenson did not mention Hunter in any of his notes. Yet the rumor became so widespread that Stephen Paget casually referred to the “tradition” in his 1897 biography of John Hunter.2 Speculation continues well into the 21st century.3 We may never know for sure if Dr. Jekyll and Mr. Hunter both lived at No. 28, Leicester Square, but we can get a sense of what the residence looked like thanks to one of the few surviving design plans, in the library’s collection.

Pencil copy of William Clift’s drawing of the “Ground plan of Mr. Hunter’s Premises level with Street, or Parlour-Floor level.” Click to enlarge.

Much of what we know about Hunter’s Leicester Square residence comes from a ground floor plan reproduced from memory by William Clift, Hunter’s assistant and the first conservator of the Hunter Museum. Clift was born 1775 in Bodmin, a town in Cornwall, England. He had a difficult upbringing. He lost his father, Robert Clift, at a very young age. According to Clift, his mother Joanna Courts occasionally “starved herself to save threepence a week” in order educate her son. She died when Clift was eight, leaving him “cast adrift on the wide wide world.”4 He eventually found work under a nurseryman named George King, a man given to occasional brandy-fueled outbursts. Out of the blue one day, an inebriated King chased Clift through the nursery. Clift managed to escape despite that fact that his pursuer was riding a horse. Clift drew a caricature of the incident sometime later and used it to entertain his coworkers. King became aware of the drawing and fired Clift.

Luckily, Nancy Gilbert of Priory, Bodmin became aware of Clift’s circumstance. Gilbert was a childhood friend of Anne Home, whom Hunter had married in 1771. Gilbert knew that the surgeon needed a new assistant and recommended Clift to Hunter, who gave him the job. On February 14, 1792, his and Hunter’s birthday, Clift arrived at the Leicester Square residence. In addition to the clothes on his back, he had only “four changes of shirts and neckcloths” to his name.4

Hunter was an accomplished anatomist, surgeon, lecturer, and a pioneer of evidence-based medicine.  During his lifetime, Hunter developed new methods for treating gunshot wounds and venereal disease. He stressed experimental research and encouraged his students to pay close attention to the way that the human body responded damage. Because of that approach, Hunter is now known as the pioneer of “scientific surgery.” He was also an avid collector of animal and plant specimens. His museum contained approximately 14,000 preparations of more than 500 different species.5

John Hunter, “engraved by W. O. Geller from the original picture by Sir Joshua Reynolds in the Royal College of Surgeons,” 1836.

Clift worked for Hunter for less than two years, but the days were full. Each morning, Clift assisted with dissection and the preparation of specimens for display. He put his  penmanship to use each evening when Hunter required he take dictation, copy his employer’s nearly illegible notes, and answer personal correspondence. The sudden death of Hunter on October 16, 1793 threatened to cast Clift adrift once more. Although Hunter’s income was steady and substantial, he borrowed from creditors to keep a ready supply of cash to cover household expenditures. Following his death, Mrs. Hunter left the house and rented out her room. She allowed only Clift and Elizabeth Adams, who worked as the Hunter’s housekeeper, to remain on staff. Clift was to look after the museum for a salary of £21 a year.6

Recognizing the intellectual value of Hunter’s manuscripts and collection of specimens, Clift set himself to the task of preserving them. He copied by hand nearly half of Hunter’s manuscripts. He also cared for the specimens in Hunter’s museum. Clift dutifully and quietly carried on for six years. His efforts were rewarded when the British government bought the collection in 1799 and transferred its care to the Royal College of Surgeons. A board of curators assembled by the RCS appointed Clift the official conservator of the museum. During his time as conservator, Clift cared for the physical condition of the collection and maintained its original order.7

Clift oversaw the Hunter Collection for the next 42 years, during which time the RCS transferred the materials from Leicester Square to a new building near Lincoln’s Inn Fields. Late one night after the move, as his time as conservator was coming to an end, Clift drafted the ground floor plan that we have today.8 Simon Chaplin, director of culture & society of the Wellcome Trust, has conducted extensive research into Hunter and the Leicester Street house and considers the drawing to be fairly accurate.9 Given that no complete plan exists for the Leicester Square property for the time when the Hunters lived there, Clift’s plan remains one of the best representations that we have today.

“Ground Plan of Mr. Hunter’s Premisis, level with Street or Parlour-Floor level.” Copied from original in Royal College of Surgeons. Click to enlarge.

Scholars typically describe the Leicester Square property as made up of two separate buildings that were originally separate structures. However, it may be helpful to think of the property as composed of four structures. There were two main buildings. Twenty-eight Leicester Square faced west. Thirteen Castle Street faced east. Situated between the two main buildings were two smaller structures. One building contained Hunter’s picture gallery. The other contained his “conversatione room,” lecture theater, and museum. The second and third floors of the Leicester Square building contained the Hunters’ private rooms. Mr. and Mrs. Hunter conducted many of their public affairs on the ground floor. It was there that Anne Home, a well-educated poet with connections in London’s literary and artistic scene, entertained guests. The Castle Street (now Charing Cross Road) building contained Hunter’s dissecting room, preparations room, a dining room for students, and a room for housekeeper Elizabeth Adams.10

A guide to the Fenwick Beekman Collection of images is now available online here. Before I discovered who Beekman was, the images collected appeared to have been randomly assembled. Biographical research revealed that Beekman was the foremost private collector of material related to 18th-century Scottish physician John Hunter. Beekman spent years researching and writing about him. When Beekman donated his Hunterian collection in 1960 it was considered the best in private hands. Only the Royal College of Surgeons could boast of a superior collection of Hunter-related materials. It is thanks to Beekman that the New York Academy of Medicine came to own a copy of Clift’s ground plan, along with the other items related to Hunter. After researching Beekman, I began looking into the history of each item in the collection. Thematically, the images reflect the diverse interests of Beekman and Hunter. In addition to the various images, there are several handwritten letters by Hunter that shed light on the early days of his career. I came away from the collection informed and entertained. I have no doubt others will as well.