New York physicians Henry W. and Albert A. Berg are well-known to students of literature. In 1940, Albert A. Berg founded the New York Public Library’s spectacular Berg Collection, endowed in his older brother Henry’s memory. It is a magical place, nestled on the third floor of NYPL’s Steven A. Schwarzman building, with endlessly deep collections in its vaults (I should know, I was lucky enough to work there). Highlights include a typescript draft of T.S. Eliot’s The Wasteland, annotated by Ezra Pound; the manuscript notebooks containing five of Virginia Woolf’s seven novels; and a map drawn by Jack Kerouac of territory covered on the cross-country trip that inspired On The Road. 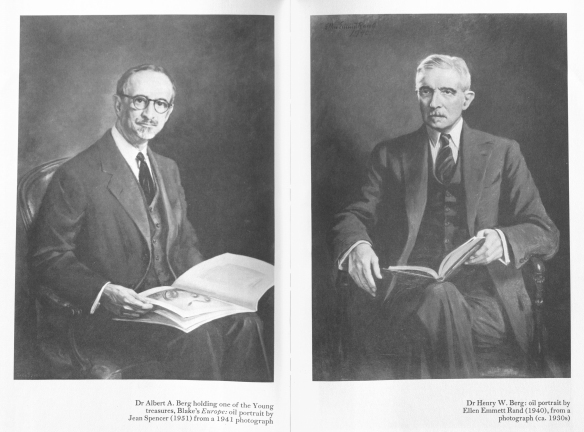 Fourteen years separated the eldest and youngest Berg siblings, but they had much in common, including interests in book collecting and literature, along with an aptitude for real estate investment (a pastime that funded their library interests). The two doctors lived together until Henry’s death in 1939 in a townhouse on East 73rd Street. The story of Henry and Albert Berg’s establishment of one of the world’s great literary collections is told in Lola Szladits’ excellent book, The Brothers.

The medical legacy of the brothers, both prominent New York doctors, is less widely known. Henry and Albert’s father, Moritz Berg, immigrated to America from Hungary in 1862 with designs to work as a doctor. He found work instead as a tailor to support his family of eight children. Moritz died of cancer when Albert was young, and Henry, already interested in medicine himself, determined that Albert should follow the same career path.1 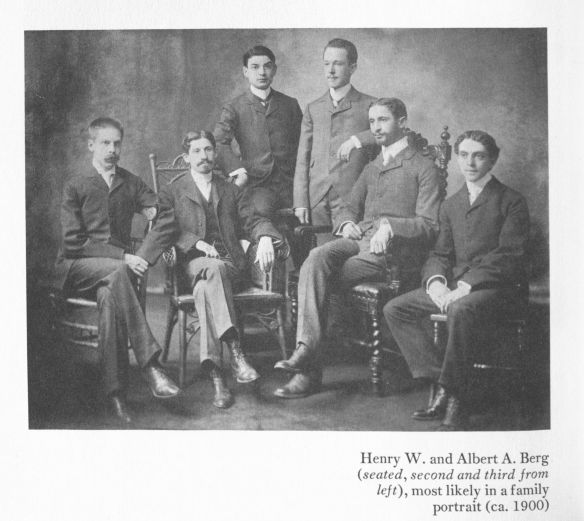 Henry earned his medical degree from Columbia University’s College of Physicians and Surgeons in 1878, specialized in infectious disease, and headed Mount Sinai’s isolation service. He taught both neurology and pediatrics at the College of Physicians and Surgeons.2 Henry was attending physician at Willard Parker Hospital on East 16th Street for 40 years, until his death in 1939.3 His active role on Willard Parker’s board is documented in the Academy’s collection of Willard Parker minute books.

It was Henry who mentored Albert, put him through medical school, and showed him he could be a great doctor. All early indications were to the contrary: Albert repeatedly ditched class to play pool. Their mother was skeptical that Henry could ever make a doctor out of him.4 But by graduation (also from College of Physicians and Surgeons), Albert was a decorated prizewinner.5 And as a surgeon, he proved a brilliant and visionary pioneer, a key player in the development of abdominal surgery in the United States.

Albert A. Berg as a young doctor (seated, second from left). In Szladits, Brothers: The Origins of the Henry W. and Albert A. Berg Collection,1985, page 37.

Albert’s exceptional skill as a surgeon is attested in a tribute article by Dr. Leon Ginzberg in a festschrift volume of the Journal of the Mount Sinai Hospital devoted to Albert’s career:

[Dr. Berg’s] tremendous capacity for work, his boldness and resolution, his extraordinary operative skill and his refusal to remain on the accepted path, had brought his service to an enviable position in the field of abdominal surgery. The most significant studies from his clinic were in the fields of gastroduodenal and jejunal ulcers. Other important contributions were made to the subjects of colonic, and more particularly rectal and recto-sigmoidal carcinoma….to chronicle adequately all of Dr. Berg’s ‘labors in the vineyard’ would be to write an important chapter in the history of the development of abdominal surgery in the United States.6 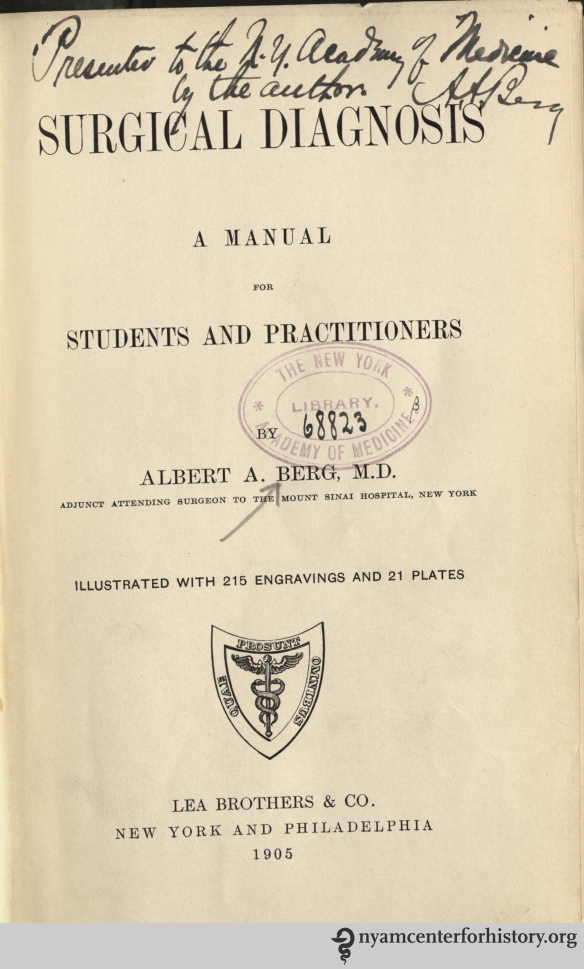 Title page of Alfred A. Berg’s Surgical Diagnosis, 1905, given by the author to the New York Academy of Medicine Library.

Albert’s skill and personal style made him one of New York’s most recognizable doctors by the 1920s. In physical appearance he was “six feet tall, slender, and forbidding.”7 Katie Loucheim’s remembrance in the New Yorker compares his appearance to an “esteemed rabbi…with a Vandyke beard…his manner in speaking and his voice were reassuring.”8 He wore a red carnation in his lapel, even during surgery, until the death of his brother in 1939.9

Albert—or A.A. as his medical friends called him—observed an almost fanatical devotion to the operating room. Loucheim reports that Albert regularly scheduled surgery for a few minutes before midnight on New Year’s Eve, believing that if he began the new year in surgery he could secure for himself a happy year. Berg’s dexterity as a surgeon ensured that he could easily converse about rare books while operating on patients, including his friend, the great book collector Carl Pforzheimer. Seven days a week, the Fifth Avenue bus—“Berg’s green taxi” to his colleagues, dropped him halfway down the block in front of the canopy of Mount Sinai. Other passengers complained because it wasn’t an actual bus stop (in turn, the conductors and bus drivers relied on Berg for any surgical needs).10

Mount Sinai Hospital, circa 1913. From The Dr. Robert Matz Collection of Medical Postcards.

A stone’s throw away from A.A. Berg’s beloved Guggenheim pavilion at Mount Sinai Hospital, the Berg name lives on. On the third floor of the New York Academy of Medicine in the former periodicals room is a bronze plaque commemorating the gifts of Drs. Henry W. and Albert A. Berg to the Academy. A bequest from Albert endowed the third floor room that bears their name and still supports the acquisition of library periodicals today. Both brothers were Academy Fellows (Henry beginning in 1890, Albert in 1900).

Albert seems to have recognized how vital a good set of tools were to students of surgery. A copy of his last will and testament in the Academy’s archives entrusts his surgical instruments, instrument bags, and laboratory equipment, including two microscopes and examination tables and one portable operating table, to “one or more deserving young surgeons” to be selected at the Academy’s discretion.11 The items are no longer at the Academy; perhaps they were also used by a student whose path to medicine was at first uncertain, but later found his or her way.

New York Times article from July 18, 1950 announcing Albert A. Berg’s bequests, including to the New York Public Library and the New York Academy of Medicine. Click to enlarge.