Ken Albala is Professor of History and Director of Food Studies at the University of the Pacific. He is the author or editor of 24 books on food. He conducted his dissertation research primarily at the New York Academy of Medicine. Dr. Albala will present Aphrodisiacs: The Intimate Connection Between Food and Sex in Renaissance Nutritional Theory and lead the workshop “Hands On” Early Modern Cooking at our Eating Through Time Festival on October 17.

As a scholar sometimes you have ideas that get orphaned that you come back to after many years, very randomly. Such was a paper I first delivered at a Northern California Renaissance conference in 1995 on aphrodisiacs in medical literature. In truth, I had intended to fit the topic into my dissertation and it never made it in. The paper was a way to make use of the pile of notes I had taken at the New York Academy of Medicine just a few years before. And when I say a pile of notes, I mean an entire filing cabinet full of handwritten notes taken in pencil and coded with colored crayons. There was no such thing as a laptop then.

A page of Ken Albala’s notes.

These notes cover about 100 books I read at the Academy between 1989 and 1993, practically every dietary text written in Europe between the mid-15th and the mid-17th century. I was a permanent fixture in what was then called the Malloch Room, now the Drs. Barry and Bobbi Coller Rare Book Reading Room. The notes became my dissertation at Columbia University and eventually morphed into my first book Eating Right in the Renaissance (UC Press, 2002). While I always kept an active interest in the history of medicine, my career since then has shifted far more toward culinary history and broader food history. Every now and then I deliver a paper or write an article involving food and medicine, and I still teach a history of medicine course, but I had completely forgotten about the topic of aphrodisiacs. In jest I have often said it would be a really interesting topic for experiential research. Alan Davidson, the late author of the Oxford Companion to food, encouraged me many times to write a serious book on aphrodisiacs, but it never came to pass.

What surprise then, when this past spring, two decades after first giving that paper, I was asked to speak in Miami on aphrodisiacs. I thought, OK, I will just go into my computer and find that paper. No evidence of it. I realized that when I wrote that paper I was still learning to type, had just sent my first email, and had still written out everything by hand. So I needed to dig through the filing cabinets to find the original paper. Then to revise and update it using my original trove of notes taken 25 years earlier. Happily the paper was a success. I also delivered it in Dublin a few weeks later, and then a publisher contacted me asking if I would like to write a book on aphrodisiacs. I think I probably will. Isn’t it funny how every stray idea eventually finds a good home?

The most remarkable thing about the whole experience is that I can still hear the voices of early modern authors after all these years. I can still quote them in half a dozen languages. From the French version of Platina printed in 1507 there is “L’heure que tu sentiras ta viande estre cuite, car…l’heure est bonne pour engendrer enfans…”  (The moment you feel that your meal is digested, the time is good to produce children.) Or Girolamo Manfredi from 1474 “Imperho dicono li philosophi che chi usa molto il cohito vive poco e tosto invechia.” (Therefore philosophers say whoever has a lot of sex lives a short life and ages too soon.) Or there’s Baldassare Pisanelli who tells us that 4 drams of cloves in milk “aumento mirabilmente le forze di Venere” (greatly increase the power of Venus.) There’s also the Fleming Hugo Fridaevallis who tells us that asparagus is great for timid newlyweds “primas coniugii difficultates, et si quid minis in uxore tunc placet, dulce et amabile futurum tandem uxoris contubernium” (whoever…has conjugal difficulties at first, and if you are unable to please your wife, later she will be a sweet and loving mate). 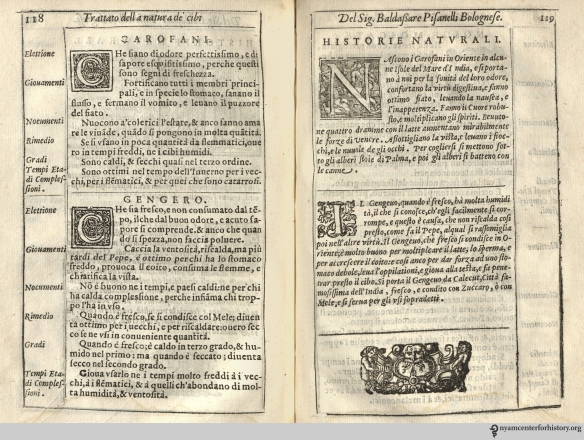 Their opinions are of course very amusing, but they also give us some remarkable insights into the kinds of problems Renaissance people would have taken to their physicians. These kind of frank open discussions of sex gradually become rarer in the 16th century, no doubt under the influence of the Reformations a kind of prudery pervades the later dietaries. It took another few centuries until they discuss the topic again, in the 19th century, but all this is the subject for a book. Stay tuned.