Annette Smith Burgess (1899-1962), was another of Brödel’s students.  Burgess studied with Brödel for three years starting in 1923 before becoming the first ophthalmic illustrator for the Wilmer Eye Institute, a position she held for the next 35 years, until her retirement in 1961.  Beginning in 1946 (and more officially in 1948), she took on an additional role as an instructor in the Art as Applied to Medicine program.

In 1934, William Holland Wilmer published his Atlas Fundus Oculi, illustrated with one hundred color plates, all of which were reproduced from paintings made by Burgess.  These lushly colored lithographs took quite a bit of work to make.  As Wilmer states in his foreword to the atlas, “The accurate printing of fundus drawings in colour is a very laborious and costly undertaking; sometimes in offset-lithography from eight to sixteen impressions (one mat for every colour) are required to produce one plate.  The cheaper processes are far from satisfactory…”[2]

Burgess was more than qualified to take on this challenge.  To make her paintings, she became a skilled user of the ophthalmoscope and the slit lamp.  Writing about the process by which she created her illustrations, Dr Alan C. Woods explained that to show the ocular lesions related to a particular disease “she would make six drawings from different eyes depicting the various lesions and gradations thereof, rather than paint and sign her name to any drawing which was not a faithful portrayal of the lesions actually present in the eye under study.”[3]  This meticulous work increased the value of the illustrations for users of the atlas, as their level of accuracy was extraordinary, rendering the experience of looking at the illustrations very close to that of looking through an ophthalmoscope itself.  Some of Wilmer’s descriptions also include detailed half-tone illustrations of particular features he wanted to highlight; these, too, were drawn by Burgess.

Burgess also collaborated with Woods, providing the illustrations for Endogenous Uveitis (1956) and Endogenous Inflammations of the Uveal Tract (1961), although in both of those volumes her paintings were reproduced using photographic processes rather than lithography, and reduced in size.  While still extraordinarily beautiful, the texture found in the earlier lithographs disappears in the reproductions in these later publications. 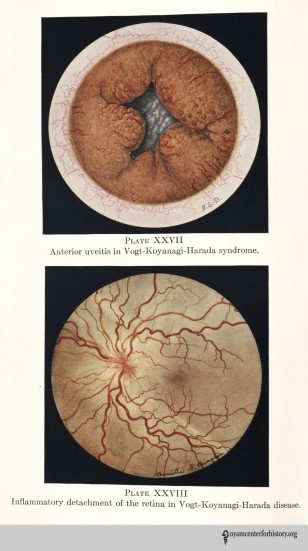 For decades after her death, the Department of Art as Applied to Medicine at Hopkins continued to celebrate Annette Burgess’s legacy with an award to honor excellence in ophthalmological illustration.