Early European anatomical lift-the-flap books made use of technologies available during the 16th century: woodcut and engraving, combined with manual cutting and pasting.1 Flap anatomies like Geminus’ Compendiosa (1559) allowed readers to peel away the layers of the body to reveal different organs, but these flaps were made of paper and opaque, and didn’t allow the reader to view the strata of the body simultaneously.

Fast forward four centuries, when an innovation in printing technology let readers take a deep dive through the layers of the body all at once.

Anatomical illustrators used transparencies to show the layers of the body as early as the 1920s. J.E. Cheesman published Baillière’s Synthetic Anatomy, a series of 14 booklets, in London from 1926 to 1936. The series used a set of glassine sheets to show what lay beneath the surface of the skin.

In 1942, Richard Lasker patented a new printing process for Milprint Inc., a Milwaukee-based company. He called this new method trans-vision. Trans-vision allowed for the printing of images on the inner surfaces of folded sheets of transparent acetate. These sheets could then be piled on top of one another so that they overlapped, enabling a multi-layered view with the top sheets depicting the most superficial layers of an object and the bottom sheets the deepest level.2

The patent application for Lasker’s trans-vision process used a cutaway illustration of a mattress, with different layers of acetate offering views of the mattress’ filling.3 Trans-vision’s medical applications proved significantly more useful: it made possible the representation of complex anatomical relationships to health professionals and public audiences alike.

In 1943, Peter C. Kronfeld, an ophthalmology professor at the University of Illinois, published The Human Eye in Anatomical Transparencies. The book contains 34 color anatomical paintings printed using trans-vision.4 Each page offers a frontal and temporal view of the eye and its area, with transparent layers that can be peeled away by turning the pages. The paintings are printed on the inner side of the acetate to minimize damage from handling. The parts of the eye are numbered. Readers can use a bookmark key laid-in to identify the different parts by name.5

Figure 1 in Kronfeld, The Human Eye in Anatomical Transparencies, 1943. Click to enlarge.

Kronfeld describes the project in The Human Eye’s preface:

It was at once obvious that the eye could advantageously be represented by this means, for it is a three-dimensional object in which great structural intricacy is combined with relatively small size. Ordinary drawings of its separate parts tend to isolate them too much from each other in the mind of the observer….The text has been so organized as to present not only a systematic account of ocular anatomy—taking up the various structures in a functionally logical order—but also a topographic treatment of the anatomy…which necessarily reveal the structures layer by layer in an order determined somewhat by the layers of dissection techniques.6

The paintings were made at twice the actual size by Gladys McHugh, an illustrator at the University of Chicago. The pioneering medical illustrator Max Brödel had been McHugh’s teacher and mentor at Johns Hopkins University, where she studied. It was Brödel who influenced McHugh to make her own dissections.

Figure 2 in Kronfeld, The Human Eye in Anatomical Transparencies, 1943. Click to enlarge.

McHugh augmented her dissections of human eyes with specimens from pigs and monkeys. She describes her extensive dissection work in her introduction:

Over a course of time I obtained from baby autopsies ten good cases, making a total of twenty eyes and orbits. These I dissected layer by layer, making color notes and drawings from the fresh specimens. To develop a technique for separating the layers of the eyeball as intact semispheres, pigs’ eyes were employed. Also, to supplement my observation of the muscles and other structures not fully developed in the infant, monkey orbits were dissected.

As Professor Shelley Wall has argued, turning the pages in The Human Eye mimics the dissection process. As the layers on the recto side of the book are more deeply revealed with each page turn, the layers build on the opposite verso, allowing for the eye’s reconstruction.7 With The Human Eye, the union of format, technology, and material is harmoniously in sync. 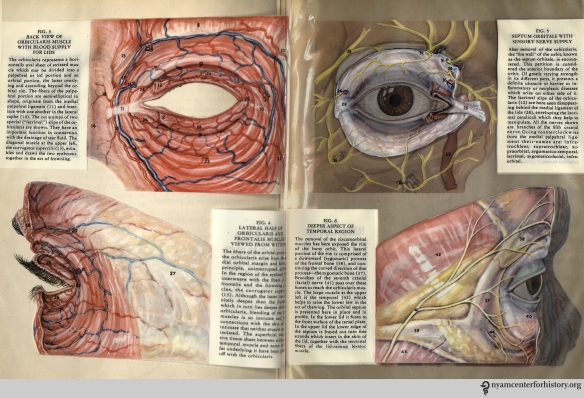 Figues 3-6 in Kronfeld, The Human Eye in Anatomical Transparencies, 1943. Click to enlarge. 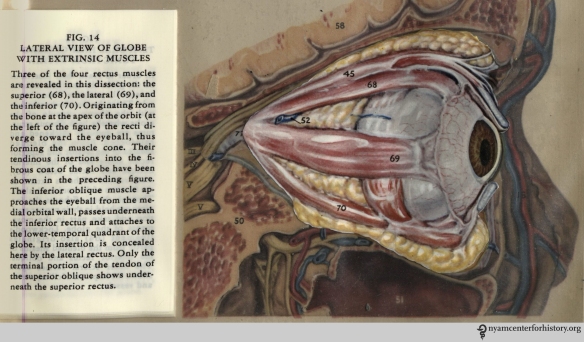 Figure 14 in Kronfeld, The Human Eye in Anatomical Transparencies, 1943. Click to enlarge. 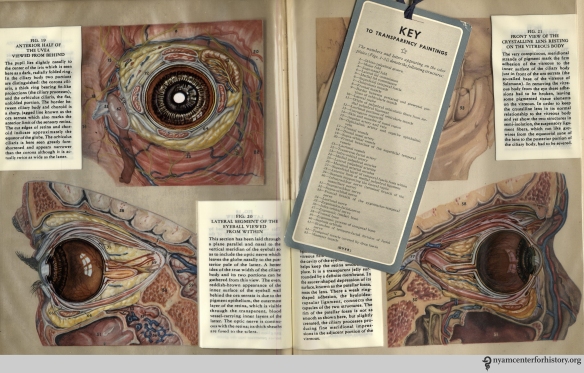 Figures 19-22 with bookmark key in Kronfeld, The Human Eye in Anatomical Transparencies, 1943. Click to enlarge.

By 1958, the book had enjoyed five editions.8 Students and educators embraced the text and its ingenious illustrations. In 1946, the trans-vision process was applied again to McHugh’s paintings in for The Human Ear in Anatomical Transparencies. Initially conceived as a wartime project useful to the aviation industry, the book’s value, as with The Human Eye, was in its power to demonstrate to both lay and specialized audiences the inner workings of organs not easily seen.

The finest examples of trans-vision printing occurred when the coffers of the pharmaceutical companies who published them were at their fullest. After The Human Eye and The Human Ear, medical illustrator Ernest Beck used trans-vision technology to produce more than 30 anatomical transparency projects published by Milprint for encyclopedias, pharmaceutical companies and other commercial concerns.9 A decade after Kronfeld, Ciba Pharmaceuticals published a 13-volume collection of anatomical illustrations using anatomical transparencies between 1953 and 1989. The illustrator of these, was a native New Yorker, fellow of the Academy, and former member of the Art Students League of New York. His name was Frank Netter.10

1. For more on this, see Andrea Carlino’s excellent Paper bodies: A catalogue of anatomical fugitive sheets, 1538-1687.

9. Brierley, Meghan. Dialogue and Dissemination: The Social Practices of Medical Illustrators in the Pharmaceutical Context. Dissertation, University of Alberta. 2013. Accessed online May 31, 1916.

10. Frank Netter was the most prolific medical illustrator of the twentieth-century. During his more than sixty-years as a medical illustrator he produced more than 4,000 illustrations of the entire anatomic and pathologic character of the human body, system by system. His comprehensive and detailed illustrations, published in The Ciba Collection of Medical Illustrations, Clinical Symposia, and The Atlas of Human Anatomy educated generations of medical professionals and students all over the world.