You’ve probably seen the star of today’s post. Or, rather, peered at it trying to see it clearly (like yours truly). That pyramid of big letters with subsequent lines of more letters getting smaller and smaller: the eye chart.

The relationship of the distance at which the test is done and the distance as which the smallest figure is (correctly) identifiable defines the patient’s visual acuity. Source: John Weiss & Son (1898).

The German physician Heinrich Kuchler created the first eye chart in 1836 with cuttings from books, papers, and almanacs that he glued to a sheet in ever decreasing size.

While Kuchler’s example above is not as cleanly designed as this post’s first image, it was a definite improvement over times past. People basically had to self-diagnose themselves or read a piece of text with a doctor and pick the (hopefully) correct lenses. By the nineteenth century, the need for individualized lenses was clear. In 1862 Dr. Franciscus Donders asked his colleague (and eventual successor to the directorship of the Netherlands Hospital for Eye Patients), ophthalmologist Herman Snellen to design a chart.[1] Now called the Snellen chart, it has become one of the most common.

According to Smith-Ketterwell Eye Research Institute scientist and an eye chart design expert, Dr. August Colenbrander, Snellen experimented with dingbats, shapes and even lines of text for the eye chart.[2] But patients could assume the ending of phrases based on context, and symbols were hard to describe. So Snellen stuck to letter forms –but do they look a little odd to you?

To the right of the above Snellen Chart is an E Chart, sometimes called a Tumbling E Chart, which works along the same principles but is used for those who cannot read, like children, or patients unfamiliar with the Latin alphabet. Source: Reynders, John, & Co. (1889)

If your answer is yes, you’re picking up on the fact that Snellen developed a specific kind of letterform called an optotype. Once he concluded that letters were better for vision, he speculated that subjects would identify equally weighted letters of consistent size more easily. So he created a complete typeface in a grid system.

Typical typefaces have different line thicknesses and ornamental touches (like the dot on lowercase i’s, the cross-stroke of T’s).  Letter proportionality is usually determined by family groupings (like h, m, n, r, and u). Snellen developed a 5 x 5 grid for his optotypes so the width and height of an optotype is five times the thickness of the line weight.[3] Snellen based his grid on a medical measurement, the arcminute, or one sixtieth of a degree.[4] In optotypes, the weight of a line is equal to the negative space between lines. Typically, C and D would appear wider than Z. The opposite is true of optotypes.

Snellen isn’t the only game in eye chart town. Others include the Jaeger chart, Landolt C, LEA test, LogMAR charts and the Golovin-Sivtsev table. Retired eye surgeon and antique eye glasses expert David Fleishman attributes the Snellen’s widespread popularity even after the advent of other vision assessments to it’s being a “low-tech solution to a complex problem because it was cheap and easy to use.”[5] The 21st century is making its own easy to use -if high-tech solutions– such as the newly released Warby Parker Prescription Check app which utilizes a user’s laptop and iphone to check their vision. The app allows an eye doctor to assess your prescription; though the app stresses it does not replace a comprehensive eye exam. 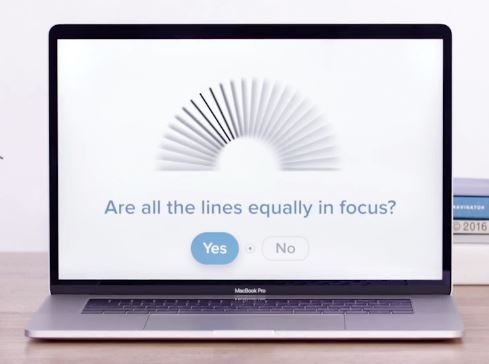 Whatever computer screens hold for the future of vision checks, the Snellen remains one of the top selling posters in the United States.[6]

Special thanks to Avery Trufelman and the 99 Percent Invisible podcast team for inspiration from Episode 242: Mini-Stories: Volume 2.