The Academy Library is thrilled to announce “Facendo Il Libro: The Making of Fasciculus Medicinae, an Early Printed Anatomy.”  This online exhibit, focused on an astonishing and influential medical book first published in Italy in 1491, was made possible through the generous support of the Gladys Krieble Delmas Foundation.

Originally collected in manuscript form, the Fasciculus Medicinae (the “little bundle of medicine”) is a richly illustrated collection of medical treatises on uroscopy, phlebotomy, anatomy, surgery, and gynecology.  The Fasciculus Medicinae was first published in 1491, but demand for it made it a favorite text for printers. By 1522, it had been issued more than twenty times.  Variations in the text and the illustrations through time show the early modern tension between medieval medical ideas and advances in medical understanding forged at the beginning of the 16th century.  The exhibit allows visitors to browse full-text scans of all five editions (1495–1522) in The New York Academy of Medicine’s collections; to investigate each edition’s exquisitely illustrated woodcuts and to explore their cultural and medical meanings; and to compare the books’ illustrations in different editions over time.  The site includes contributed essays from Dr. Taylor McCall, art historian of material culture and medieval medicine at the Walters Art Gallery, Baltimore, and from Dr. Natalie Lussey Seale of the University of Edinburgh, whose work focuses on early modern Venetian print culture.  Dr. McCall’s essay looks at the creation of the text and its accompanying illustrations, while Dr. Seale’s essay offers a window into Venetian printing processes in the 16th century and describes the making of a book in early modern Italy. 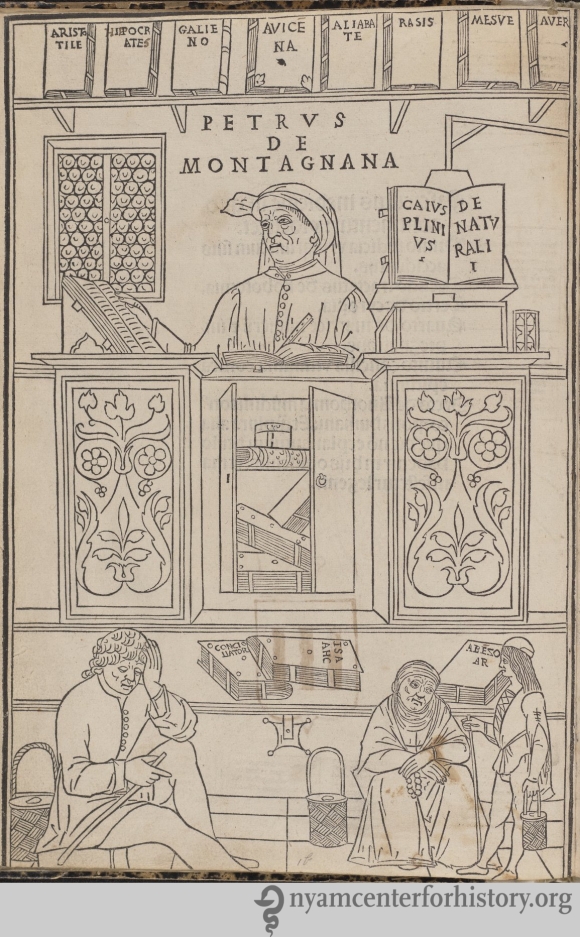 The illustrations of the Fasciculus Medicinae offer an intriguing glimpse of medical practice in the 16th century.  The book’s woodcuts include narrative scenes depicting the earliest Western depiction of dissection in print, an early illustration of a diagnostic consultation showing a professor analyzing a urine flask, and a physician, holding an aromatic sponge to his nose to avoid infection, attending a sick plague patient confined to his bed.  Other woodcuts help us to understand early modern conceptions of health and illness.  The Fasciculus Medicinae’s female anatomical figure captures late medieval ideas about women’s bodies, reproduction, and pregnancy.  A “Wound Figure” graphically depicts the various threats to the body, from blows to the head down to the prick of a thorn on the feet.  Perhaps most surprising of all, the Fasciculus Medicinae’s “Zodiac Figure,” who balances all twelve zodiac signs on his body, conveys the powerful role the stars and planets played in health in the medieval imagination.  This figure, who dates to earlier manuscripts from the medieval period, survives well into the twentieth century, appearing alongside horoscopes in a modified form in print in American almanacs produced by pharmaceutical companies. 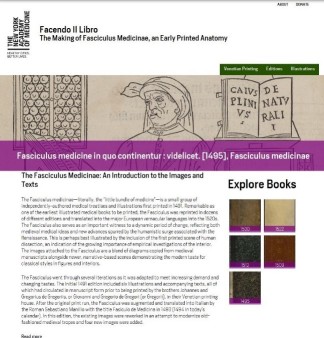 The Facendo Il Libro website has a simple design, but a complex structure.  It is both a standalone digital collection and an online exhibit built using Islandora, an open-source digital repository framework.  Representing the first full-text internal digitization project for the Academy Library, the five editions of the Fasciculus Medicinae were digitized in the Library’s Digital Lab. The online exhibit was built using an Islandora multi-site to leverage the digital collection repository (Fedora), Drupal Book module, and the current Library branding theme.

The ability to draw from the common repository made it possible to store content once and use it in multiple ways.  Thus, the five digitized editions are available in two different places using a single source.  The built-in navigational structure for the exhibit makes it easy for users to explore the collection in a linear fashion or by sections. 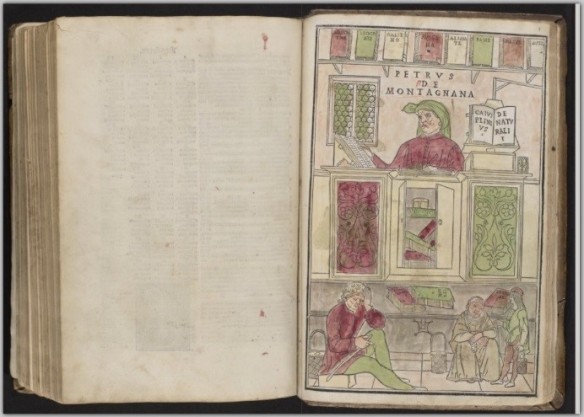 Replicating the physical experience of touching the text is still a challenge for digital projects.  Thus, it was important to create a digital experience that provides the user with some sense of the materiality of the object. For example, the 1500 edition was bound with another text (Savonarola’s Practica medicinae), which is evident from the first digital image of the book. The image shows the thickness of the text and the fact that the 1500 edition begins in middle of the physical object. It shows the user exactly what will be encountered when using the physical item.  It also highlights a significant piece of information that could have been lost due to cropping.

Another important aspect of the online exhibit is the illustrations page, where users can see all the illustrations from all editions in one place.  When a user clicks on an illustration, the user is immediately taken to a page with descriptions of each illustration as it appears in each edition.  To explore the images, users can click on an image and zoom in to see the intricate details.