By Robin Naughton, Head of Digital

The New York Academy of Medicine Library began in 1847 with the intention of serving the Academy fellows, but in 1878, after the collection had expanded to include over 6,000 volumes, Academy President Samuel Purple and the Council voted to open the Library to the public.  It continues to serve both the Academy fellows and the general public, providing an unprecedented level of access to a private medical collection.  Today, the Academy Library is one of the most significant historical libraries in the history of medicine and public health in the world.

The Academy Library’s history spans almost 170 years and a glimpse into this history is documented in this interactive timeline. While the timeline does not represent everything that has occurred in the Library, notable milestones can be seen here. The story starts with the founding of the Library on January 13,1847, with a gift from Isaac Wood of Martyn Payne’s Medical and Physiological Commentaries and continues forward to the recent renovation and naming of the Drs. Barry and Bobbi Coller Rare Book Reading Room.

Academy’s First Permanent Home: In 1875, the Academy purchased and moved into its first permanent home at 12 west 31st Street. This image of the Academy’s first building will take you back to a different time. 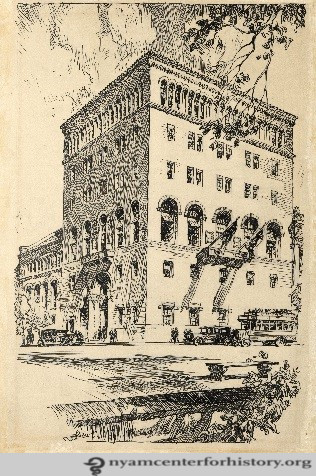 Academy’s Current Home: In 1926, the Academy moved to its current location on 103rd Street and 5th Avenue. The architectural firm York & Sawyer designed the building.  A 1932 expansion added three new floors on the northeast side of the original structure above the existing floors.  Today, you can visit the Academy at this location and explore the historic building.

Cookery Collection: In 1929, Margaret Barclay Wilson gave the Academy her collection of books on food and cookery, which includes a 9th-century manuscript (De re culinaria) attributed to Apicius, and sometimes referred to as the oldest cookbook in the West. 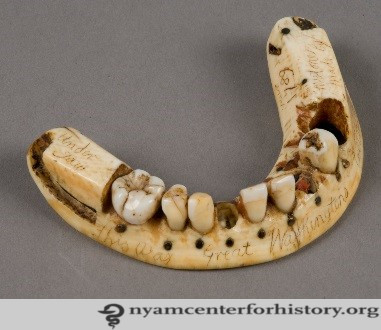 George Washington’s Teeth:  Yes, that’s right!  In the spring of 1937, the descendants of John Greenwood gave the Academy the lower denture created by New York dentist John Greenwood for Washington in 1789. The denture is just one of the artifacts that the Library owns.

Honored Librarians: In 1974, the Academy honored Gertrude L. Annan and Janet Doe, long-time librarians for their contributions to the Library.

There are many more highlights in the timeline so click through and enjoy.

The Academy Library timeline was created using Northwestern University’s Knight Lab open-source timeline tool called TimelineJS. The tool was released under the Mozilla Public License (MPL), making it possible for anyone to create timelines to embed and share publicly.

TimelineJS is an easy tool to create a timeline with just a few steps. Here are some things to keep in mind when creating a timeline:

It’s important to have content ready prior to creating the timeline.  For the Academy Library timeline, there was already a text version of the timeline that could be used to create the interactive timeline. Together Arlene Shaner, Historical Collections Librarian and I edited, updated and added images to the timeline. Starting with some content allowed us to devote time to enhancing the timeline by finding and adding associated images.

It is important that the media resources used in the timeline are publicly available.  TimelineJS uses URLs to access and display the media files (images, videos, maps, Wikipedia entries, Twitter, etc.). Thus, items behind firewalls or logins will not be accessible to the public. Make sure to upload images to a publicly available server and use that URL for the timeline.

Google Sheets: Add all content and links into spreadsheet and publish

To get started, the TimelineJS template and directions provide a good guide to the parameters of the timeline with each row representing a screen and each column a component of that screen. For example, the date structures are very flexible and the timeline can include a full date and time or just a year. Also, in the background column, adding a hex number for color can change the background color or including a link to image will show a background image.