By Becky Filner, Head of Cataloging

During the last two decades of the 19th century, the United States witnessed an explosion of mass-market advertising in the form of trade cards. A combination of factors contributed. Lithography, first invented in the late 1700s, made it practical to print large runs of images relatively inexpensively. Heavy paper became less expensive because it was being made from bleached wood pulp instead of cloth. The invention of the camera supplied endless images for reproduction. Advances in high-speed steam presses made it practical to mass produce trade cards, and new modes of transportation made it possible to distribute them throughout the country.[1]

This medical trade card for Pond’s Bitters (“cures constipation, headache, indigestion, biliousness, malaria, dyspepsia”) encourages the couple depicted to focus on each other and “let the dog have the lunch!”[2]

The cards pictured here are all from an extraordinary new collection. Late last year, the Academy library received The Bingham Patent Medicine Collection as a bequest. This rich collection – a complement to our William Helfand Collection of trade cards – contains approximately 4,900 trade cards produced by pharmaceutical manufacturers in the 19th century. 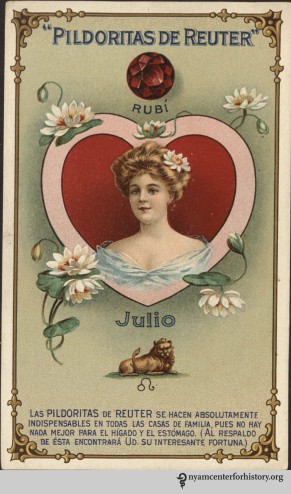 These cards advertising “El Tricofero de Barry” and “Pildoritas de Reuter” were printed in New York by Barclay & Co., but the text is in Spanish. Click to enlarge.

The late Walker Bingham was a completist, and his carefully assembled collection reflects years of assiduous collecting and research. An announcement will be made when the collection is available to the public. Meanwhile, have a look at Bingham’s book, The Snake-Oil Syndrome: Patent Medicine Advertising, for more of his cards and an excellent overview of pharmaceutical advertising. Here he writes of patent medicine:

It is probable that most of the nineteenth century patent medicines had no effect at all on the diseases that they were sold to cure. They were not even palliatives. Some sufferers may have been misled into taking patent medicines instead of more effective (and possibly more expensive) drugs prescribed by a doctor, but generally speaking, at that stage of medical learning there was often little that any doctor could do for a patient with a serious disease except give emotional support.[3]

The medicines that did have more than a placebo effect often relied on ingredients like morphine, cocaine, heroin, opium, chloroform, and alcohol. These drugs were especially dangerous when given to children or self-administered in large doses. The patent medicine business was booming in the late 19th century, and it relied heavily on advertising to attract customers since the medicines were ineffectual at best. In addition to trade cards, patent medicine companies produced millions of newspaper ads, almanacs, show cards, and other mailing pieces.

Most trade cards were designed to appeal to women and children, with sentimental images of animals, flowers, babies, families, and scenery.[4] The Valentine’s Day images below fall into this category, with roses, doves, and cherubs promoting Brown’s Iron Bitters (“Cures Malaria, Dyspepsia, Weakness, &c.”), Burdock Blood Bitters (“It makes pure, healthy blood, and regulates all the organs to a proper action, cures constipation, liver and kidney complaint, female weakness, nervous and general debility, and all the distressing miseries from which two-thirds of the women in American are suffering”), Boschee’s German Syrup (“No person suffering with consumption, coughs, colds, croup, bronchitis, asthma, or any disease of the throat, lungs or chest can take it without getting immediate relief”), and Wilson’s Popular Corn Salve (we are not told what this product does, but “every box [is] guaranteed or money refunded.”) 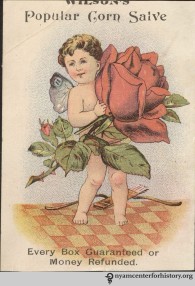 Most trade cards were designed to appeal to women and children, with sentimental images of animals, flowers, babies, families, and scenery. Click to enlarge.

Sentimental images of couples also sell products, including a trio of kissing couples selling Smith’s Bile Beans (they “cure biliousness”), two different images of couples with umbrellas, one selling Dr. P.O. Baldo’s Blood and Liver Pills and the other selling Wilbor’s Compound of Cod Liver Oil and Phosphates, and a trade card that recommends buying a bottle of Race’s Indian Blood Renovator for your new wife “to prove to her [your] fervent love.” 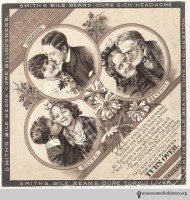 Other more satiric and risqué trade cards are clearly aimed at an adult audience. The card below, “The Five Senses,” is one of the racier examples in the Library’s trade card collection. The back advertises Lash’s Kidney & Liver Bitters, described as “a mild cathartic and sure cure for constipation, indigestion, biliousness, dyspepsia, malaria, chills and fever, nervous or sick headache.” The front of the card shows a series of five images of a woman “seeing” a man, “hearing” him approaching, “smelling” a flower he has given her, and sitting in his lap while he is “feeling” her bottom. The final image, “Tasting,” shows the edge of a bed and the woman’s dress, undergarments, and stockings thrown across a chair. Apparently taking Lash’s Kidney & Liver Bitters will ensure a happy Valentine’s Day! 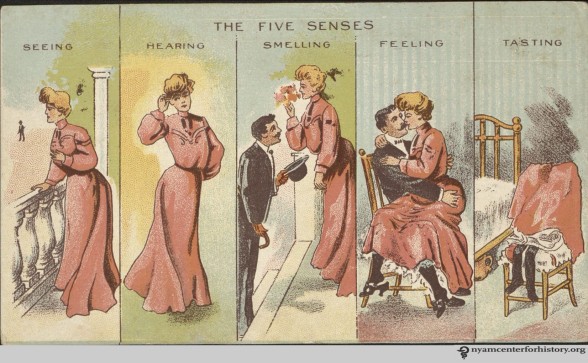 “The Five Senses” (above) is one of the racier examples in the Library’s trade card collection.

[1] Summarized from A. Walker Bingham’s account of trade cards in The Snake-Oil Syndrome: Patent Medicine Advertising (Hanover, Massachusetts: The Christopher Publishing House, 1994), p. 117-119.
[2] All trade cards in this post are from The Bingham Patent Medicine Collection in the Library of the New York Academy of Medicine.
[3] Bingham, p. 7.
[4] According to Bingham, mothers used to paste trade cards into albums as birthday or Christmas presents for their children (p. 117.)