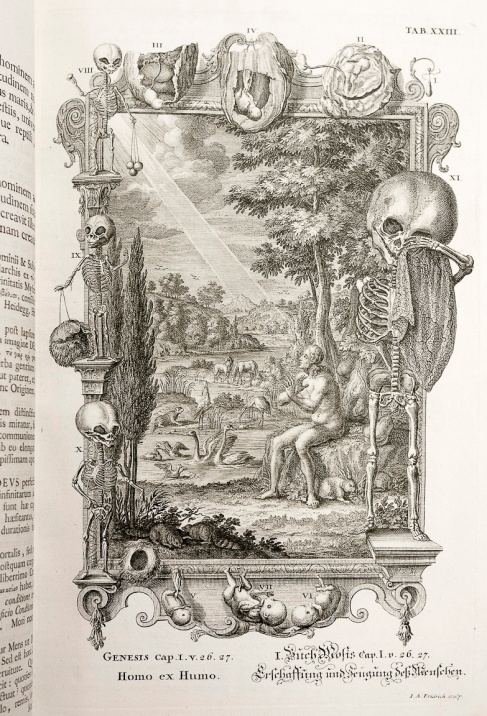 My name is Joanna Ebenstein; I run a blog called Morbid Anatomy as well as the related Morbid Anatomy Library—an open-to-the-public research collection in Brooklyn, New York—and the Morbid Anatomy Presents series of lecture and workshops. All of these projects aim to explore the intersections of art and medicine, death and culture, with a particular focus on historical medical collections and libraries.

In the run-up to NYAM’s October 5th Wonder Cabinet and Medical History Festival (which I am co-curating), I have been invited to write a series of guest posts in which I will report on the treasures and curiosities I find in my explorations of NYAM’s excellent rare book and historical collections. In this, the first of that series, I would like to focus one of my favorite books—and one of the most enigmatic books of all time—Johannes Jacob Scheuchzer’s 4-volume high baroque extravaganza of art, science, mysticism, and all worldly knowledge, Physica Sacra. 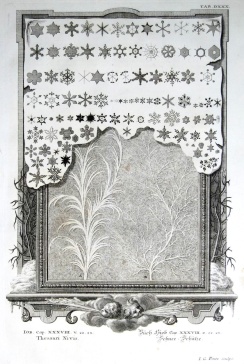 Originally published in 1731, this bizarre large-scale book features over 700 copper plate engravings. With a fine balance of careful observation and allegorical imagination, these depict—in frames each more fanciful than the last—such scenes as: lamenting fetal skeletons with the motto “homo ex humo” (‘man from the ground’, or ‘dust’); a variety of anatomical views of the human body projected on drapery or foregrounding mysterious landscapes; birds in biblical landscapes augmented by baffling cyphers; comparative snowflakes with the text “thesauri nivis” or “treasures of snow”; and much more.

These images serve as an excellent reminder that our views of science—and particularly the study of the human body—have changed over time. As explained by Martin Kemp and Marina Wallace in their book Spectacular Bodies:

The purpose of anatomical images during the period of the Renaissance to the 19th century had as much to do with what we would call aesthetic and theological understanding as with the narrower interests of medical illustrators as now understood . . . . They were not simply instructional diagrams for the doctor technician, but statements about the nature of human beings as made by God in the context of the created world as a whole . . . they are about the nature of life and death. . . .

I have not been able to find too much about this book in English, though my friend—and Wonder Cabinet speaker—Daniel Margócsy has promised a future lecture on the topic. In the mean time, Christie’s Auction House has a helpful entry on the book that explains that Johann Jakob Scheuchzer (1672–1733)—a Swiss doctor and natural scientist—”planned the Physica Sacra as an explanation of and a commentary on the Bible on natural-scientific grounds. He himself oversaw the illustrations which were largely based on his own natural history cabinet or on other famous European cabinets of rare specimens.”

Scheuchzer’s work also inspired an art exhibit at the University of Massachusetts—Dartmouth in 2007/8: “Science, Religion, Art.”  The organizers note that:

a lifelong scholar, Scheuchzer’s pursuits of knowledge were wide-ranging and diverse, from science to medicine to paleontology. Like many scientists of the late 17th and early 18th century, Scheuchzer held to the belief that the Old Testament was a factual account of the history of the earth. . . . In a period before public museums, Scheuchzer presented a seductive view of an imaginary world, viewed through lush frames depicting secondary symbols, plants, animals, heads and other objects, providing the viewer rich material for an inspired vision of the interaction between the natural and the divine powers.

Below are just a very few of my favorite images from the book, some that I photographed from the original, and others coming from the set of almost half of the 737 images from the book (!!!) so kindly provided by greyherbert’s amazing Flickr stream; you can see them all by clicking here.

Stay tuned for more posts in the days and weeks to come!