Medals, amulets, badges and prizes play many roles, whether acknowledging significant figures in their fields, commemorating events, or giving insights into beliefs about health. Over 275 medical-themed items from the collection of Dr. Ira Rezak, currently on display at the Augustus C. Long Health Sciences Library at the Columbia University Medical Center, provide a rich and varied exploration of these roles. The objects in the exhibit range from a 70th birthday medal for Louis Pasteur (1892) to a 16th century German amulet used to ward off the bubonic plague, a Canadian medal from 1994 celebrating the role of white mice in medical science, and the New York Academy of Medicine medal by Harriet Whitney Frishmuth, among many other medals representing medicine in New York. 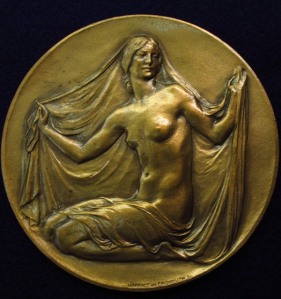 Medal of the New York Academy of Medicine, 1928, by Harriet Whitney Frishmuth.

The exhibition, Mirroring Medicine, is drawn from Dr. Rezak’s medal collection, formed over 50 years, and one of the most important in private hands. Dr. Rezak is a NYAM Fellow and Professor Emeritus of Medicine at the State University of New York at Stony Brook. The exhibition is on view until January 11, 2013 and is open from 7am to 9pm on Lower Level 2 of the Columbia University Medical Center’s Hammer Health Sciences Center. Individuals without Columbia University or New York-Presbyterian Hospital identification should make arrangements to visit the show by emailing hslarchives@columbia.edu.