The practice of trepanning, or trepanation, which involved making a hole in the skull, is one of the oldest known surgical procedures. Skulls with holes have been found from the Neolithic period, and the technique continued to be practiced by cultures across the world. The surgeries relieved swelling of the brain and skulls showing bone regrowth indicate that the treatment was survived by many.  The reasoning behind such surgeries changed over place and time, and included questions of spiritual possession, convulsions, fractures and infections.

On Thursday, December 6, the fascinating history of such surgical procedures and the development of surgery, neuroanatomy and the other neurosciences will be explored by Dr. Eugene S. Flamm at the Augustus C. Long Health Sciences Library at the Columbia University Medical Center in a richly illustrated talk “Neurosurgery Before Neurosurgery.” 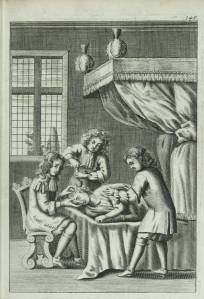 Dr. Flamm is the Jeffrey P. Bergstein Professor and Chairman of the Dept. of Neurosurgery at the Albert Einstein College of Medicine. He is an active researcher and clinician with in interest in cerebrovascular neurosurgery and spinal cord injury. Dr. Flamm is also an ardent book collector, the President of the Grolier Club, a NYAM Fellow and supporter and author of, among other works, From Skulls to Brains: 2500 Years of Neurosurgical Progress, which features many books from the NYAM collection.

More details about the event can be found here. Enquiries about From Skulls to Brains can be directed to NYAM at history@nyam.org.