Detail of student lecture ticket, for the lectures of Dr. William Darling, University of New York.  1878-1879.

Popularized in particular by Robert Louis Stevenson’s 1883 novel Treasure Island, pirates became a part of popular culture and parody pop culture beginning in the late 19th-century.  For me, more than eye patches, peg legs, parrots and treasure maps, the ultimate emblem of pirates is the skull and crossbones symbol.

I see this symbol every so often at work here in the library–which, incidentally, seldom gets attacked by pirates. As a fairly universally fearsome warning symbol, the skull and crossbones meant poison in many pharmacy books.

Take this example on a pamphlet issued by the New York City Health Department in the early 20th century on the danger of wood alcohol poisoning: 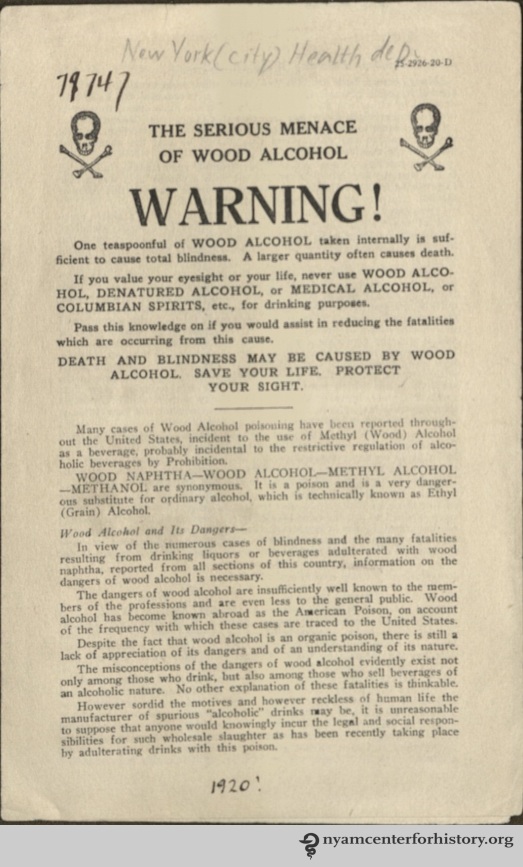 The symbol has roots in Europe in the early Christian tradition. Biblical legend holds that the bones of Adam rested at the base of Christ on the cross and so the pairing of skull and bone or skull and crossed bones was associated with funerary customs.1 Skull and crossbones decorate many catacombs and cemeteries from the Middle Ages. And you can often spot the skull and a bone or crossed bones at the bottom of Crucifixion scenes in Renaissance paintings:

Tempera painting by Fran Angelico, c. 1420-23 from the Metropolitan Museum of Art’s collections.

The symbol took to the seas as a form of shorthand for captains, who noted the sailors who died with a little skull and crossbones next to their name in the ship’s log.  In this way, seafaring folks came to associate the symbol with death–perhaps what inspired pirates to use it to terrify ships in the 18th century. Around the same time, the Catholic Church prohibited use of the symbol, now tarnished by its piratical associations.2 Not all pirates used the skull and crossbones; other flags featured hourglasses, skeletons, spears, crossed swords, and bleeding hearts. The 1720 trial of pirate Calico Jack Rackham made the symbol and its link to piracy–and by extension death–famous (funnily, his actual flag was in fact a skull and crossed swords).3

The skull and crossbones came to be associated with poisonous substances in the mid-19th century. In 1829, New York State passed a law requiring all containers with poisonous substances to be labeled. The skull and crossbones start appearing on these labels around the 1850s. The symbol was not always considered enough: bottles themselves were sometimes designed in the shape of coffins, in bright, noticeable colors, and even with raised bumps that could be felt by hand if details couldn’t be seen to alert the user.4

In the 1970s, health officials in Pittsburgh, Pennsylvania, realized that children there ingested poison far more than the national average. They surmised it was because the skull and crossbones image wasn’t a scary deterrent to them (they knew it simply as the logo for the Pittsburgh Pirates baseball team).5 This led to the introduction of Mr. Yuk as a poison warning icon, though he was voted out in 2001 by the American Association of Poison Control in favor of the skull and crossbones. The skull and crossbones also had the advantage of being in the public domain, while Mr. Yuk is trademarked.

The American Association of Poison Control’s current logo, featuring a skull and crossbones on a prescription bottle. The emoticon-like Mr. Yuk symbol, originally created by the Children’s Hospital of Pittsburgh.

Back here in the library, the skull and crossbones adorns the cover of A Treatise on adulterations of food and culinary posions. The book was published in 1820 when food adulteration was a very serious problem in London (hence the ominous warning on the cover, “There is Death in the Pot.”) Furthermore, the government would not pass regulations for nearly four more decades. For good measure, the book cover also includes two venomous creatures to warn you off suspect food substances: a spider and snakes.

Friedrich Christian Accum’s Treatise on adulterations of food and culinary poisons, published in 1820.

Our Abellof stamp collection has a group of stamps and envelopes related to anti-smoking campaigns in the 1980s.  Several of them feature artwork with a modified skull and crossbones design, converting crossbones into dangling cigarettes:

On the left, a design by the U.N. WHO Anti-Smoking Campaign for Ethiopia, 1980. On the right, a postmark of a WHO Anti-Smoking campaign first day cover from 1986. Both from the Abeloff Stamp Collection.

Here’s an ad from a 1900 issue of American Druggist for cube morphine. There is something of a mixed message here with the finger pointing your way to pain relief as well as “poison, deadly, beware!”

Below, the symbol is featured on a medical student lecture ticket. In the days before online registration and student ID swipe cards, students were issued a matriculation card upon paying their matriculation fees.6 Presenting that to various professors, they could then purchase a ticket or card to the professor’s class. 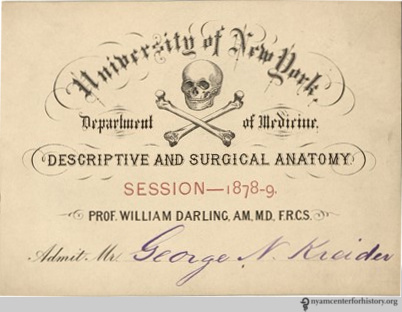 A student of the Scottish-born Dr. William Darling, George Noble Kreider was originally from Ohio, and set up practice in Illinois where he presided over the establishment of the Illinois State Medical Journal as president of the State Medical Society.

Kill you or cure you, the skull and crossbones has a checkered past and sometimes sends us mixed messages. If you do get poisoned during a pirate attack today, hurry on over to our library: we have a bezoar to cure you!

What is a bezoar, and how might it counter poison? Stay tuned for your answers in a future post.