Graduation season is quickly approaching, which means students in medicine, nursing, and the allied health professions will soon be celebrating their accomplishments with family and friends. To help celebrate, we have designed a new collection for our online shop featuring medical symbols.

Some of the symbols of health and medicine are relatively new historically, while others have a long and complex history.  Perhaps the most persistent symbol of medical care is the caduceus, the snakes coiled around a staff. The origins of the symbol go back to the classical world, where Asclepius, the god of medicine, was generally depicted carrying a staff with a snake coiled around it.  Asclepius’s staff was gradually replaced by the caduceus, which shows two snakes entwined around each other and a central staff.[1]

Asclepius’s daughter, Hygieia, was the goddess of health, cleanliness, and sanitation. Hygieia was often symbolized by a snake drinking from a bowl , and was shown in sculptures and images with a serpent entwined around her. Her chalice and bowl remain a potent symbol of pharmacy around the world.[2] 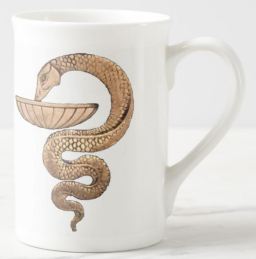 This Hygieia mug was made using an image of the brass inlay from the lobby floor of The New York Academy of Medicine.

The stethoscope, invented by René-Théophile-Hyacinthe Laënnec in 1816, only took on the binaural form familiar today in the mid-19th century after much experimentation. The double stethoscope, which allowed the physician to listen to the sounds of the body with both ears, relied on the incorporation of flexible materials such as rubber and gutta-percha to become truly practical.[3]

“The scalpel and stethoscope” was a late 19th century monthly magazine for “the surgical and medical professionals, and all kindred branches.”

Some version of a professional oath in which health professionals pledge to conduct themselves along strict ethical lines is a standard feature in most medical graduations. The most common and well-known of these is the Hippocratic Oath. The Oath is commonly dated to the fourth century BCE. Its original form was modified in Christian Europe in the medieval period, and has been in use in one form or another ever since, becoming particularly prevalent in the post-World War II era.[4]

An early 20th century illustration of the Hippocratic Oath.

You can find these and other symbols on a range of products in our online shop’s Graduation Collection.  All proceeds from the Library shop support the preservation of the Library’s collections and its public programming in history, the humanities and the arts.