Today we have part two of a guest post written by Dr. Jaipreet Virdi-Dhesi, the 2016 Klemperer Fellow in the History of Medicine at the New York Academy of Medicine and a SSHRC Postdoctoral Fellow in the Department of History at Brock University in St. Catharines, Ontario. She is working on her first book, Hearing Happiness: Fakes, Fads, and Frauds in Deafness Cures, which examines the medical history of hearing loss and “quack cures” for deafness. Some of these cures are explored on her blog, From the Hands of Quacks. You can find her on twitter as @jaivirdi. 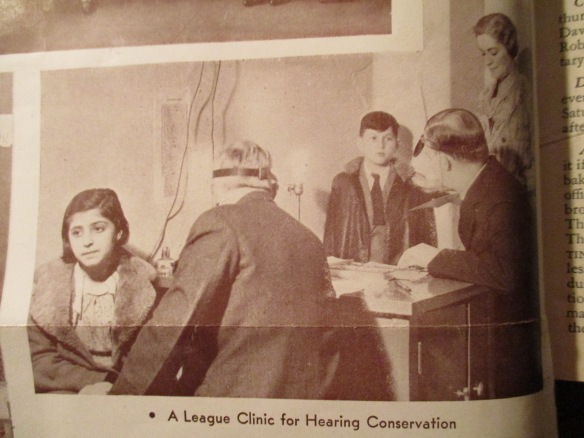 Promotional photo by the New York League for the Hard of Hearing and its hearing clinic for testing and examination (The Bulletin, Dec. 1935)

The New York League for the Hard of Hearing launched several campaigns during the 1930s addressing the “psychological aspect” of acquired deafness mentioned by Wendell C. Phillips. Since deafness is an invisible affliction, Phillips emphasized the deafened person often feels isolated and unable to adjust to the sensory change, especially if the hearing loss occurred suddenly. Other otologists agreed as many patients narrated similar stories: their hearing was perfectly fine and normal, then one day something happened and they became deaf, and the process of coming to terms to the newfound deafened state was a difficult one. Illness such as influenza, pneumonia, meningitis, diphtheria, scarlet fever, measles, or ear abscesses were usually the culprit. So too were heard injuries, age-onset deafness in the elderly, misuse of drugs such as quinine, a poor diet (including too much sugar), and other ordinary factors:

“It is well to bear in mind the effects of hair-dyes, excessive smoking or drinking, and indeed, improper underwater swimming and diving. Vigorous blowing of the nose is also frequent causes of hearing impairment.”[1]

Otologists claimed individuals needed to take responsibility for their hearing—to conserve what hearing one had, through proper diet, lifestyle, and hygiene, before it disintegrated. This was a remarkable shift from the 1920s “prevention of deafness” campaigns that concentrated on a screening program of early detection and medical care. While constant surveillance was still promoted, the late-1930s campaigns transformed hearing loss into an affliction that could easily be treated or managed by good habits.

Pamphlets reveal how parents were encouraged to become more “ear-minded” toward their children, that is, to pay attention if their child exhibits any signs of hearing loss, to avoid a circumstance in which a neglected hearing issue ends up turning a deafened child into a problem. 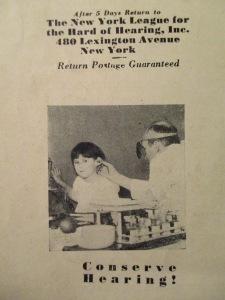 Advertisement for the New York League Hard of Hearing (The Bulletin, 1934). 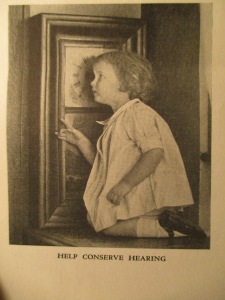 Advertisement for the New York League for the Hard of Hearing (The [Hearing] News, October 1935)

In other words, the “problem of deafness” became less about the triumphs of medical cures for hearing loss or social organizations providing communication services, but more about conserving one’s hearing before it was gradually diminished. Themes for “Better Hearing Week” especially reflect this: the 1937 theme was “It’s Sound Sense to Conserve Hearing,” while the 1938 was “Help Conserve Hearing.” 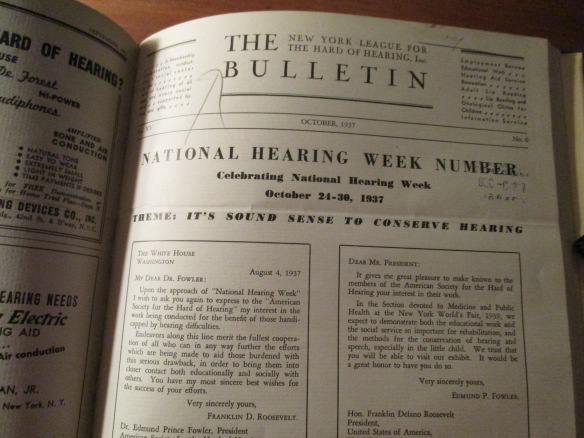 Front page of the October 1937 issue of The Bulletin magazine, promoting the National Hearing Week, with reprints of letters from FDR

The American Society for the Hard of Hearing also launched their own campaigns. In 1937, the organization listed a four-point program publicizing their mandates: the prevention of deafness, the conservation of hearing, the alleviation of social conditions affecting the hard of hearing, and rehabilitation. In addition to popular radio broadcasts on the National Broadcasting System, 327 feature articles and 189 editorials were released in over 1600 newspapers. 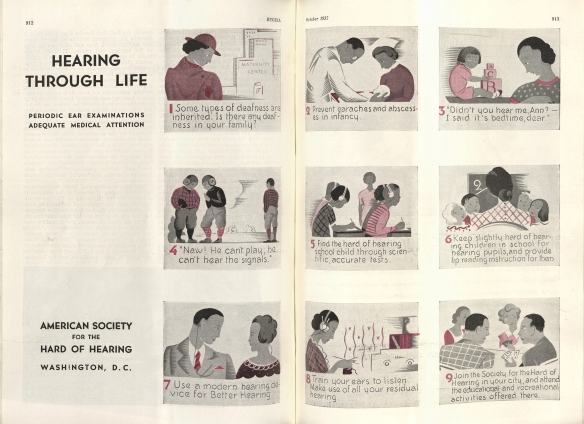 “Hearing through Life,” a national campaign launched by the ASHH (Hygeia, October 1937).

The publicity campaigns of the 1920s and 1930s were really about transforming public perceptions of the hard of hearing and deafened as handicapped persons, rather than as “defectives”—an important observation in light of the eugenicist concerns of the period. But they were also about addressing hearing impairment not as a social or educational issue, but as a public health issue, one that required cooperation between different levels of civic infrastructures. As otologist Edmund Prince Fowler noted in 1940, the hearing impaired “should never be dismissed with the thought, “Nothing can be done.”[2] 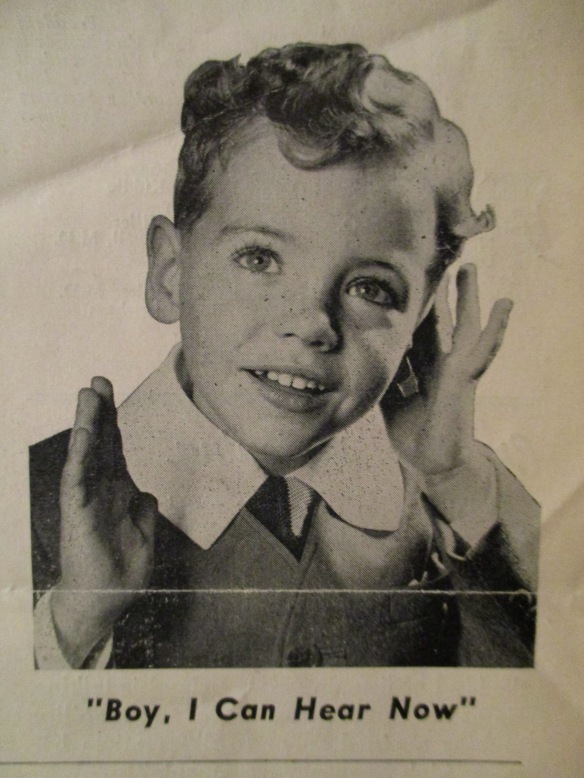 Promotional photo for the League’s “Children’s Auditory Training Project” campaign of the 1940s (The Bulletin, Nov-Dec, 1949)

Special thanks are owed to Arlene Shaner at the NYAM Library for her generous research assistance and lively conversations.