One X-ray-related movie scene stands indelibly in my mind: Henri Charrière (Steve McQueen) getting X-rayed in the escape-thriller Papillon. While purchasing his escape from a French penal colony in the 1930s, Charrière dutifully submits to being X-rayed. He lies down, a photographic plate is put under his head, and a big glowing tube is brought near, which then glows even more brightly and loudly crackles for many, long seconds. The scene is repeated with Charrière on his stomach, a new plate next to his chest, and the tube right over his back. When I first saw this film, this X-ray scene brought out loud gasps in the audience. To me, the scene still captures some of the wildness, improvisation, and, viewed through today’s eyes, danger of early X-rays. 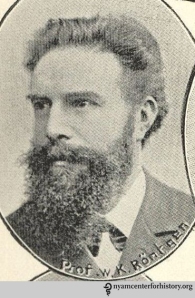 Wilhelm Röntgen. From the frontispiece to Charles E. Phillips, Bibliography of X-ray literature and research, 1896–1897.

X-rays were discovered on November 8, 1895, by Wilhelm Röntgen (1845–1923) of the University of Würzburg. Quite serendipitously, he found that an active vacuum tube, shielded with a cardboard sleeve so that no visible or ultraviolet light could come out, caused fluorescence on a light- and UV-sensitive screen some distance away. When he inadvertently passed between the tube and the fluorescing screen, he saw a projection of his own skeleton. As X-rays (as Röntgen named the effect; others later called them Röntgen-rays) also affected photographic plates, these ghostly images could be fixed. The first published X-ray was of the human hand, that of his wife Anna Bertha Röntgen. Röntgen presented it in a formal paper at the end of December 1895. A Viennese newspaper picked up the story on January 5, with international papers following—The New York Sun covered it on its front page on January 7—and Röntgen and his rays became a world-wide phenomenon. For his work, he received the first Nobel prize in physics in 1901.1 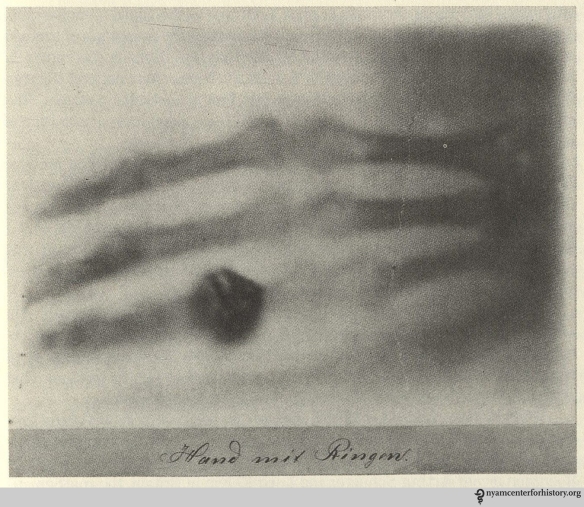 X-ray of the hand of Anna Bertha Röntgen. Image from Bettyann Holtzmann Kevles, Naked to the Bone: Medical Imaging in the Twentieth Century.

The X-ray’s medical potential was glaringly obvious. By early February the first medical uses of X-rays began to make their way into the published literature. It wasn’t hard to work with X-rays: vacuum tubes and photographic plates, the basic tools, were readily available. In the United States, three different institutions made claim to the first documented use of X-rays for medical purposes. Likely the very first was at Dartmouth (like many claims of priority, this has its competitors) where two faculty brothers, Gilman and Edwin Frost, a physician and a physicist, respectively, took an X-ray of a local boy with a broken arm. Edwin mentioned this case in his February 14 article in the premier journal Science—the first known published American reference to medical X-rays.2 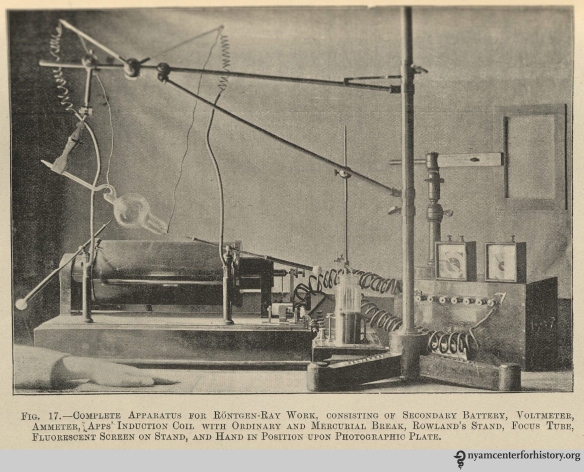 An 1897 set-up for taking an X-ray of the hand. David Walsh, The Röntgen Rays in Medical Work, opposite page 36. 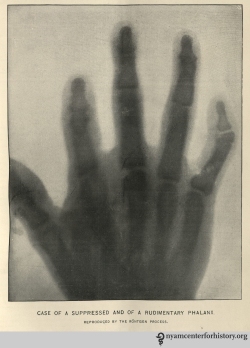 Perhaps the first published X-ray in the United States of a clinical condition. In “Rare Anomalies of the Phalanges Shown by the Röntgen Process,” Boston Medical and Surgical Journal 134(8), February 20, 1896: 198–99.

Two other institutions also took early medical X-rays, in each case resulting from a doctor- physicist pairing. New York surgeon William Tillinghast Bull brought in a case of a person shot in the hand to Columbia scientist Michael Pupin.3 And in Boston, physician Francis Henry Williams, who was both an MIT grad in chemistry and a Harvard Medical School–trained physician, asked MIT physics professors Ralph R. Lawrence and Charles L. Norton to take X-rays of patients. Though unsigned, some attribute a February 20 article in the Boston Medical and Surgical Journal to him, which provides the first published X-ray in the United States of a pathological condition.4 Yale physicist Arthur Williams Wright also did early X-ray work, but not in a medical context.5

The speed with which this technology developed medically is breathtaking. In 1897, British physician Dr. David Walsh—who already identified himself as honorary secretary of the Röntgen Society of London—published The Röntgen Rays in Medical Work (reprint ed.: New York: William Wood and Company, 1898), almost 150 pages of instructional anatomy, physiology, and legal medicine. The American Roentgen Ray Society was founded in 1900, and became a forum for working out some of the safety concerns about X-rays. By 1901, Boston physician Francis Henry Williams (who had done that early work with MIT) oriented his practice completely to the topic, as shown by his magisterial 650-page book, The Roentgen Rays in Medicine and Surgery: As an Aid in Diagnosis and as a Therapeutic Agent, Designed for the Use of Practitioners and Students (New York: The Macmillan Company, 1901)—the first of three editions and, in five years, his eighth book on the subject. 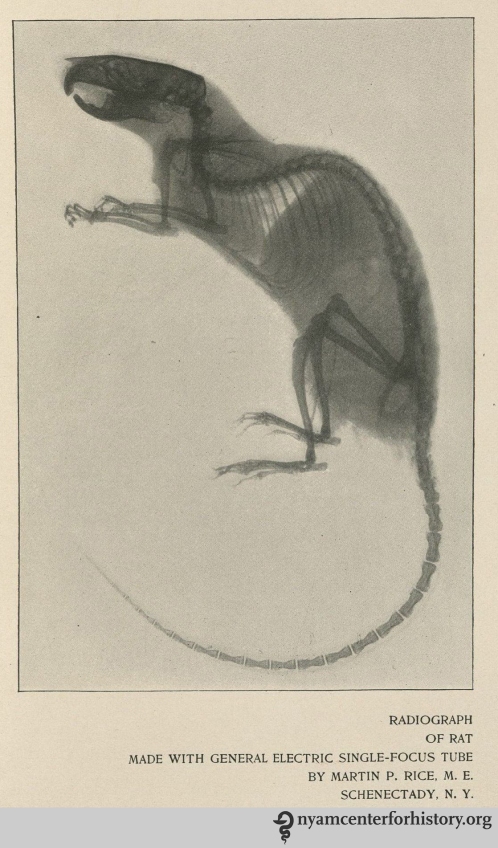 From the sales pamphlet, Roentgen Ray Apparatus, published in June 1897 by the Edison Decorative and Miniature Lamp Department of the General Electric Company, Harrison, NJ.