After the snowstorm on January 22–23, 2016 dropped 26.8 inches of snow on New York City, lists circulated of the worst snowstorms in the city’s history dating back to 1869. Of the top ten storms, only one occurred in the 19th century: the blizzard of 1888, which resulted in 21 inches of snow falling on the city from March 12–14 of that year.

The blizzard arrived unexpectedly. The forecast for Sunday, March 11 called for slight wind and evening rain. But late that night, a storm from the south altered its course at the same time that the wind changed direction. Rain turned to sleet, hail, and finally snow. New Yorkers woke up on Monday to 10 inches of snow and bitter cold.

“Looking north on Madison Avenue during the March 1888 Blizzard.” From Strong, The Great Blizzard of 1888.

Not realizing that the worst was yet to come—11 more inches of wind-swept snow fell before the storm ended—many ended up stranded on their way to work or school. Eighty mile an hour wind gusts blew snow into drifts as high as second story windows and, along with the snow and ice, stopped elevated trains and toppled phone, electric, and telegraph poles. After the suspension of ferry service, people attempted to cross the frozen East River on foot (many were rescued by tugboats). More than 200 New Yorkers died as a result of the storm.1,2 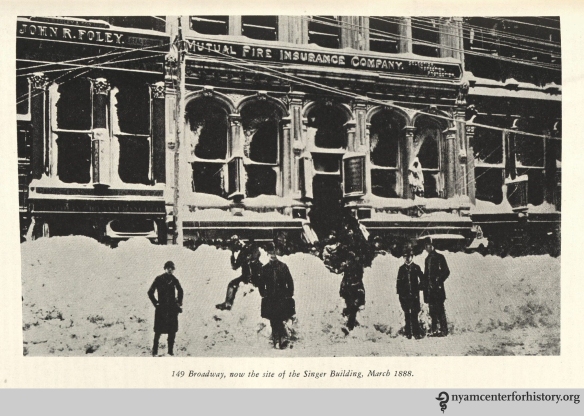 In 1938, fifty years after the blizzard, Samuel Meredith Strong, M.D., “Former President of ‘The Blizzard Men of 1888,’” published The Great Blizzard of 1888, a collection of oral histories and printed articles from those who survived the storm. Below are some selections from the book:2

Excerpt from an article by Julian Ralph in the New York Sun, September 2, 1933:

“Few of the women who worked for a living could get to their work places. Never, perhaps, in the history of petticoats was the imbecility of their design better illustrated. ‘To get here I had to take my skirts up and clamber through the snowdrifts,’ said a washerwoman when she came to the house of the reporter who writes this. She was the only messenger from the world at large that reached that house up to half-past 10 o’clock. ‘With my dress down I could not move half a block.’ It was so with many thousands of women; the thousand few who did not turn back when they had started out.”2

“Mount Olivet Cemetery at Maspeth, New York, had two orders for burials to take place that day, and the Superintendent had men with a small plow drawn by horses work to keep the roads in the cemetery open. Along about ten o’clock he got me on the job shoveling, and after dinner sent me for men in the neighborhood. I think I got two or three and with others and the plows we worked until about 4:30 in the afternoon, but it was no use as the wind blew the snow back faster than we could handle it. We quit, licked to a frazzle, cold and tired and hungry. The funerals, according to the records in the cemetery, did not take place until two or three days later.” 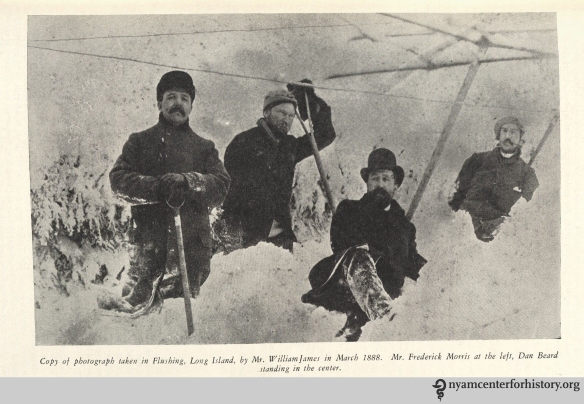 “Copy of photograph taken in Flushing, Long Island, by Mr. William James in March 1888. Mr. Frederick Morris at the left, Dan Beard standing in the center.” From Strong, The Great Blizzard of 1888.

“I was a resident physician at the New York Infant Asylum in Westchester County, N.Y. At this institution there were a few over 400 children and about 200 mothers. The age of the child population ranged from infants of a few weeks to children five or six years of age. Among those under one year were perhaps 100 who were partly or entirely dependent on cow’s milk feeding. Eight cans of loose milk a day were supplied by a dairy eight miles distant, the milk being delivered in a horse-drawn truck—then came the big blizzard completely blocking traffic of every nature—in our case for seven days. I well remember the consternation and alarm at the thought of being cut off from all food supplies with over 600 people to be cared for. A few days before the historic storm, through error a large consignment of Borden’s condensed milk arrived at the institution. Twelve dozen cans had been ordered and 12 gross (1728) cans were received. Our greatest anxiety naturally centered on the bottle fed; the condensed product was at once brought in to use and a blizzard feeding plan was inaugurated through dilution with barley water. Greatly to our surprise the marasmic and difficult feeders, struggling along on diluted sterilized milk, took on new life, began to smile and gain in weight.” 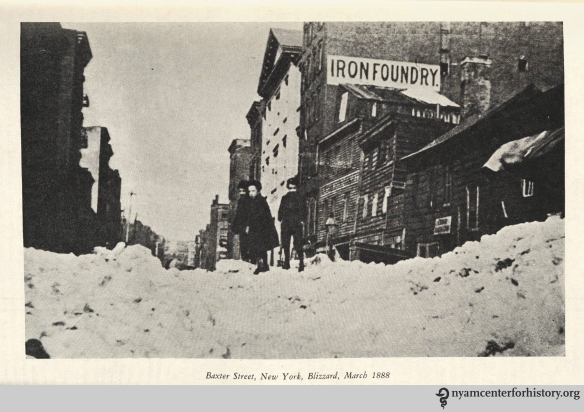 At that time I had a room on West 24th Street. I was employed as bookkeeper by a firm on Beach Street and started for work at 8:00 o’clock on that morning, taking the 6th Avenue elevated railroad from West 23rd Street. The train proceeded slowly until we reached the curve at Bleeker and 8th Streets when we came to a standstill and remained there until 3:00 o’clock in the afternoon without any heat in the car. About that time a man appeared on the street from a corner saloon with a long ladder which he placed against the elevated railing. The railing being coated with ice it was a difficult matter to climb over and reach the ladder. I recall carrying a young woman and, missing my footing partly down, we both landed in a snow bank. The man charged us fifty cents for the privilege of using his ladder.”

Hotel Martin 17-19 University Place, corner of 9th Street during the March 1888 Blizzard. Abandoned horse-car.” From Strong, The Great Blizzard of 1888.

“Through the long lone hours of that night we were blessed with our eleven pound boy, without nurse or doctor.… Next morning we found we were completely snowed in. My husband started to shovel his way out, through snow as deep as he was tall….It was three weeks before the roads were cleared and the Doctor then made his first visit to our home and congratulated me on the fine new baby who came into this world unaided and alone in the Big Blizzard of 1888 and twenty-six years and six months later left this world in the Wright chemical explosion [an accident at a factory in Elizabeth, NJ that killed three workers3].” 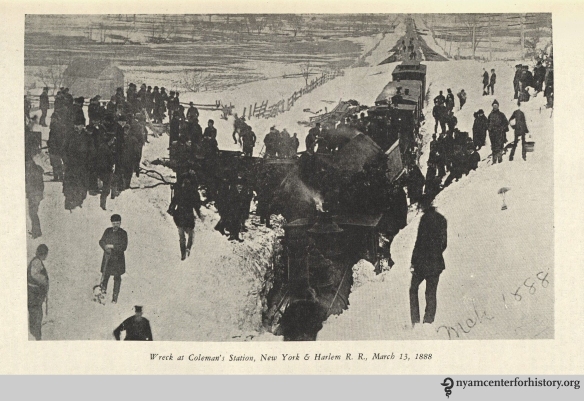 The next time a blizzard comes to New York, be grateful for modern weather forecasting technology and heated subway cars. And don’t try to cross the East River by foot!