Alois Alzheimer in 1884. In Maurer, Maurer, and Levi, Alzheimer: The Life of a Physician and the Career of a Disease, 2003.

Eminent German scientist Aloysius “Alois” Alzheimer was born on June 14, 1864. He considered himself a psychiatrist, because he “not only introduced the art of microscopy into psychiatry, but also contributed to psychiatry’s greatest interest in talking with patients.”1 His early work was at the Asylum for the Insane and Epileptic or “The Castle of the Insane,” where he spent hours listening to and examining patients, documenting each case.2 He also became a court-appointed forensic physician, treated private patients, and performed histological research.

While at the Asylum for the Insane and Epileptic, he met Auguste D., a 51-year-old wife and mother with symptoms of forgetfulness and jealously, whose husband could not take care of her anymore. Her case was curious because she was so young and had led a relatively healthy life. Senile dementia had been documented in patients in their 70s and 80s but none declined so rapidly as in Auguste D. in her last 4 years.

Alzheimer resigned from the asylum in 1903 and began work at the Psychiatric Clinic on Nussbaumstrasse in Munich under pioneering psychiatrist Emil Kraepelin. Much of Alzheimer’s early work focused on dementia caused by syphilis. Working with Kraepelin, he delved much deeper into the presenile dementia he first noted with Auguste D. at the asylum, what was to become the pinnacle of his career.

Together, Kraepelin and Alzheimer wanted to prove that psychiatric symptoms could be traced back to physical causes in the central nervous system.3 But when Kraepelin presented this hypothesis at the annual meeting of German Association for Psychiatry in 1906, they were not taken seriously. In April 1906, Auguste D. died and Alzheimer acquired her brain and clinical records. He began to compile his evidence of their “anatomical doctrine.”4 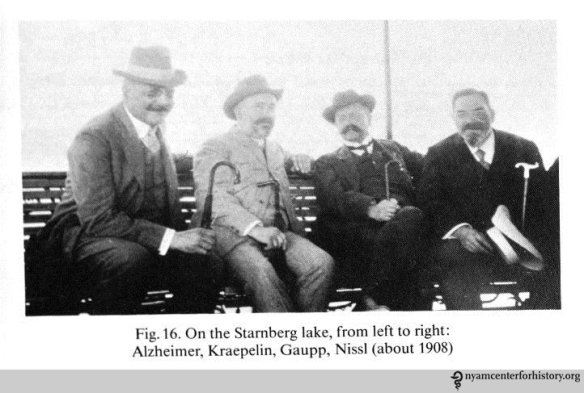 Left to right: Alzheimer and Kraepelin with psychiatrist Robert Gaupp and neuropathologist Franz Nissl, circa 1908. In Kraepelin, Memoirs, 1987.

With this doctrine, Alzheimer became the first person to describe the plaques and neurofibrillary tangles now known as indicators of Alzheimer’s disease.5 But the first article, published in 1906 in Zeitschrift fuer Psychiatrie und Psychisch-Gerichtliche Medizin, “Ueber eine eigenartige Erkrankung der Hirnrinde” [About a peculiar disease of the cerebral cortex], was not well received and garnered little attention. A second longer article published in 1911 in Zeitschrift fuer die gesamte Neurologie und Psychiatrie, “Ueber eigenartige Krankheitsfaelle des spaeteren Alters” [On peculiar cases of disease at higher age], drew much more attention. It included histological drawings of the tangles of the disease progression. Soon, other reports of similar cases started to appear in the literature.6 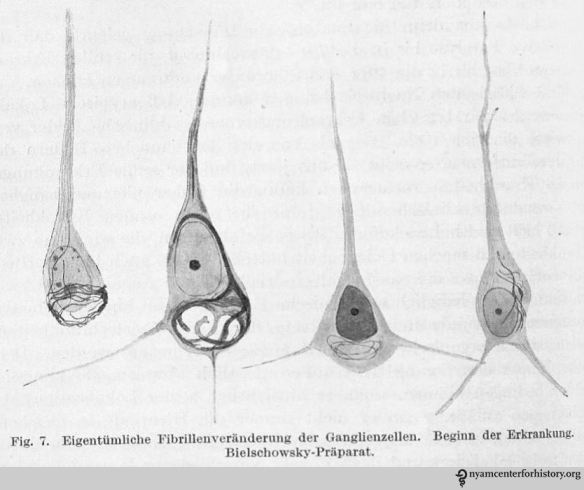 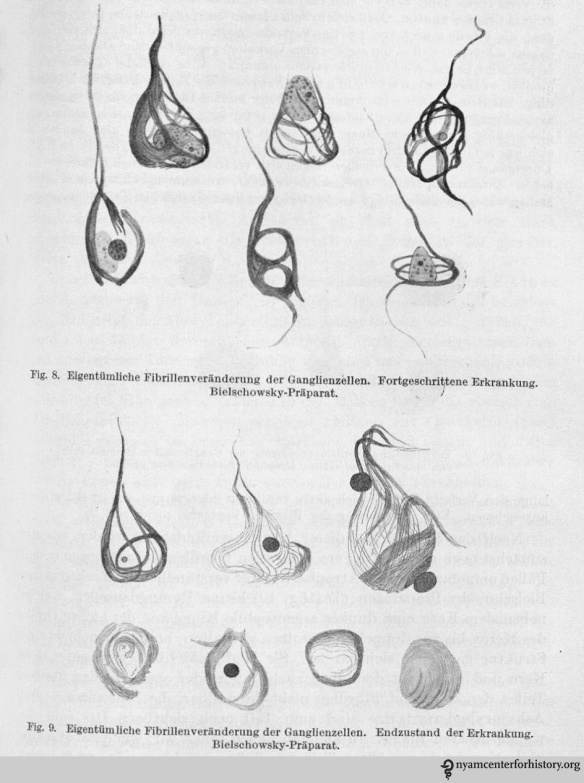 Kraepelin named this new dementia after Alzheimer in the 1910 edition of his psychiatry textbook, Psychiatrie: Ein Lehrbuck für Studi[e]rende und Aerzte. They worked together from 1903 to 1912, when Alzheimer left to become chair of psychiatry at the Psychiatric Clinic in Breslau. Alzheimer died in 1915, at the age of 51, after a serious illness. During the course of his career Alzheimer made strides in the understanding of other diseases, such as epilepsy, and his work serves as the foundation for the continued development of a cure for the disease.7

1. Maurer K, Maurer U, Levi N (Trans.). Alzheimer: The Life of a Physician and the Career of a Disease. New York: Columbia University Press; 2003.